With a permit from the Imperator, Hazama visited a laboratory that hosted Nu-13. He interrupted the scientists there who had just managed to finish the second part of her creation, and showed them his permit that would allow him to take Nu away from the area. After having slyly insulted the researchers, he was guided to the room where Nu lay, and Hazama traced his finger over her clavicle, remarking that she truly is the 13th device. He soon departed with Nu in tow. [1]

Sometime during the civil war, Hazama was visited by Relius, who told him about the possibility of the Burning Red Grimoire being inside the Military Academy. Upon hearing this news, he travelled to the Academy. [2] When he arrived at the cauldron of the city, he found Cypher Albar holding the Grimoire over the bodies of Shiori Kirihito and Mai Natsume. He seemingly killed Cypher, and took the Grimoire after looking down at Mai, making special note of her existence. Hazama soon left, not being found by Chachakaka when she travelled to the area later. [3]

After the war ended, Hazama found Meifang bathing and told her that he was interested in what she was transporting to the 13th Hierarchical City of Kagutsuchi. She attacked him, and Terumi assaulted her. [4] Hazama watched as Meifang, with a group of Fuzzy, battled against Jin and Mai, seeing her trying to turn herself into a Nox Nyctores. Eventually, Meifang lost, and Hazama noted that the event was generally uninteresting, but nonetheless left with Nine the Phantom. [5]

In the afternoon of the 30th of December, Hazama made his way into the 13th Hierarchical City of Kagutsuchi on board of an Ars Magus vessel. He travelled there with Noel under the guise of being her superior for retrieving Jin, who had gone AWOL. At the Kagutsuchi Port, Hazama made Noel aware of Ragna's presence throughout the city, telling her that she could attempt to apprehend him, but that he didn't care - instead, he was to make his way to the NOL branch and continue with his "mission" to search for Jin. All the while, he was being watched by Rachel Alucard. [6]

Around midnight at the top of the NOL branch, Hazama called Relius, telling him that all the preparations had been completed. After the call had ended, the Captain briefly spoke with Terumi, the both of them lamenting over the amount of effort they had exhausted into this timeloop. The following afternoon, Hazama saw that Jin had begun to assault Noel, and he created a smokescreen to save her from Yukianesa's fatal slashes. Having escaped, Hazama told her to not aggravate the Major, and she should wait until night when Ragna would be likely to attack the NOL branch. He entangled her in more lies before leaving her with searching for Jin again before the day ended. [7]

Inside the Cathedral, Hazama found Noel next to Jin's unconscious body. He startled her and began to prepare arrangements for Jin to be taken on board of an Ars Magus vessel under the care of Ellen Nelson. After manipulating Noel into venturing deeper inside after Ragna, Hazama began to laugh loudly to himself. [8] He walked deeper inside the facility, finding himself at the Sheol Gate and witnessed that Noel had broken the timeloops by saving Ragna from Nu-13 - she had become the Successor of the Azure. Hazama allowed Terumi to take over and forced Noel to Observe him. Hazama and Terumi had finally mind-melded and they left the facility after damaging it with Ouroboros and briefly fighting Iron Tager. [9]

A soldier of the Novus Orbis Librarium belonging to the Intelligence Department. His rank is Captain. Hiding his "true self" behind a gentle demeanor, he returns to the region of Ikaruga for certain purposes of his own. As of yet, there are none who notice his secretive actions or his true plan. [10]

Hazama went congratulate Tsubaki on her promotion to Major, but was dismissed by her after giving her orders from the Imperator to go to Ikaruga. As he left, he was found by Litchi. Mocking her and asking if she'd like her memories taken away by Mind Eater, Litchi rejected him, stating that she would not become like Tsubaki. When she left, Hazama was found by a different person – Relius. The Colonel assured him that Phantom would be fine, her vessel being sustained by Izanami herself.[12]

Both Hazama and Tsubaki went to the 6th Hierarchical City of Yabiko meeting Kagura Mutsuki. He handed Kagura an imperial decree allowing both him and the Major the ability to use Kagura's resources as they acted as the will of the Imperator. The entire time, Hazama coldly addressed the Colonel, so Tsubaki reminded him of his place. As the two of them left Kagura, Hazama asked the Colonel how his cat was doing, letting him subtly know that he knew Kokonoe was in Yabiko's NOL branch.[13] Hazama watched as Ragna battled Tsubaki, and then Hakumen, but battled neither, instead having Phantom teleport both men to different locations. He had Ragna battle Nu to help prepare her and then waited for Izanami's Phenomenon Intervention to reset time to a few days before.[14]

Hazama and Terumi managed to infiltrate the Realm where Noel was beginning to accept her power; they gained access through the tiny rip in the area that Rachel had created to access it herself. The duo had Nu face against Mu and told her that power is power, only being sought so people can feel superior to others. As the Realm collapsed, they left.[15] In Ishana, Hazama watched over the Battle of Ragna the Bloodedge, remarking that Kagura was stronger than he expected.[16]

Both Hazama and Terumi made their way to the Colosseum, finding Ragna. They battled him and won, but they met someone they did not expect – Celica A. Mercury. Her mere presence caused them to get extremely sick and they demanded that Phantom teleport them away.[17] Once he had finished his mission of erecting the barrier completely over Ikaruga, Izanami gave him the job of gathering everyone into it, and he watched as she ordered Phantom to destroy the Takamagahara System.[18]

Hazama later stood on top of the Monolith, but he had been separated from Terumi during this time thanks to the plan of the Six Heroes and Rachel. Regardless, he summoned the Amaterasu Unit into the world thanks to the efforts of Nu.[19] Distracted as Terumi had to fight someone on Hakumen's level, Hazama was fatally attacked by Trinity, leading to Terumi's supposed death at Hakumen's hands. Before he could die, he stabbed Trinity, dragging her and the body of Platinum the Trinity into a nearby lake, where they were all presumed deceased.[20]

Alongside Terumi, Hazama was sent to secure several areas around the Ikaruga Region to prepare for Doomsday. He was called by Relius, who asked an unknown favor.[21] He later saw Azrael with Nu in Downtown and jokingly asked if there was going to be a marriage proposal. [22]

Hazama visited Relius in an underground laboratory and told him that Litchi had managed to slip their grasp and contact Kokonoe. He asked if he knew about Bullet and Bang, not being surprised to learn that Relius had accounted for their roaming since they possessed the Phoenix: Rettenjo. He looked at Arakune, who was in the corner of the room, and called it a disgusting pet. [23]

A shadow of Hazama was created by Phantom to battle against Hakumen and Trinity. Her pure hatred for the man made the shadow almost identical to the real thing, which repeatedly taunted Trinity by acting like Kazuma Kval, cruelly playing with her feelings.[24]

Along with many others, Hazama was absorbed into the Embryo, although the details of his memories being altered remain hazy. He met Terumi in Kagutsuchi's NOL branch, and was detailed about the events that had transpired with everyone being taken into the Embryo and the circumstances both he and everyone else was in. [26] He eventually found Noel in Roningai, and directed her to the Kaka Village under Terumi's orders. [27] Much later on, Hazama visited Kagura, and was taken by Noel to Ragna's cell in the NOL branch where he interrogated Ragna, binding him with Ouroboros and revoking several of his traumatising memories. He stopped when the branch was under attack [28], and made his way to the cauldron where he watched as Nu and Noel battled and then as Ragna took Noel's place. [29]

He was transported with Terumi to Ikaruga by Nine and was told that killing Izanami would grant him a piece of the Azure. He began discussing things with Terumi, finding out that his wish was to fuse with him and that the Azure could do just that. [30] In Kazamotsu, he found Noel and Mai – pretending to have orders from higher up, he attempted to arrest the former but was stopped by the latter; despite Mai's best efforts, Hazama soundly beat her. Sadly, for Hazama, he was stopped by Kagura and was forced to give both of his victims up. [31] 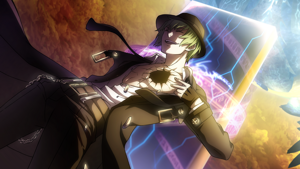 Somehow, Hazama found himself in an alternate version of the Embryo, finding Mu-12 within it. He took her to the Altar above Kagutsuchi and waited for Ragna to appear – when he did, Hazama told him about his desire to feel pain, and showed the “scar” on his chest before ordering Mu to kill him while he escaped. [32]

Hazama fought Izanami and claimed his piece of the Azure [33], later finding Terumi and demanding that they fuse using the Azure piece so that Hazama can be in control and experience true power, if only for a while. [34] Terumi later used the Hihiirokane to separate himself from Hazama, and the two parted ways after Terumi absorbed it into himself. [35] He later found Rachel within the frozen space-time, and bound her near a cauldron with the same device he used to torture Saya. He left her there, wondering what would happen if he cut Rachel into pieces and threw them into the Boundary. At some point, he came back, telling her that Izanami had been defeated, acknowledging that the vampire had suffered enough pain to die over ten times already. [36] He saw Relius off as the puppeteer jumped into the Boundary. [37] 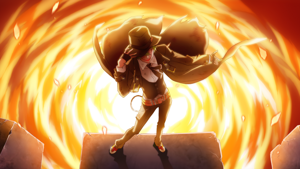 Off to a new “possibility”

Hazama was soon found by Ragna, where he revealed that he had tortured Saya years before, and that he was currently torturing Rachel to his heart's content. The two battled, and the hatred Ragna held towards Hazama allowed him to activate his own Azure Grimoire. He was defeated and nearly killed by Ragna had Naoto Kurogane not intervened. Hazama then jumped into the cauldron after telling Trinity how much he hated her eyes. [38]

Hazama reappeared in the Bloodedge Experience possibility. For unknown reasons, he appears much younger, looking like a teenager, and is seemingly aligned with the Mitsurugi Agency. He appeared in front of Valkenhayn and Relius when they apprehended Saya Terumi.[39]