Akira was born as the son to a rich family. His parents work overseas, leaving him to fend by himself, although he receives a steady stream of money from them. He is a childhood friend of Touya Kagari and Hinata Himezuru and attends Hakuo North Academy in Shin Yokozaki City.

Akira first appeared arriving late to meet Touya and Hinata due to a teacher lecturing him. He returned a data stick containing news reports on the serial killings happening at the time that Touya had let him borrow. Touya then began reading an article about the Wadatsumi Incident and Akira stole his phone to look at it, telling Touya not to worry about the past. After Touya left for his part-time job, Akira and Hinata discussed the fact that Touya felt the need to pay rent despite her and Yuki Himezuru seeing him as family. Realizing it was almost 5, Hinata said goodbye to Akira so she could get to the market before the sales ended. Once she left, Akira remarked that Touya should stop making Hinata worry and realize the Wadatsumi Incident wasn't his fault. 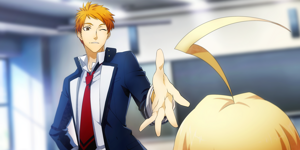 The next morning, he met with Touya and Hinata on the way to school. He wanted to know why Touya was acting like he was hiding something. When Hinata explained poorly he gets the wrong idea about Touya and Es, causing Akira to become jealous and angry. After Touya finally managed to explain himself, Akira told Touya to be more careful. [1]

At Hakuo North Academy, after homeroom ended, Akira came over to Touya's classroom and demanded to know what Touya's relationship with Es was. When Es said she was “to be in constant contact with Touya,” Akira misinterpreted her words, making him furious. Touya could only yell that it wasn't like that. Touya eventually managed to explain the situation to Akira, relieving him. Akira then briefly hit on Es but she was just confused by his introduction and him saying he hoped they could be friends. Touya, Hinata tried to explain the concept to her.[2]

Later that day, Akira ended up getting cornered by some thugs, including Akio Osafune. However, he was saved by the arrival of Kuon Glamred Stroheim, who easily defeated the thugs. After Akio fled, Touya explained to Akira and Hinata about Unions and Akira promised to be careful. [3]

The next morning, Touya told Akira about Kuon staying with him and Akira joked about Touya's luck. He got angry that Touya complained about forcing Yuki to take in more people. When Touya saw Mei Amanohokosaka and Mei said she would protect him in Kuon's place, Akira remarked that Touya was very popular. [4]

While having lunch, Akira got into an argument with Kuon about her complaints about Hinata putting shitake mushrooms in her lunch. [5]

After school the next day, upon learning that Hinata would be making sukiyaki since Yuki was coming home, Akira complained because he missed family dinners. He accepted Hinata's invitation to join them for dinner. He told Touya about his parents' job. He then went to bring the meat while Hinata, Touya and Es went shopping. At dinner, he and Yuki got into a fight over the beef. Akira was very excited at Yuki's promise to take everyone to the pool the next day and the prospect of seeing the girls in swimsuits. At the pool, he enjoyed himself and comments that he's exhausted at the end. [6]

Later, he invited Hinata to go shopping with him, which she accepted. While shopping, they ran into Touya, Kuon and Elise von Klagen, who introduced herself to him. Akira said that he invited Hinata because he was looking to get a gift for a girl and wanted her to help him pick one out. Kuon and Elise figured out his intentions and dragged Touya away to leave the two alone. When Kuon attacked Acht, Hinata came running to Touya despite Akira's warnings. He then left on his own, texting Hinata that something came up.

That night, Akira angrily recalled Hinata running to Touya and his inability to do anything. He ran into the thugs from Akio's gang, who beat him up. He was then approached by Acht, who played on his desire to get stronger to protect Hinata and convinced him to let her turn him into a Union. [7]

The next night, when Acht kidnapped Hinata, Akira appeared and restrained Es, who was planning to kill Hinata if it meant reaching Acht, with his Drive. He then told Acht to leave Hinata alone so she departed. He incapacitated Es and attacked Touya, saying it was all his fault. He knocked out Touya but was interrupted by the arrival of Kuon, Mei and Elise. He briefly regains his sanity and, upon realizing what he'd done, he ran off. 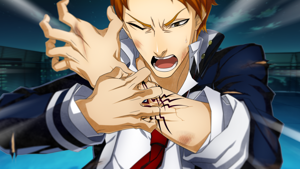 Ripping out his crystal

The next night, he called Touya and told him to come to the school alone. Touya found Akira on the roof and told him to come with him, but Akira said he's too far-gone and attacked Touya, seeing Touya as nothing but an enemy. Before Akira could kill Touya, he was saved by Es. Es was unable to stand up to Akira's attacks and asked Touya to run away while she distracted Akira. When Es and Akira went to attack each other Touya jumped in the way of their attacks, saying he didn't want them to kill each other. Touya reminded Akira that he used to jump into Akira's fights like he just did and that Akira promised he wouldn't fight anymore, bringing Akira back to his senses. Akira then ripped the crystal out of his arm. After collapsing Akira apologized for breaking his promise before falling unconscious. He was then brought to Shin Yokozaki University Hospital. [8]

Ironically, because Akira's crystal progressed through the phases so quickly his crystal wasn't fully attached to his nervous system when he removed it, allowing him to miraculously survive, but he needed to go through serious rehabilitation. [9]

The next night, Yuki called Touya and gave the phone to Akira. Akira apologized for making Touya worry. Akira asked Touya if he was about to do something stupid but said Touya will be fine. [10]

One month after the Embryo Incident, Touya visited Akira in the hospital. Touya apologized for not visiting him more often but Akira said it was fine since he was busy helping Mei. Akira told Touya that he finally had found a goal to strive for; he wanted to be a doctor. Having been stuck in the hospital, Akira started looking up to Yuki after seeing her work and decided he wanted to be like her. Akira said it was silly but Touya found it amazing. Akira countered that Touya was the amazing one since he was doing something no one else could. Akira asked if Touya remembered when he went crazy and Akira revealed that he did remember. Akira remembered that Touya jumped into harm's way to protect him and he thanked Touya since he probably would have died had Touya not done that. Hinata came in, apologizing for being late since she had been talking to Yuki. Hinata accidentally revealed that she told Akira to try and cheer Touya up since he seemed depressed and that was the reason for the visit. Hinata and Akira told Touya he could talk to them about anything but Touya said it was something he had to solve on his own. He then received a phone call from Mei, so he said goodbye to the two.

One month later, Akira had started walking and was slowly getting better. Touya and Hinata met with him in the hospital's garden. Touya said he looked like he's doing great but Akira said he could barely move his hands and felt useless. Hinata said she brought Akira some pudding, saying that pudding was happiness. Akira asked if Hinata was going to feed him and she said of course. Akira said it's a bit embarrassing but Hinata had no idea why. [11]

A month after having ripped his crystal out, Akira was still in hospital. He was unable to get out of bed, and was treated by Yuki, who specialized in the treatment of Unions. As time progressed, Akira saw how hard she worked for her patients. It was at this point that Akira decided that he had enough of aimlessly wandering through life, and resolved to become a doctor like Yuki. He called Touya and Hinata, and told them both of his plan when they visited him in hospital.[12] On their next visit, Akira revealed to Hinata and Touya that he was going to be starting rehab so he could start walking again.[13] After his rehab, Akira began tutoring under Yuki and committed himself fully to his studies. 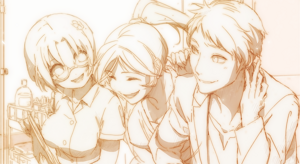 On his way to one of his tutoring sessions, Akira came across Touya, Hinata, and Es. Akira's altered memories prevented him from recognising Es, although she was able to remember in him some small part despite her amnesia. During his tutoring session with Yuki later that same day, he told her about Es and her appointment. The two of them interrupted it, and Akira was present when Es was offered a place to stay in the Himezuru residence. He listened as she told them all that she was having flashes of memories of them all together; Akira offered a theory that the memories she had of them were jumbled from her current interactions, but this led to Es having a rare outburst, stating that she was certain that they were real.[14]

Akira was invited to Es' welcoming party, which was hosted by Touya, Hinata, and Yuki. Mei, Kuon, and Elise were also invited. [15] Some days later, Akira was coerced by Yuki to carry her shopping, as well as the shopping of Hinata and Es. Although he complained that they had bought too much, he was grateful to spend more time with Hinata and spent the night at the Himezuru residence for dinner. [16] Es later went missing that night to follow Touya; Akira helped both Hinata and Yuki in finding her, but to no avail.[17] Touya and Es returned home eventually. In the coming weeks, Akira continued to be tutored by Yuki.[18]