Naoto Kurogane (ナオト＝クロガネ), also known as Naoto Terumi, is the servant of Raquel Alucard and heir to the Terumi branch of the Amanohokosaka Clan, signified by his ownership of the Eye of the Hunter. Naoto is the older brother of Saya Terumi and a cousin to Haruka Hayami. Naoto was sent from his possibility into that of the BlazBlue world to save his own world. 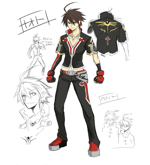 Naoto is a young man with pale skin, brown eyes, and eye-length messy brown hair with an ahoge poking up at the top of his hair. When using Bloodedge however, his hair turns white and his eyes turn red. This makes him resemble another Bloodedge, Ragna the Bloodedge.

In Bloodedge Experience, Naoto wears the uniform of his high school, Shin Kawahama First High School, that uniform being a black jacket with black jeans. However in Central Fiction, he wears a skintight black jacket with red and white cross emblems and short sleeves, black pants with a red belt, and red shoes with metal guards. He has a marking on his upper chest that resembles Ragna's, though this marking changes when he's in Bloodedge form.

Has a rough personality. Due to owning the special power of the "Eye of the Hunter," he has experienced many hardships, and he deeply wishes to lead an ordinary and peaceful life. However, because he has a strong sense of justice and can't help but assist those in trouble, he sometimes gets himself tangled in problems. He's not afraid of acting, but often does so before thinking. He's a little too loud for tea.[3]

A young man trying to lead a normal and peaceful life, Naoto has had harsh circumstances thrown his way, shaping him into the person he is now. Despite the tragedies in his life, such as having lost most of his family, Naoto never lets the trauma surface, and instead aims to live a normal life. Regardless, Naoto can never stop himself from helping those in trouble, even if it means disrupting his ordinary life. There are times when he doesn't think out his good-willed actions, diving headfirst into any kind of situation where he thinks he can help others.

He likes to avoid conflict and people, and preferred taking 30 minute walks to school instead of getting the bus since it would mean less interaction. He is not antisocial, but just dislikes crowds. There are times where Naoto can be socially awkward and not know what to do, but most of the time, it is because he has been thrown into a ridiculously abnormal situation.

Despite Saya Terumi having ruined his life, he still loves his younger sister and will protect her from anyone who would harm her. His cousin, Haruka Hayami, is another important factor in Naoto's life, but it is Raquel Alucard who has made the biggest impact. The young vampire often gets on Naoto's nerves and sometimes treats him as less than human, but the two are as close as they can be, sharing a tight bond. For any of these women, including his aunt Yuki Hayami, Naoto will go far out of his way and take on any odds for them.

In his spare time, Naoto likes watching cats and playing video games, including those in the visual novel genre.[4]

Naoto was taught by his mother in the way of her family's martial arts, excelling in them. As a member of the Amanohokosaka Clan, he is also versed in exorcism, but is nowhere near the level of the main family.

There are two powers that truly define Naoto - the Eye of the Hunter, and his Drive, Bloodedge. The Eye allows him to see the life-force of every living thing - be it human, Kaka, vampire, or otherwise. Having had the Eye for all his life, Naoto can read the runes that the values are presented in and can gauge the health and strength of others by reading them.

Bloodedge is Naoto's main weapon and he uses it frequently to fight his opponents. By using his own blood and hardening it, Naoto can create various weapons to fight his enemies. His arsenal usually includes a katana, a two-handed axe, a large scythe, and an extendable amount of blood that he uses in a fashion similar to a whip. Whenever Naoto uses his Drive, his hair turns white and his eyes turn red, but as of Central Fiction, this is only the case when he truly taps into his power to fight. He can create many shapes with his blood, even making a head similar to that of the Black Beast.

Because of his contract with Raquel, Naoto borders on the immortal, but only when she is around. They share the same life-force, and hers is far and beyond more than most humans. This gives Naoto an ability normally unique to vampires called Regeneration, which means that all wounds sustained will patch themselves up effortlessly. Because his right arm is made from vampire blood and thanks to the sorcery installed in it from Clavis, Naoto has the physical strength of a vampire - this was easily demonstrated when he killed an Apostle with a single blow. For an unknown reason, Naoto can subconsciously create fog from his body to replace missing limbs.

As strong as Naoto is, he still has weaknesses. Without Raquel, Naoto loses Regeneration and his right arm disintegrates back into blood. He is also a three-time amputee, and his replacement limbs have some movement restrictions. Naoto also has a lack of real fighting experience and relies heavily on his Drive to fight tough opponents, which can make him predictable.

An outsider who arrived from a parallel world to search for a girl called Raquel Alucard. He has the "Eye of the Hunter" that can see the strength of a person's lifeforce, and is the owner of the Drive "Bloodedge" that allows him to fight with weapons made from blood. Opening his eyes to the unfamiliar land of Kagutsuchi and disoriented enough to not know his right from his left, he asks around for "a blonde girl with pale skin, wearing black ribbons that look like rabbit ears.[5]

Has a rough personality. Due to owning the special power of the "Eye of the Hunter," he has experienced many hardships, and he deeply wishes to lead an ordinary and peaceful life. However, because he has a strong sense of justice and can't help but assist those in trouble, he sometimes gets himself tangled in problems. He's not afraid of acting, but often does so before thinking. He's a little too loud for tea.[6]

A foreign body that entered this world, searching for a woman named Raquel Alucard.

He possesses a unique power, 'Eye of the Hunter' that allows him to see the streams of life. His drive is 'Bloodedge,' which turns blood into a weapon.

When he wakes up in the unfamiliar land of Kagutsuchi, he is at a complete loss. Without knowing left or right, he wanders town looking for a 'blonde, pale young girl with ribbons that resemble rabbit ears.' [7]

The protagonist of the "Bloodedge Experience" official spinoff novels. A high school boy who uses the "Eye of the Hunter" and Bloodedge to fight.[1]

A stranger who appeared from another world. He possesses the "Eye of the Hunter," which lets him see others' life forces. Harboring a strong sense of justice, he can't leave those in trouble alone, and often gets himself into trouble.

He's an infighter who fights with a blade made of his own blood. He specializes in rushing while strengthening his skills with "Enhancer."[8]

A student that likes things like games and manga. He's the type that has a strong sense of justice and finds himself unthinkingly thrust into trouble over it.
But fundamentally, a peaceful and ordinary life is all he wants.[9]