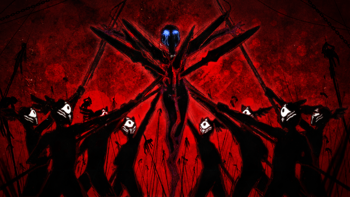 The suffering of The Origin

The Prime Field War was an event that occurred in the Age of Origin. The war was between the Prime Field Devices and humanity, and ultimately led to the creation of a new world governed by The Origin and the Amaterasu Unit.

The war began when humanity discovered the Susano'o Unit deep within the Boundary. They were then able to find the Amaterasu Unit. Humanity realized that they could control Amaterasu, and sought a way to access the Boundary. As the endless seithr within the space prevented them from entering, and the Amaterasu Unit only responded to an anthropomorphic shape, humanity created the Prime Fields. The Takamagahara System was also created to try and manage the Master Unit after it had been seized control of - Takamagahara also possessed the ability to rewind time, but was unable to create new realities. Humanity sought the Azure in order to complete the System.

The first of the Prime Fields, The Origin, came into contact with Amaterasu and became the first Eye of the Azure - an extremely powerful Observer with the ability to use Phenomenon Intervention to turn any possibility into a reality. Humanity did not anticipate that The Origin would have also developed a soul, and became frightened of what an artificial being could do with free-will and such power. The Origin was thrown back into the Boundary, and she contacted Amaterasu. 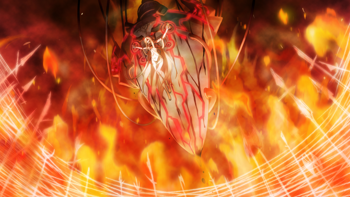 In the Boundary, The Origin saw how her sisters were treated by humanity - each of them being relentlessly experimented upon. She intervened, distraught over the treatment of herself and her sisters, and the Prime Field War began. Humanity had started the war out of fear and committed genocide of the Prime Fields, while the artificial humans only wished to be seen as individuals; they were forced to fight for their lives. The Prime Field Devices, although in much smaller numbers than humanity, had the advantage with their superior combat abilities and the power of The Origin providing backup from the Boundary. Under the suggestion of Clavis Alucard, humanity developed the Sealed Weapon Izayoi and its evolution, the Zero-Type Izayoi. Both were designed as anti-Observer weapons and were used to fight back against the Prime Fields.

Even with Izayoi, humanity was still losing the war. They finally resorted to creating the ultimate weapon - a Black Beast. It could not be controlled and devoured both humans and Prime Fields alike. Humanity only needed to win the war and obtain the Azure - with it, they could complete Takamagahara, reset time, and have the power to realize new possibilities. On the verge of humanity obtaining the Azure, The Origin intervened and begun to rebuild everything, yearning for a "human world". Takamagahara was forced to oblige to her command thanks to a miscalculation in the system.

Using an Embryo as a vessel and the Black Beast as a catalyst, The Origin rebuilt the world with Phenomenon Intervention, with the new world being based off information from the previous one. The war ended with only The Origin as the victor, presiding as a Goddess over her new world as she silently watched from the Boundary.

It is unknown what year the new world began in. Clavis, Takamagahara, and eventually the Black Beast were all reborn within it. The Sealed Weapon Izayoi also continued to exist. Some knowledge of the Prime Field War and the Age of Origin was somehow kept within the Magister's City of Ishana. Nine the Phantom stumbled across this information during the Dark War, but it seemed incomplete as there was no mention of The Origin. Nine relayed this story to the Six Heroes, but she only knew part of the story at the time.[1][2] At the end of the Dark War, Nine came to realize the truth of her world's creation, and began to create the Nox Nyctores - Corpus Sepulcro: Requiem to oppose and replace both Amaterasu and The Origin. She was thrown into the Boundary before she could realize her plan. Relius Clover had also come to realize the events that had transpired in the previous world.

Every time the world loomed towards December 31st, 2199, The Origin reset the world back 100 years prior. She did this as Ragna the Bloodedge, the Central Fiction, would die each time that date came. As the world was rebuilt with information from the previous world, there was only so far that the new one could go to. The world was similar to a dream in that it everything within it was made from previous information, and the world only had so many possibilities before they would be exhausted.

Susano'o later revealed that he had intended for his discovery so that he could be free from Amaterasu. Because of his actions, Susano'o, better known as Yuuki Terumi was the catalyst for the war to begin.[4]

Ragna eventually sacrificed himself to end the "dream" of The Origin. He created a new world using the wishes of the chosen, where endless possibilities were born.[5]

A war that happened long ago, in which mankind and Prime Field Devices fought against one another. As a result of this war, the world came to an end, once.

Nonetheless, following the war, the Master Unit reconstructed the world, which is the current world as we know it.[6]