Suzukaka was born to the Kaka, one of the first of her kind. They were made from the genes of Mitsuyoshi by an unknown country with the purpose of fighting the Black Beast. The Kaka left that country one day and formed a village with help from Mitsuyoshi's younger brother, Munefuyu. Suzu soon rose through her clan to become known as its strongest member and developed a strong relationship with her progenitor and her younger sister, Totokaka. 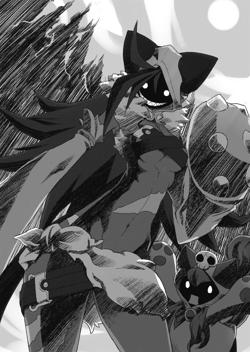 Both Suzukaka and Totokaka were in the Magister's City of Ishana in 2106, around five days after the first victory against the Black Beast. When they were there, they spotted Jubei running from the Orbis Librarius Norma and the Ten Sages with a group in his tow that consisted of: Trinity Glassfille, Nine, Yuuki Terumi, Hakumen, Valkenhayn R. Hellsing, Celica A. Mercury, and the Deus Machina: Nirvana. The two Kaka descended in front of the group and guided them to a secluded forest that was away from the pursuing force. There, Nine set up a teleportation spell, getting the entire group away from Ishana and towards another destination. [1]

The location that the group teleported to was caused by the mental image of both Suzukaka and Totokaka. As they gained their bearings after the teleportation, Suzu introduced both herself and Toto. Both Nine and Celica fell in love with their cat-like features and Jubei introduced the two Kaka as his daughters, causing Nine to misunderstand and incurring her wrath. Jubei continued to explain that the Kaka were bioweapons made from his genes, although Nine was unsure whether it would be alright to use the word “clone”. Suzu interrupted and said that “clone” was fine, and that the Kaka were enjoying life – despite the ethical implications of their creation, the Kaka were happy and did not worry about their origins.

Suzu made Jubei aware that Munefuyu had visited a short while earlier, and earnestly answered Celica's questions about who the Kaka were. Eventually, the group arrived at the Kaka Village. Suzu and Toto took Nine, Celica, and Trinity to the Kaka hot springs later that evening so they could relax. Although Suzu didn't understand the jokes they were making, she laughed at them anyway, content with her view and alcohol. She accidentally split her drink over Trinity which dirtied her glasses – it's implied that Suzu then became another victim of Trinity's infamous and seldom seen rage.[2]

The following day, both Suzu and Toto spent time with the heroes and Celica. They climbed boulders near the village before following Hakumen and Celica towards an old train station. The tracks lead into an old tunnel, which then lead into a cavern filled with glowing blue crystals. Celica began to glow with them, startling the Kaka. Another Kaka came running in, telling them that there was urgent news waiting for the group back in the village.

Suzukaka was present as the group learned that the Orbis Librarius Norma and Ten Sages were planning to use tens of thousands of people within a village in Asia to summon the Nox Nyctores Gigant: Take-Mikazuchi and fight the Black Beast. The group agreed to stop their plans, which were led by Seven and Eight. [3] The heroes, Celica, Suzu, and a group of Kaka were teleported to the village and Suzu worked to help evacuate the stragglers from what would be a certain demise. As the Black Beast and Take-Mikazuchi fought against one another, they were swallowed into a circle that lead back to Ishana. The result of them being forced into the same circle, an explosion of seithr billowed across the town. When Suzu awoke with the other heroes, Celica, and Eight, she was in Ishana. With them was the Black Beast itself, who retreated, seemingly overjoyed that it knew where Ishana finally was.[4]

Suzu was presumably among the Kaka who helped to rebuild Ishana after its center was crushed by Take-Mikazuchi's fall. She returned to the Kaka Village and, during the final battle against the Black Beast, lead the Kaka to fight against it. The Beast was killed in this conflict, finally ending the Dark War.[5] It is known that at some point between the Dark War and 2200 that Suzu passed away.[6]