Linhua (リンファ) is a minor character in the BlazBlue series. She's Litchi Faye-Ling's assistant in her clinic in the 13th Hierarchical City of Kagutsuchi's Orient Town. She was in the launch roster of BlazBlue Alternative: Dark War. 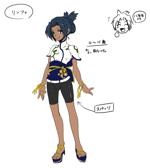 Linhua is a young human girl with tanned skin, navy eyes, and dark hair tied into a messy bun while her bangs frame her face. She wears a white, short-sleeved changshan with blue rims and a green vine print. Over this she wears a dark blue sash with a yellow petal print, and over this, yellow ropes that tie a navy butterfly ornament to her back. Linhua also wears two golden anklet, two golden bracelets on both wrists, black tights, and navy sandals with yellow straps. Her hair is held together with a comb, a memento from her mother.

Completely loyal to Litchi and her well-being, often going out of her way to make sure she's safe. Linhua is snide and witty, often making cheap shots at Bang Shishigami for her own amusement. Because of the damage they caused her family, Linhua despises the Novus Orbis Librarium, and is reluctant to medically help them, criticising many things about them, such as how they live at the top of the Hierarchical Cities, and their attitude towards civilians. When dealing with her patients, Linhua is no nonsense, taking a calm and serious manner.

Like Litchi, Linhua gets on well with the Kaka clan, especially Taokaka.

During the events of BlazBlue: Continuum Shift, Linhua demonstrated little fighting ability. She continually slammed her firsts into Iron Tager until she was bleeding. Otherwise, Linhua is a trained medic and was capable of running Litchi's clinic during her absence.

In BBDW, Linhua's physical power is radically different. She now fights using martial arts, moving quickly and rapidly with her many strikes. A small panda, nearly identical to Lao Jiu is perched on her shoulder - it is possible that, like Lao Jiu for Litchi, this panda gifts Linhua with more power to fight.

A young girl who lives in Orient Town. She has a candid personality and is optimistic in most situations

She lost both her parents while she was young, and was raised by foster parents. Currently, she is studying under Dr. Litchi, in hopes that one day she, too, will be able to become a doctor. Linhua makes her fair share of mistakes around the office, but is nonetheless a diligent worker.

Linhua favors comfortable clothes, and even keeps her hair short for the same reason: comfort. However, she's currently growing out her hair to be more like her favorite mentor, Litchi.

The comb that keeps her hair together is a memento from her mother. And, while she calls the Kaka clan 'savaged cats' she doesn't mean that in a negative way - if anything, cats and her get along quite nicely. [2]

A girl living in Orient Town, training to become a doctor. Litchi's assistant.[1]

A young girl who aspires to become a doctor herself while helping out at Litchi's clinic. She is cheerful, energetic, and can get along with everyone immediately.

However, sociable as she is, she often get scolded by Litchi for being overly up front with her words.[3]