The guardian of the Kaka Village, Tao was raised to be the new village guardian once Torakaka decided to leave. One evening, she was with Tora and met Ragna for the first time, calling him a "block-headed person" and ran away from him.

She forged a deep and loving trust with her clan and is well trusted to protect them despite the attacks made by Arakune. She is well acquainted with Litchi Faye-Ling, a doctor who frequents the village, and Jubei, the one who her genes are descended from. All the Kaka Kittens admire her, and see her as a role model.

A meeting was held by Totokaka to discuss the recent attacks made by Arakune and the general affairs going on in the village, such as a severe food shortage. Tao, however, was absent from this meeting that she was supposed to attend. Later on Toto found her wandering around the center of the village and asked that Tao do a favor for her in return for a year's supply of catnip. Her choice obvious, Tao agreed despite her earlier objections of it being too much work. The job in question was to look around the higher levels of Kagutsuchi which could help with returning sunlight to the starved areas of the village. [1]

A person (cat?) from the Kaka Clan that lives in the lower levels of Kagutsuchi. The selfish humans who came to their land afterwards installed a plate that blocked out the sky from the village. In order to regain the view of the sky, Taokaka leaves on a journey to gather lots of money and search for "Rawgnya".[2]

The kittens woke Tao up in the middle of one of her naps, giving her an assignment from the elder of the village to pursue Ragna the Bloodedge and claim the reward money from him. Directed to Orient Town, she found herself fighting Ragna out of desperation to be fed. When the battled ended, Ragna treated her to a meal at the local restaurant, but Tao was completely unable to recognize who he was since the wanted poster issued to her had such a terrible drawing of Ragna that even he was unable to recognize himself. Unfortunately, neither of the two had any money to pay for the meal so they fled as quickly as possible and were chased down by the restaurant staff, passing Linhua along the way.

The two ran into the Kaka Village, where both Tao and Ragna encountered the elder. She apologized to Ragna about being taken in by the guardian and offered up a secret passage into the higher levels of Kagutsuchi so he could evade those searching for him. Tao showed him the way, even though it cut directly through Arakune's den. At the end she stood down, opting to stay in the village instead of encountering the “evil squiggly." Both Litchi and Noel Vermillion entered the area and Tao immediately groped the lieutenant before ending up extremely disappointed with what little she found. Litchi and Tao went to the elder's house, but Tao had to sit and listen to the dark situation that was the Kaka's population problems, although her attention shifted as soon as Noel walked into the building.

Gigant: Take-Mikazuchi's blast had devastated the nearby mountainsides so Tao helped Litchi, Linhua, and the Ikaruga Ninjas in Orient Town by fetching medical supplies for the injured civilians. [3]

The descendent of a series of biological weapons created from the genes of Jubei, one of the Six Heroes who defeated the Black Beast. Although she was living happily in the Kaka Village in the lower levels of Kagutsuchi, she suddenly felt a yearning in her heart for excitement, and bounded away from the cheerful village.[4]

Back at the village, Tao was resting before being woken up, again, by the kittens for another mission from Toto: to broaden her horizons and become a warrior worthy of protecting the Kaka. Instead of going off, she went to go back to her napping where she found Ragna as he fell from the sky, so she took him down to the elder's shack after fighting off Arakune who had sensed the Azure. Inside the shack, she reunited with Torakaka and was told to find Litchi so that Ragna's wounds could be treated. On the way there, she ran into Relius Clover who observed her as being a remarkable copy of Jubei, even complimenting her spectacular senses. Since Litchi was away, she only found Bang Shishigami and Carl Clover inside the area, but they pointed her in the right direction where she eventually found the doctor and directed her to the village. When there, she played around with Ragna's wounds and went so far to test out his fighting ability after he healed up.

Tao travelled around some more before meeting Tsubaki Yayoi, who she took an instant liking to thanks to her knowing about her species. Upon mention of Ragna's name, Tsubaki came under the impression that the Kaka was working alongside the Grim Reaper and attacked, but, after the battle, she too was fondled by Tao, which earned her the new nickname “Average Lady.” Tao wandered off further into the Hanging Gardens where she found Hazama and Noel, and the former forced the latter to fight as a test of her life link. After the fight, Jubei jumped in to defend her from both Relius and Hazama, commanding that the Kaka follow Hazama to the top of the NOL branch where she fought him before suffering a brutal loss at his sheer strength. Jubei saved her again and carried her to the village where the hero told her to partner up with Ragna through his journey into the Ikaruga Federation.

Taokaka, the descendent of a series of biological weapons created from the genes of Jubei, one of the Six Heroes. As a warrior of the Kaka Clan, and for the sake of growing stronger, Taokaka joins Ragna on a journey to the region of Ikaruga. Once there, in order to help Ragna, she looks for Noel.[5]

Ragna and Taokaka had been travelling for over a month before they arrived at a location familiar to the Grim Reaper – the remains of the church where he was raised. He asked for some privacy but Tao misunderstood, thinking he was hiding food from her. She tackled him and licked him, claiming that he tasted like lies. He pushed her off of him, and she dramatically cried out about being bullied. Ragna left after promising to give her food, but Tao sensed something weird in another area and ran towards that direction. She entered the Old Kaka Village and met Torakaka, overjoyed to hear from her and learning that Momokaka was now the temporary guardian of the village until Tora or Tao's return. She felt something was off again, however, her instincts leading her back to Ragna, Rachel Alucard, Nago, and Gii as she caught onto the presence of Izanami . [6]

Ragna and Tao entered the 7th Hierarchical City of Kazamotsu, each blaming the other for taking so long to get there, but due to Taokaka's persistence they visited a local restaurant to eat. Halfway through the meal, they were interrupted by Bullet, her uniform leading Tao's uncontrollable mouth to call her out as “nyaughty." She watched as Bullet and Ragna gave one another intense stares, but left to find Noel when Ragna brought the subject up. [7] As it turned out, however, Tao hadn't left the restaurant, beating up the owner instead so she could find Ragna, but bumped into Celica A. Mercury. The two found Ragna severely injured. [8]

Tao joined Ragna, Celica, Rachel, Nago, Gii, Noel, Jin Kisaragi, Kokonoe, Kagura Mutsuki, Makoto Nanaya, and Hibiki Kohaku in a feast before the arena matches of the Battle of Ragna the Bloodedge. She chastised Ragna for eating so much, but gave him five popularity points. [9]

A warrior of the Kaka Clan, descendents of a series of biological weapons created from the genes of one of the Six Heroes, Jubei. While the Kaka Clan was living in the lower levels of Kagutsuchi, humans visited while restructuring Kagutsuchi and built a plate that blocked out the village's sky. In order to regain the village's view of the sky, Taokaka leaves on a journey to gather lots of money and search for the "Grim Reaper".[10]

As one of the chosen, Tao was sent into the Embryo and her memories were largely altered. She travelled to a distorted version of Roningai, meeting Bang, telling him that she would no longer be his apprentice, deciding to self-graduate. She told him she was going to hunt down Ragna, as she was unaware of their relationship with her memories now altered, and still believed him to be the notorious Grim Reaper with the incredible bounty on his head. [11]

In the alternate version of Orient Town, Tao found Ragna and tried to apprehend him before her empty stomach caught up to her. She begged him for food, so he gave in and treated her to a massive meal. By treating her, Tao decided that Ragna was a “good guy”, again, and ran out of the restaurant when Ragna realised he couldn't pay the bill she had amounted. [12] Presumably because of the distorted geography of the Embryo, Tao and Ragna ended up inside Roningai where they were ambushed by Carl. Tao was sent flying by Deus Machina: Nirvana. The following morning, she tracked Ragna by scent to Litchi's clinic, and offered to take him to the Kaka Village to shelter him from the NOL. [13]. She played with him in the village, and when an NOL soldier arrived to inspect the area, she told the Grim Reaper about the exit towards the sewers, although she recommended against it. [14]

Transported with the other chosen by Nine the Phantom to Ikaruga, Tao was told to kill Izanami in order to fulfil her dream by obtaining a piece of the Azure. She came across Tsubaki, and cheered her up before becoming carried away with herself and began fondling her. Afterwards, she told the soldier that she was fighting for her friends and justice, and left to go and find the “bad guys” [15]. She found Bang later on and helped him escape from both Nine and Nu-13. [16] Even deeper in the Embryo, Tao found, to her surprise, Tora. The older Kaka asked what Tao's dream was and she explained, leaving in very high spirits after Tora called her a “great Kaka warrior”. [17]

Iron Tager would later contact both Tao and Bang, asking them to assist Litchi in finally taking down Arakune, she agreed, finding her and then tracking down the monster with her superior sense of smell. She battled the monster but switched out with Litchi who was swallowed by it and then spat out. The Kaka woke her up and looked after her as Bang fought Arakune instead. During their fight, Tao and Litchi dissolved into seithr, their data backed up by Es. [18] 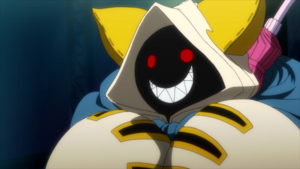 In the new world created by Ragna, Tao returned back to the village from her journey, being tackled by the kittens. She reunited with Tora, and was last seen with a huge grin on her face. [19]