Noel Vermillion (ノエル＝ヴァーミリオン) is a former Lieutenant of the Novus Orbis Librarium and one of the main characters of the BlazBlue series. She is a Boundary Interface Prime Field Device, a perfect reflection of The Origin's soul and the wielder of the Nox Nyctores' Arcus Diabolus: Bolverk and Lux Sanctus: Murakumo. A nervous, but kind-hearted young woman, she aims to help others wherever she goes.

Noel is one of the original twelve playable characters who debuted in BlazBlue: Calamity Trigger. She was revealed for BlazBlue Alternative: Dark War on February 14th, 2018. Noel's true form is Mu-12.

Noel is a petite girl with green eyes and blonde hair that falls to her upper back.

Noel wears her NOL uniform, which consists of a blue beret with a metal plate that she ties her hair into and a sleeveless blouse that reaches down over her thighs, and bares her shoulders and upper back in a V-shape. The sides of the blouse are blue while the front and back are white, and there is black lining around the seams. Two diamond-shaped silver pieces hang on the bottom of the blouse. She also wears a detached white collar with a red tie, and blue, detached sleeves that are a little longer over the shoulder, with black cuffs that hang over her hands. Yellow trim lines the sleeves' upper and lower hems, and they are held in place by a silver metal armband pushed up to her upper arm. Each armband has clipped to a ring on it, a red ribbon with a triangular metal tip. She wears white gloves with gold on the back, black, thigh-high socks, and blue, tucked-in, heeled boots with white lining. The boots have gold trimmings, a yellow cross on the anterior, and a silver metal tip on the toes.

After abandoning the NOL, Noel donned a new outfit. She let her hair down and now wears two blue clips in her hair. She wears a sleeveless, collared, white undershirt zipped at the back, and a short, red tie. The undershirt ends over her stomach, baring a bit of her skin. It also dips low at her back, mimicking the shape of her NOL uniform's shirt. Over the undershirt, she wears a short blue mantle with yellow lining. Red ribbons with triangular steel tips hang from the collar over her shoulders, pinned to the cloak with straps along the outside of her arms. She wears a thick black belt with a golden buckle and silver accents over a pleated, blue mini-skirt with a yellow hem. She holds her guns, Bolverk, in criss-crossed red holsters strapped behind her hips. She wears the same white gloves, blue, thigh-high socks, and style of heeled boots as in her NOL outfit, but the boots lack the cross motif and bear a large golden zipper in the front.

In the ending cutscene of Central Fiction, Noel is seen wearing a nun's outfit. She wears a white headband over a long, black habit. Her long-sleeved, black dress has a floor-length, bell-shaped skirt and a rounded, high collar. The sides of the black skirt are slit up to her upper thigh, letting a pleated, floor-length, dusky blue underskirt show through. She wears long, black socks and simple, laced, black high-heeled boots underneath.

Outwardly professional, Noel often feels lonely, and her fear of strangers makes it difficult to address that fear and establish new relationships. Although she is peerless in combat, outside of it she's often clumsy and awkward. Her cooking is especially abysmal.[2][3]

Noel is shy, reserved, and struggles to keep control over her emotions. She initially had great difficulty with socialising with other people, only being able to communicate because of Bolverk's ability to suppress emotions. In time, she eventually learned to interact with others, being polite, helpful, yet reserved. She is extremely close to Tsubaki Yayoi and Makoto Nanaya, and tries to get along with Jin Kisaragi despite the cruel way he treats her. She loves her adopted parents deeply, joining the NOL to save their name and often worrying about how they are.

She struggles with her identity as an artificial human, at one point calling herself a doll. These darker emotions caused her to hate the world, but they have since been quelled. As her soul is comprised of many identities, she focuses on the identity of Noel.

Because of how shy she is, Noel shops online and attempts to hide away from others. She can become easily flustered at the slightest of remarks, but does have nerve to fight forward and resolve to do what she believes is right. The former Lieutenant regularly writes poems, although she never shows them to anyone out of sheer embarrassment. Noel also has a weakness for things she deems cute or fluffy, such as Lao Jiu or Makoto's tail.

In addition, Noel is extremely sensitive to comments made about her small chest size. This often causes her to further withdraw into herself, although on occasion when others have mistaken her for a boy or a man because of her chest size, she can become angry to the point that she immediately attacks the offender with little warning.

Noel is a nimble solider who fights with the Nox Nyctores' Arcus Diabolus: Bolverk. Bolverk can assume the form of many firearms, it's main form being two pistols. When firing, it has the ability to shoot through space and preform armagus-based blasts, regardless of any walls and obstacles that stand in the way. Noel can change the strength of these shots with her willpower; she can make them weak enough to just knock small fruit around and strong enough to cause serious damage to an opponent.[4] Aside from being used for battle, Bolverk acts as a suppressor for Noel's negative emotions. Additionally, after Noel was smelted into a cauldron by the hands of Yuuki Terumi, Noel is able to assume her true form, Mu-12. She originally had no control over this form, as her emotions put her in a mundane state with only the desire to destroy. However, with the help of Rachel Alucard, Noel was able to master this form, and enter it with her emotions intact.

As she is the Successor of the Azure (蒼の継承者, Ao no Keishokusha), Noel wields the Power of the Eye (目の力, Me no Chikara). This allows her to observe others on extraordinary levels, as she did to Tsubaki to materialize the true form of the Zero-Type Izayoi.[5] The Successor of the Azure is the only one capable of locating the Master Unit in the depths of the Boundary. Furthermore, Noel is able to view the memories of another individual through touch, but she cannot do it by will.[6]

Noel's cooking is dangerous. The contents of her dishes usually puts the consumer in a highly fatal position, as they need to be hospitalized immediately after.[7] This is a trait shared by her "sisters". The Ars Magus aptitude test which was presided over by Estella McKenzie, stated that Noel had the highest aptitude ever recorded at the academy. Furthermore, Noel is gullible, and has very little control over her emotions, which leads to her being bullied or manipulated on occasions.

A lieutenant of the NOL, hailing from the remote and minor noble family of Vermillion. Excelling in battle and in Ars Magus, she is a direct subordinate of the young Major Jin Kisaragi. Although the two attended Military Academy together, her relationship with him is bad. Her current mission will change her fate significantly.[8]

An Ars Magus of the 4th Thaumaturgist Squadron with the position of lieutenant. She is the secretary of Jin Kisaragi. While preparing to return to headquarters after the previous incident, she learns that Jin has disappeared and goes to follow him not through fate, but by her own true will.[9]

Noel, a soldier of the NOL, was awakened as the Sword of the Godslayer: Kusanagi through Hazama's plan, and was rescued by Ragna. She then escaped to Ikaruga with the help of her friend Makoto Nanaya. After knowing that another close friend, Tsubaki Yayoi, has arrived in pursuit, Noel begins to move to save her.[10]

Excelling in battle and in Ars Magus, she is assigned to the 4th Thaumaturgist Squadron under the highest ranking official of the NOL, Colonel Kagura Mutsuki. She searches for the missing Captain Jin Kisaragi, and aims to capture the Grim Reaper. For the sake of her mission, she goes to Kagutsuchi with her colleagues.[11]

Outwardly professional, Noel often feels lonely, and her fear of strangers makes it difficult to address that fear and establish new relationships. Although she is peerless in combat, outside of it she's often clumsy and awkward. Her cooking is especially abysmal.[2][3]

The girl with the power to terminate the endless loop of this world.

Orphaned by the Ikaruga Civil War, she finds home in the lower class nobles, the Vermillion family. Her memories before becoming adopted, however, are all but gone.

She is quite shy, and is not great at finding new relationships. But, she cares deeply for her family that took her in, and the friends who surround her. She will fight, if it means saving them.

Her battle prowess is quite high, especially when it comes to Ars Magus. She enters the military academy with top scores. Her talents did not go unnoticed, and it wasn't long until she was assigned to Jin's unit. Tsubaki and Makoto are friends from her Military Academy days.

The very first mission she received was one to bring back her superior at NOL, Jin Kisaragi, who was accused of defecting. She heads for Kagutsuchi, where she inherits the true ‘Azure,' which will drastically change her fate.

While still chasing Jin, she falls victim to Hazama's scheme, and awakens as μ-No.12-. After being rescued by Ragna, she finds shelter in Sector Seven, but immediately sets off with Makoto to save their friend Tsubaki from the clutches of the Imperator.

With help from Rachel, Noel controls her power – the Power of the Azure.[12]

A girl with a battle prowess and magical ability that towers above the rest. She pretends to be collected, but is actually quite lonely. [13]

She wields the Nox Nyctores "Arcus Diabolus: Bolverk" and excels in battle, but is terribly clumsy at anything else; her cooking is lethal. She pretends to be collected, but is actually quite shy and is poor at cultivating interpersonal relationships.[1]

A soldier of the Novus Orbis Librarium with the rank of "Lieutenant." She is the secretary of Jin Kisaragi of the Fourth Thaumaturgist Squadron, although she possesses a high ability to do battle. Some wonder whether she chose to become Jin Kisaragi's secretary herself, since [he is] a known source of insight. However, she already possesses the extremely powerful "Nox Nyctores Causality Weapon - Arcus Diabolus: Bolverk.[14]

Noel in her Military Academy days. In the entrance exam, she achieved the highest level of Ars Magus aptitude ever recorded at the Academy. She has achieved excellent results in both literary and military arts, but on the other hand

Her cooking skills are so devastating that she can knock the light out of anyone with just one bite of her food.[15] 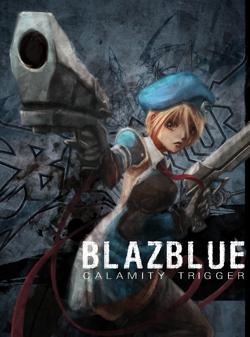 Prototype of the EU cover for BBCT. Artwork by radiantdreamer.