Nobody as created by the despair of Es. Es was in the possession of the Embryo, and created the World of Tsukuyomi to act as a buffer between the Boundary and the real world. However, Es witnessed the deaths of Touya Kagari, Mei Amanohokosaka, Kuon Glamred Stroheim, and Elise von Klagen. She consistently tried to interfere in these deaths, resetting time as much as possible. But without a variable factor, the result was always the same. As Es fell into despair, she cast aside her memories. The result was the birth of Nobody, who embodied the Embryo, and the transformation of the World of Tsukuyomi into the Phantom Field.

Nobody had a solitary existence within the Field. She was cursed never to leave as she embodied the Embryo, but the result of Es' despair and subsequent disappearance had wiped most of its power. Regardless, the threat was too great to the world's existence.

One day, Celica A. Mercury appeared in the Phantom Field. Nobody promised the child to help her find her sister. Upon the arrival of Konoe A. Mercury on the first floor of the Phantom Field, Nobody rushed to her, excited to finally make a new friend that she could share her riddles with. She gave Konoe a name to prevent further loss of her memories within the area and told her about Celica's safety. Although Konoe was reluctant, the two ventured together through the Field on Nobody's insistence. 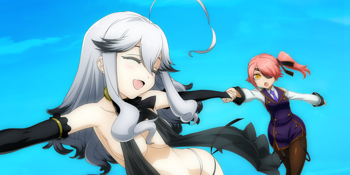 Near the entrance to the second floor, Nobody realized that Konoe would require Memory Fragments in order to proceed through the field. The two collected as many as they could, eventually diving down onto the second floor. As they arrived, Konoe's Origin of the Grimoire reacted with the collected Azure Memory Fragments; the two witnessed the memories, those being of Es. The memories detailed Es' creation by Souichiro Unomaru and the night she met Touya Kagari. Afterwards, both Nobody and Konoe vowed to continue to the next floor, although Nobody herself was smitten with the idea being able to shoot beams from her mouth like Goro Joizumi, a Drive-Union who was present in the memory.[1]

As they continued through the floor, Nobody pestered Konoe for personal information. Eventually, Konoe gave in and told her about her inability to use offensively oriented magic within the Phantom Field as well as her thoughts on Celica. The two made their way to the entrance of the third floor as Nobody continued to declare her fascination with shooting beams from the mouth. As they dove towards the third floor, the duo experienced more of Es' memories. This time they were about her meeting Kuon Glamred Stroheim, Yuki Himezuru, and Akira Kamewari. As the memories came to a close and they fell onto the third floor, Nobody found herself continually mesmerised with Es and pushed Konoe to help her find more and more fragments.[2]

On the third floor, Nobody asked about Konoe's social life. They admitted to one another that they don't have any friends, although in Nobody's case this was because of her solitude within the Phantom Field. After a while, Nobody announced that she would become Konoe's first friend. They made their way to the entrance of the fourth floor soon after. The next batch of memories they experienced concerned Es and her cruel treatment from Unomaru, as well the first time she ate pudding, met Elise von Klagen, the confrontation with Acht, the realization that Akira had become a Union, and the first time that Es had begun to experience heart ache over Touya. When Nobody learned Konoe was able to experience these emotions as they were happening in the memories, she tried to patch together an explanation, but this was unsuccessful. [3]

As they scoured the fourth floor, Nobody revealed that she has always been alone within the Phantom Field. She has no parents and had no friends until Konoe appeared. After collecting enough fragments, they continued to the entrance of the fifth floor and leapt to it. They experienced Es' memories once more, this time detailing her fights against Akira and later Ripper, as well as Touya's activation of the Origin of the Grimoire. The sequence ended and Nobody continued to insist her friendship upon Konoe, telling her that they would get through this together, just like Es had gotten through her struggles thanks to her own friends.[4]

Konoe opened up about left eye, and the pain she experiences from it as well as Celica's ability to nullify seithr. Nobody immediately expressed her concern, saying that she would never want either of them to go through any kind of hardship. Although her worry for Konoe deepened, they continued forward, collecting as many Memory Fragments as possible before diving down into the sixth floor. Nobody was reluctant at first, knowing the pain it would cause Konoe, but they continued anyway. In this batch of memories, they witnessed the battles against Drei and Acht, as well as the fight into the centre of the Restricted Ward. On the sixth floor, Nobody noticed that Konoe had changed, becoming more open about her emotions and remarking that she would get on well with Es.[5]

As they collected the Memory Fragments, Konoe revealed to Nobody that her father was a researcher on the Boundary and her mother a powerful mage. Nobody was unable to understand the resentment and hatred that Konoe felt towards her father, and eventually got herself so worked up about the subject and Konoe's stubbornness that she ran away. Eventually, Konoe found her again and the two reconciled as Nobody stated that the young mage was a special person to her as her first friend. With renewed vigor, they proceeded down to the entrance of the penultimate floor within the Phantom Field.

The next set of memories were about Es and her group's confrontation with the Es-N and Sechs. The memory ended after Es and Hinata were thrown into the Boundary; as it ended, Konoe expressed her concern for the two girls, believing that they had met their demise. Despite the grim prospects, Nobody was ecstatic as Konoe had finally managed to express concern for someone over than Celica. They continued down, collecting more Memory Fragments and promised to have a small celebration of pudding-eating once the ordeal was over. [6] 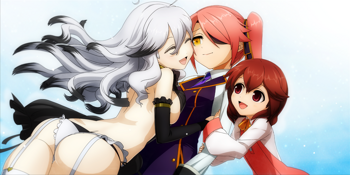 As they went through the floor, Konoe promised Nobody that she could come with her out of the Phantom Field and they could as much pudding as she could handle. As excited as she had ever been, Nobody agreed and they bounded through the floor, collecting all the fragments they could. As they approached the entrance to the final floor, Nobody knew that this might be one of the last times they see each other. She told Konoe that she was so happy that they became friends and warned her that the next memory would be the last one. As they dove into the Field, Nobody disappeared to find Celica. [7] When Konoe finally found them both, Nobody revealed that she lured her through the Field after having hatched a plan with Celica. The reunited trio made their way to the exit, where Nobody revealed that she was not going to be joining them in Ishana since she was bound to the Phantom Field. She interrupted the sisters protests, gifting them one final riddle: “Who am I?”. Moments after telling them, Nobody pushed them both through the exit.[8] 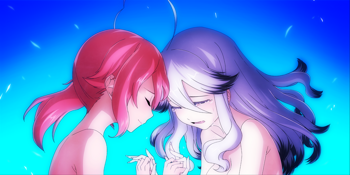 Nobody spent her time crying, mourning her companionship as she believed she would truly be alone forever. Konoe soon appeared, having entered the Phantom Field once more. She figured out that Nobody was once Es due to the Field's mechanics, but Nobody disappeared after telling her that while she was once Es, she was no longer her due to despair. In her place was a crystal that showed the source of the despair – the death of Touya, Mei, Kuon, and Elise. Konoe, however, was not phased, and explained to Nobody that she would save Es from despair. Using the seithr from all the crystallized memories, Konoe could lend Nobody the power to reactivate the Embryo. Using this, she would then create a vessel of a human girl in the likeness of Es and place it within the possibility she originated from. Konoe had already realised that she was from a different Possibility than Es, meaning it would pose no danger to her own world. The girl's braced themselves, and Konoe gave all the seithr she could to Nobody. It was not enough, but Konoe knew this and asked for the memories of Nobody. She refused at first, not wanting to lose any memories of Konoe or Celica, but Konoe insisted. Nobody relented, and by sacrificing her memories of her two only friends, she was able to regain the power of the Embryo. She transferred all of her memories and consciousness into the vessel of a young human girl in Shin Yokozaki City. [9]

The body of Nobody, and thus the Embryo, remained in the Phantom Field. It was sealed off by Konoe after she returned to her own Possibility. Years later, Konoe became known as Nine the Phantom, and made the Phantom Field accessible for her own gain. The Embryo was not seen there.