Bullet was brought up in a mercenary squad, the only girl among its all-male members. She considered them the only family she knew and grew attached to the captain of her squadron. At some point, a combat instructor known as Amane Nishiki was hired by the squadron's drill sergeant; compelled to join in with her family, Bullet participated in the training of three days and nights of solely Oriental dance. Amane soon left, realizing that he had mistaken the "troops" for a "troupe," and Bullet swore revenge, the music of that night permanently engraved into her memory. [1]

A mercenary who wanders battlefields across the world. A single scar marring her handsome face speaks of the severity of battle. Furthermore, five years ago her squad was annihilated during a military operation. In order to uncover the truth and take revenge, she takes a shot at infiltrating Ikaruga. [2]

Just outside of the Ikaruga Region, Bullet woke from a nightmare in cold sweat. She collected her thoughts and reminded herself that she would be in the region tomorrow morning.[3] She soon arrived at the 7th Hierarchical City of Kazamotsu where she accidentally bumped into Ragna the Bloodedge at a Chinese restaurant. Bullet recognized him from his wanted posters and asked what she should do if she theoretically came across the Grim Reaper, the most wanted man in the world. Taokaka, who was nearby, mocked her risque uniform, and Bullet punched Ragna, only making him call it “butt floss” in retaliation. He told her he could see all her assets and she threatened to not show any mercy the next time they would meet. She then left, extremely angry.[4] This exchange was undone by Phenomenon Intervention done by Izanami and the Takamagahara System.

Instead of bumping into Ragna and there being aggravation between the two, Bullet ran to his side as blood gushed out of him. He knew her name, having remembered it from the previous phase leaving her shocked. She let him leave the restaurant, not knowing what to do.[5]

Bullet joined as a participator of the Battle of Ragna the Bloodedge, winning her first victory in supposed style, being good enough that even Rachel Alucard had casually bet on her. As she entered the Colosseum for the final qualifiers, her opponent, Bob, was defeated by Azrael, who entered the arena. He told her that he killed most of her unit and she engaged him battle, but was defeated; the Mad Dog broke both her legs and one of her arms, taunting her again and again. She couldn't fight, Azrael was going to kill her, but Ragna jumped into the arena, handing Bullet to Celica A. Mercury, who took her back to the infirmary.[6] Bullet's weakness was because of Celica's presence, which restricted her use of Ars Magus. [7]

When Bullet arrived in Ikaruga she found Amane, recognizing him from years before. She did not believe he was the same person since his appearance was the same, and told him the story of the dancing instructor from years ago. At the end of it, Amane confessed he was the same person and Bullet promised that she would kill him. The battle, however, was a stalemate and Amane left after telling her to follow her instincts. Bullet then flipped a coin, taking his advice – it landed on heads, so she pursued Kokonoe with renewed vigor.[8]

Bullet was found by Azrael near the 8th Hierarchical City of Wadatsumi and he told her that he recognized her unit's emblem. Bullet attempted to fight, but was nearly bested, so used a grenade to cover her retreat. She hid in Yabiko from the Mad Dog, knowing that he would be unlikely to walk into the area's shopping district. Bullet saw Litchi Faye-Ling outside of restaurant's window and chased after her, demanding to know Kokonoe's location. Even though Litchi did not know the answer, Bullet still attacked, but the doctor escaped. Bullet was angry at herself for this, saying she was no better than Azrael.

When at Wadatsumi again, Bullet found Bang Shishigami, who had fallen deep into the underground area she was in. He initially mistook her for Litchi but she slapped some sense into him and the two decided to work together in order to find Relius. Bang told her that Relius likely instigated the Ikaruga Civil War, and that he was responsible for organizing the death of Tenjo Amanohokosaka. She attacked Bang when he kept talking about Litchi's figure.[9]

Both Bang and Bullet set up camp that night, although she was initially on guard for most of the time they spent together. Bang eventually made her laugh with a belly dance and the two talked about their past – they were kindred spirits – both were dedicated to a master who was no longer with them, and they promised each other that they help one another on their quests.[10]

Bang and Bullet went to Yabiko to continue their investigation, although Bullet's questionable methods of borderline interrogation were stopped by Bang, who wondered how she was not already in prison. They both saw Arakune, noting it to be extremely suspicious – they both gave chase, ending up in the Grave Marker of Bases. Relius was there, as was Litchi, Kagura, Makoto Nanaya, and Kokonoe. She listened to Relius and Kokonoe explain about the Ikaruga Civil War, and that her squadron was just a pawn in Relius' game. The mad scientist also revealed that he was going to create another Black Beast with Arakune as the foundation.[11]

A warrior who wandered around as an orphan of war before she was picked up and raised by a mercenary squad. That squad, with the exception of the caption Tager and Bullet herself, was annihilated. Since then, together with Tager, she has worked as a mercenary under Kokonoe's watch.[12]

Becoming one of the chosen, Bullet was absorbed into the Embryo, and came to believe that she had been a member of Sector Seven as her memories were altered. She was deployed by Kokonoe alongside Tager to the 13th Hierarchical City of Kagutsuchi to capture the Azure Grimoire. En route to Kagutsuchi's main hub, she came across Platinum the Trinity in Bascule but was unable to properly see her due to her fluctuating existence, and continued forward towards her objective. [13] She was found by Noel in Roningai, and was nearly arrested until Tager came to her aide – they both retreated. [14] She descended to the lower levels, admitting to herself that she had underestimated Noel, and coming into contact with Arakune and fighting him off [15]

Like all the other Entited, Bullet was transported to Ikaruga. Because of the seithr around where she was transported, it took her longer than she expected to get back into contact with Sector Seven. She eventually found Tager and, despite his warnings, went to pursue Arakune to bring him back to Kokonoe. [16] In a forest, Bullet's memories had failed to truly return to her, as she only saw flashes of her past. Azrael found her, but was disappointed in her being one of the last of the chosen to regain their memories. He ruthlessly beat her and left her and telling her about her past. Bullet resolved to find Tager, unsure if he was or wasn't the captain of her squad. [17] Ragna would soon appear and devour her dream. [18] 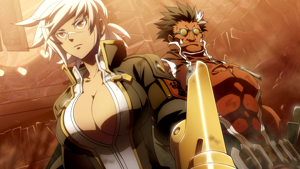 Finally putting her past behind her

Soon enough, Bullet's memories did return, and she called out for Tager to meet her in the Colosseum. There she challenged him over his memories, knowing that he had to be the captain that she had spent the last few years searching for, but Tager revealed to her that his memories had been sealed away and that he can't remember anything before coming into Kokonoe's service. Bullet challenged him, hoping that she could prove to her former captain that she is stronger than she was when she was a child – through her strength and resolve, Bullet won, and told him that she would striving down her own path, and would not be weighed down by her past. [19]

In the new world created by Ragna, Bullet returned to Sector Seven, being sent on a mission with Tager to Yabiko. [20]