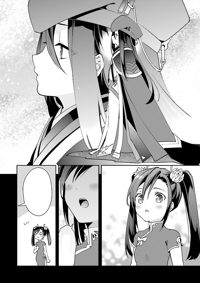 15 years before the end of the Ikaruga Civil War, the Lapislazuli family was a weak noble family. Meifang's father saw her as little more than a tool to help increase their families' social status. One day while meeting with nobles at the NOL headquarters, Meifang got sick of it and went outside. In the garden, Meifang saw Tenjo and called her beautiful. Tenjo, however, assumed she was talking about the garden. Tenjo asked Meifang to introduce herself and she did so, with Tenjo saying that Meifang had a good name. Suddenly, a young Kagura Mutsuki appeared and put a sword to Meifang's throat, demanding to know who she was. However, Tenjo punched Kagura in the head and told him he was being rude to her guest. Houichirou Hazuki then arrived and hit Kagura as well, dragging him away and apologizing to the Imperator. From then on, Meifang spoke with Tenjo in the garden every time she visited the NOL headquarters.

However, the year Meifang entered the Military Academy, the Ikaruga Civil War began. The last time Meifang met Tenjo, she told Meifang that the war happened because of her own weakness. After that Tenjo was moved to a safe place and Meifang was unable to see her.

After graduating from the Military Academy, Meifang joined the Ikaruga Civil War to try and end it, but then the destruction of Ibukido occurred. Meifang broke down, wanting to know why something like that happened if the Imperator didn't want conflict. Relius Clover arrived and asked Meifang why she was still alive and that she had an interesting soul. A broken Meifang replied that a devil would of course be in hell but she wouldn't hand over her soul. Ignis Clover tried to grab her, but Meifang said not to touch her since her body belonged to the Imperator, so Relius decided to observe her.

Later, Meifang led the Zeroth Squadron in an invasion of an NOL meeting discussing the destruction of Ibukido. Meifang saw a member of Sector Seven and asked why he was there, with one of the people saying he wished to defect. Someone else said the Zeroth Squadron didn't need to get involved so Meifang killed him and commanded her men to capture everyone.

While Meifang was alone, Hazama came in and was surprised that she was trying to stop the war. However, Meifang laughed at him, saying the war was already over and she was just cleaning up for the Imperator and that she would create a world without conflict. At some point, Meifang began to open up various facilities and commanded the Fuzzy line of vampires. 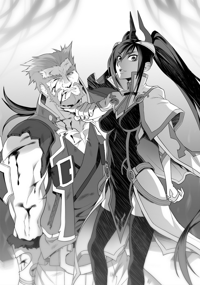 Just as the Ikaruga Civil War was about to end, Meifang had been tipped, presumably by Hazama, about the Ninth Squadron coming too close to discovering Kushinada's Lynchpin and their leader, Grimwood Huster, colluding with Sector Seven and Kokonoe. She found them and personally wiped out most of his squad, and held Grimwood by his neck in front of their newest recruit, Jin Kisaragi. Grimwood insulted her, and Meifang, without hesitation, decapitated him. She later knocked out Jin and then presumably ordered the torture of Karenjina Parsett.

Immediately following the conclusion of the civil war, Meifang began to take an interest in the Hazuki heir, Mai Natsume. She had tricked her into coming into a storage unit in which she declared that she wanted Mai's body; Meifang was preparing to assault her but her blow was blocked by Kagura Mutsuki. Not being deterred, Meifang defeated her fellow general, and chased after Mai who had met up with Kajun Faycott. To her surprise, Mai was now wielding the Legacy Weapon - Gallia Sphyras: Outseal. The two battled but Mai was teleported away by Kokonoe, the latter knowing that Mai would be unable to fight Meifang and live otherwise. [1]

Later on, Hazama paid Meifang a visit while she was bathing. She complimented him for giving her information on Mai and her No-Name Grimoire. He told her that he was interested in what she was transporting to the 13th Hierarchical City of Kagutsuchi, prompting her to exit the bath and ask him to get out of her way. More teasing from Hazama about her love for pain, yet inability to feel it, caused her kick him, but this made Yuuki Terumi appear and he began strangling her while telling her that he would cut her up and feed her to pigs - Meifang began laughing and lamenting on how it might hurt. Their encounter was cut short as an NOL officer entered the room and both Hazama and Terumi disappeared. Meifang ordered him to awaken the 16th Fuzzy and that information had been leaking. [2]

Meifang would be later seen in the outskirts of Kagutsuchi, investigating how the train carrying Bell had suddenly stopped and why she was missing. She inspected the snow, wondering if it was why communications were down, and began to ask the nearby NOL officers questions about what happened. One of them spoke about being presented papers that looked as if they were signed by the Imperator, but his tone annoyed Meifang and she executed him on the spot. She spoke down to the other officers, reminding them that speaking badly of the Imperator is treason and punishable by death. Fuzzy appeared and hugged Meifang and they used Ars Magus to share information. She left Fuzzy to deal with the officers as she had branded them traitors. Meifang began making her way to a facility that she believed Jubei would be infiltrating.[3]

Meifang would return to the outskirts, finding that Fuzzy was fighting Mai, Kajun, Ragna the Bloodedge, Taro Sasaga'e, and Shiori Kirihito. She blocked an attack from Mai, taking the blow of Outseal onto the palm of her hand, shocking Kajun who thought it impossible. Meifang explained that she used Ars Magus to stop it from piercing her skin, but it had still damaged her arm. After comforting Fuzzy, she turned to Ragna, being shocked that the Azure Grimoire would be present. The Zero Squadron had arrived and surrounded them all, and Meifang ordered that Bell, Ragna, and Mai be captured, and that the others should taste the "best Hell". Sadly for her, however, Rachel Alucard appeared and teleported the group away from Meifang and her squadron. [4]

Because of Fuzzy's failure to complete his mission, Meifang disposed of him and used the data he accumulated to overwrite the 17th and 18th unit of an unknown line. [5]

On an airship, Meifang received a report from Hazama that Mai was with the Hazuki family and Meifang said it was as she thought. She ordered her men to continue surveillance. She then said she knew Houichirou and Rin Hazuki would get in her way one day and started thinking about how to deal with them. [6] She soon awakened the other Fuzzy units, having them bring Bell to her at the cauldron at the 11th Hierarchical City of Shinatsu, who was followed by Mai. She gleefully stared at the captured girls. [7] She toyed with them, and revealed her goal to create another Gigant: Take-Mikazuchi using No-Name and Bell, briefly being contacted with Kokonoe and threatening to destroy Sector Seven the instant she would gain control of the Nox. Meifang and the Fuzzy were soon interrupted by Jin, who froze one of the vampires. [8] 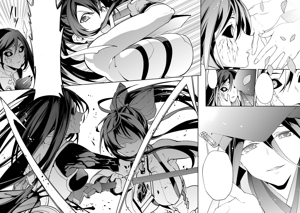 Meifang asked Jin if he had come to capture Mai, but he told her that he was instead sent to arrest the Colonel herself on grounds of treason. She did not take the threat lightly, and laughed at him for his personal motives, recalling the Ninth Squadron and how she dealt with them. The fight between herself and Jin reached a climax as Mai launched Outseal towards her, puncturing a large hold in her shoulder and allowing the Major to freeze parts of her. Having sustained a lot of damage, Meifang was losing her mental stability. [9] She commanded the Fuzzy to complete the plan to create a Nox. They broke down into the pieces of soul that they are, and Meifang was able to create a Phantom Field after being commanded by Terumi to hate everything. Inside her created Phantom Field, Meifang walked towards Mai, being surrounded by flames and corpses. She told her that she intended to make conflict extinct - to create a peaceful world that Tenjo would have wanted; her method being by force. Taro, Shiori, and Kajun were teleported to the field and Meifang battled against the four of them before finally being killed by Mai. Upon passing away, she saw a vision of Tenjo. As she died, Meifang began to realize that her true desire was to relive the days she spent with Tenjo, not to kill all who opposed her. [10]