The Mucro Algesco: Yukianesa () is the second Nox Nyctores and was made by Nine the Phantom. It was created for Seven and eventually found its way into the possession of Jin Kisaragi.

Yukianesa was created during the Dark War to combat the Black Beast, with its core being made from half of Gigant: Take-Mikazuchi's. It was created for and given to Seven, who used it in the final battle against the Beast.[1] When the war ended, Seven used the Nox to kill Eight, and the Nox disappeared from history as the world was to believe that she had stolen it, unaware of Seven's treachery.[2] Yukianesa would eventually find its way into the possession of Yuuki Terumi.

In 2193, Terumi lured Saya away from Celica A. Mercury's Church‎ and gave her Yukianesa, telling her to give it to her brother, Jin. He took the Nox and it began to mentally corrupt him, making him a slave to the sword. After using it to cut off Ragna the Bloodedge's arm, Jin was adopted into the Kisaragi family, marking the second time that Yukianesa was used by one of their members. Jin continued to use the Nox even though he was thoroughly corrupted by it, and in the Ikaruga Civil War, Jin used the blade to cut down Tenjo Amanohokosaka. [3] It would only be in the January of 2200 that Jin would finally master Yukianesa through the use of Order. [4] In the new world created by Ragna, Yukianesa still remains in Jin's possession, although he cannot use it since his body is incapable of fighting. [5] 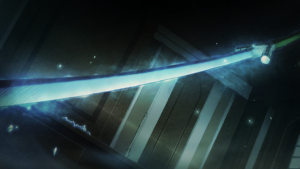 Physically, the Nox takes the form of a katana with a blue sheathe. The sword has a ceramic hilt, green metal handle, and a metal pommel. The blade itself is made of permafrost. [6] Jin personally uses the sword in an iaijustu style. Yukianesa's unique ability as a Nox is to take the water in the air, crystallize it, and create weapons out of it - it can also freeze the water in the air, being used in Jin's Arctic Dungeon technique. [7] Yukianesa can create huge icebergs with little effort that can take days to melt [8], swords and arrows of ice, and even ice in the shape of a lion's face; the ice created by Yukianesa erodes away at life. [9][10] Like other Nox's, like the Arcus Diabolus: Bolverk, Yukianesa can be summoned by its wielder to their location for convenience.

Wielding Yukianesa is extremely dangerous as the Nox has one of the most severe effects on its wielder's mentality. To its wielder it will constantly whisper "kill", tempting them to murder anyone close. There are also physical effects as Yukianesa's full power makes it too cold to normally wield - Jin is only capable of using it because he wears a thermal suit and specially made gloves. The blade can also stop its wielder from actually drawing it and using its ice-related abilities. [11]

The blade of this sword is formed from a special ice that never melts. It can crystallize the water in the air to use as weapons, or freeze its targets directly. The weapon itself has a will of its own, and Jin has been manipulated by the sword to drive him into murderous rages.[12]

Mucro is Latin for "sharp point", while Algesco means for something to become cold; the Japanese name uses 氷剣 hyōken, literally "ice sword." Yukianesa is one word for a yuki-onna, a yokai with dominion over ice - specifically, yukianesa means "snow sister." Thus Mucro Algesco: Yukianesa can be translated literally as "Sharp Point Becoming Cold: Snow Sister".