XBlaze Code: Embryo is a visual novel developed by Arc System Works and the first game of the XBlaze series.

The protagonist, Touya Kagari, is a resident of Shin Yokozaki City and a sophomore at the prestigious Hakuou North Academy. An earnest and responsible young man, Touya appears to be no more than your average high school student.

While returning from his part-time job, he heard a mysterious sound coming from the depths of the Restricted Ward, an area off-limits to unauthorized personnel due to a horrible disaster that happened there ten years ago...

His curiosity having gotten the best of him, Touya ventured ever deeper into the ruins of the ward, eventually coming across a man who appeared to be gravely injured. Concerned, Touya rushed to his side, asking if he was okay and if he needed any help.

But as Touya approached, the man suddenly stood up and attacked, screaming, "You're an enemy!"

And in the midst of invisible ringing bells, psychotic strangers, exploding walls of flame, and almost certain death, a small, cute girl with an enormous sword came charging in...

And despite her frilly, fragile appearance, her battle prowess was beyond reason or doubt. The name of Touya's savior was Es, a soldier belonging to the Mitsurugi Agency.

Yanked from the comfort of his everyday life, Touya was forced head-long into a world where the threat of death was everywhere and even allies could be his downfall...

The wheel of fate has begun to turn...

And the story of the Azure, and that of Touya Kagari and the mysterious girl Es, began.[1] 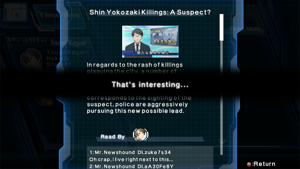 XBlaze's gameplay uses a unique system called TOi (Technology of Interest) to determine events and routes in the game. At certain points in the story, TOi articles will be made available to the player, containing usually short news articles or blog posts that give extra information about the world surrounding Touya. By selectively reading these articles, the player is able to choose different routes.

New TOi articles appear at set points in the story, and old ones will disappear after certain points in the story, whether they've been read or not. Some TOi articles will also trigger TOi Events after they've been read, unlocking special scenes that would have otherwise been skipped in the flow of the narrative. These scenes are indicated by an icon reading "TOi Event" in the top right corner. When returning to the TOi menu from such an article, the text "That's interesting..." will appear on the screen.

The TOi icon appears in the top right corner of the screen when there is new information in the form of either new TOi articles or an update to a character report. It also appears after the end of locked scenes to indicate that the user is able to access the TOi menu once again. In general, the user can only access TOi during non-battle scenes with Touya present.

After reading a TOi article once, in subsequent playthroughs, icons showing which other characters have read that article will be displayed on the article list, removing the need to read the article first to find out who has also read it.

Reviews for Code: Embryo are less than favorable across multiple sites. The kindest review comes from Gaming-Age, who gave it a Grade B, citing that the game has humor but its treatment of female members of the cast and the incredible amounts of text hold it back. [2] However, this is the best review that could be found. Pocket Gamer also criticised the wall of text that is the majority of the game, the TOi system, and the "cookie-cutter" characters, but praises the artwork, awarding it a 6/10. [3] GameCritics also found the TOi system as a large hindrance, as well as a "dull cast" of characters, ultimately giving Code: Embryo a 50/100. [4] Push Square also awarded the game 5/10, calling the TOi system too ambiguous and Touya too weak a protagonist, something that GameCritics had also noted. [5]

The most damning review of Code Embryo comes from US Gamer, which called the game "repellent". The review attacks the game, chief among its complaints are: a cliche cast; forgettable audio; lack of interface; and above all, the TOi system, which left the reviewer having to restart his game after achieving one of the bad endings. The review gave Code: Embryo 0.5/5 [6], and the game currently sits at a Metacritic score of 43. [7] Most of the reviews share a common dislike towards Touya as a protagonist, the cast of female characters, and the TOi system.