In Ishana, Acht approached Sechs and said she had just heard that he would finally put his plan into motion. Sechs said it would all begin the next day. Acht asked Sechs if he was sure about this since the guardian of the Kusanagi was Lord Stroheim and told him that if he wanted she could take care of it for him, but he said it wouldn't be a problem.

The next night, Sechs, Drei and Acht met to begin their plan. Drei told Sechs that only he embodied the attributes of a true Ten Sage, living honorably and using their power to lead other towards the truth, and he wanted to follow Sechs to see his plan come to fruition. Sechs said that it was pointless of Drei to ask for permission if he had already made up his mind. Drei apologized, knowing that Sechs hated wasting time and said he would follow Sechs of his own free will, promising to tear apart anyone who would stand in their way. Acht called him pathetic and Drei asked why she chose to follow Sechs, but she refused to answer. Drei said he would not accept if Acht did not take this seriously, but Acht replied that she was determined, revealing that she voluntarily became a Union. This proved her determination to Drei, who said he needed to rethink his opinion of Acht. Acht asked if he wanted to become a Union as well, but Drei said that since he wanted to see Sechs's world with his own eyes he couldn't afford to take risks so early on. Acht once again asked Sechs if he was sure and he said yes.

After stealing the Kusanagi, Sechs told Acht that his father was an unworthy vessel. Acht was shocked that Sechs used his Drive and Sechs said he used it because Lord Stroheim desired power. Drei arrived, telling them that preparations for their escape were complete and they would be heading to Shin Yokozaki City. [1]

Acht and Drei were present while Sechs watched the encounter between Akira Kamewari, Kuon Glamred Stroheim and Akio Osafune through a mysterious crystal. She offered to go and directly deal with the Grimoire but was rejected by Sechs. [2] 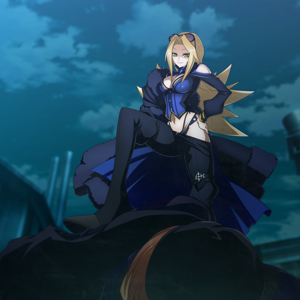 That night, she arrived at the Restricted Ward alongside Drei to collect Akio. She called Akio a “pet” and stepped on him multiple times, much to Touya's anger. Drei came over and picked up Akio, telling Acht she overdid it. Kuon demanded to know where Sechs was, but Acht merely said she hoped they could talk longer next time they meet. The two then departed. [3]

While having tea at a café, Acht was spotted by Touya, Es, Kuon and Elise von Klagen. Acht offered Kuon a seat so they could chat, but Kuon didn't want to speak with her so Acht asked her to leave. Elise told Acht that the rogue Ten Sages had been marked for death, and a bounty hunter had been hired to eliminate them. Acht wasn't concerned because she had no intention of ever returning to Ishana, activating her Drive and revealing that she was a Union. Kuon attacked her with Fire magic, damaging the café, but Acht was unaffected. She prepared to attack back with Ice magic but upon seeing Hinata Himezuru run towards Touya she stopped her attack, saying she had an interesting plan for the “release.” She then called over the waiter and told her to make Kuon pay for everything. She told Kuon to take responsibility for her actions or return to Ishana before leaving.

That night, she approached Akira, playing on his desire to get stronger to protect Hinata and convinced him to let her turn him into a Union. [4]

The next night, she went to the Himezuru residence and took Hinata hostage. When Touya ran in to get Hinata she attacked him with Ice magic, claiming she meant to miss. She said she hated how clueless and pathetic he was and prepared to kill him. Akira arrived and restrained Es, who was preparing to attack Hinata to get at Acht, with his Drive and Acht called him a “knight” that accepted power to protect the “princess.” Akira told her to leave Hinata alone so she departed. [5]

The evening, after Akira removed his crystal, Acht, Sechs and Drei approached Touya and Souichiro Unomaru, since Sechs wanted to talk to Touya. Acht said she had no more use for Akira but she'd gladly kill Touya if he wanted. Drei told her to stop since Touya was important and she sarcastically said she'd be a good girl. After Sechs told Touya to ask himself why he exists, he disappeared alongside Drei and Acht. [6]

The next night, Acht spoke with Sechs about Drei's death, although Sechs insisted that Drei did not actually die, he merely returned to seithr. Acht said she didn't have much time left and was starting to lose her sanity. Acht thanked Sechs for letting her be able to hold it together for that long, but Sechs said he only did what was necessary. Acht was just glad she was able to be of use to him. She claimed that she was never that skilled despite being one of the Ten Sages, but it was thanks to Sechs she was able to see the world outside of Ishana. Sechs asked if there was a meaning to this conversation so Acht decided to leave. Before leaving, Acht told Sechs she loved him under her breath. [7]

Later, she ambushed Touya, Es, Kuon, and Mei Amanohokosaka at the Wadatsumi Research Facility with Ice magic. Es deflected all of the attacks and Acht remarked that she hoped to kill at least one of them with that attack. Acht said she has no idea where Sechs was and was no longer involved with him; she just wanted to go crazy. Acht said that they must defeat her in order to go on. She told Touya to go away since she didn't want to deal with him, but then said she was just kidding and attempted to kill him. However, Es protected him. Acht called Touya pathetic for always having others protect him. She then attacked him again but was intercepted by Mei, who told Touya to go home and he ran off. As Kuon, Es and Mei discussed what to do with Touya, Acht attacked again, but got blocked by Kuon's Fire magic. Kuon told Es to go with Touya and leave Acht to her and Mei. Kuon then created a large explosion that blinded Acht, allowing Es to get past her. Mei thought Kuon was crazy, since they couldn't hurt Acht thanks to her Drive. Kuon planned to use the Sealed Spear: Izayoi, but Mei told her not to use it except as a last resort and that the two of them would defeat Acht together. Acht overwhelmed Kuon with her Ice magic, claiming she could teach Kuon a few things. Mei tried to attack with Lightning magic but got blocked as well. Kuon and Mei then both fired at Acht simultaneously, forcing her to activate her Drive to negate their attacks. 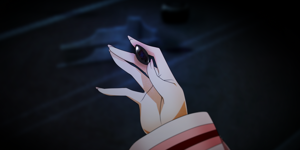 As a “prize” for forcing her to use her Drive, Acht told them more about the Embryo namely that it already existed in an incomplete state. Acht asked Mei how to destroy something like that and Mei suggested using the Origin of the Grimoire, but Acht said that answer was wrong. Acht then told her that they needed to first complete the Embryo and only the Grimoire could refine it. Kuon wondered if Sechs learned all that from the crystal, but Acht said story time was over and renewed her attack. Mei admitted they would be in trouble if Touya and Es decided to go on ahead of them so Kuon said she had no choice but to use the Izayoi. Mei respond that she couldn't afford to let Kuon use it and had a secret weapon, the Goofball Proximity Surveyor. Mei then attacked Acht again, but hid in the G.P.S. in the confusion, negating Acht's Drive and giving Kuon the opportunity to unleash her full power against Acht. However, it wasn't enough to put Acht down, but it did cause her crystal to progress a phase. Acht retaliated by launching a large iceberg at the two, which Kuon barely managed to destroy. At this point, Acht had reached phase six and devolved to the point where she screamed about how they were enemies who she had to kill, creating another giant iceberg. Kuon and Mei put all of their power into one combined spell, which pushed Acht's crystal over the edge. In her last moments, Acht asked if Sechs was there and tried to tell him she loved him before disappearing into seithr, leaving behind only her crystal.