The Origin was made by humanity after the discovery of the Susano'o Unit and the Boundary. She was designed to explore the Boundary and contact the Amaterasu Unit, becoming successful in her mission and even becoming the Eye of the Azure. Humanity, however, were afraid of her power and sealed her deep in the Boundary where she became Amaterasu's wielder. 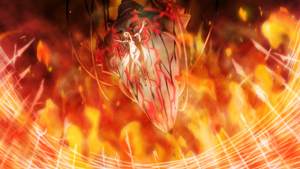 Seeing her sisters being tortured and experimented on by humanity, The Origin decided to help them in the Prime Field War, using her Phenomenon Intervention to make sure that each battle would turn in their favor. The war then became more bleak as humanity, in both their desperation to win and to obtain the Azure, created the Takamagahara System and a Black Beast.[1] The world was destroyed and The Origin began to rebuild it from memory, presiding over this new world as its Goddess. In the year 2100, she created the Looping World, resetting time back to 2100 whenever Ragna the Bloodedge died.

Saya, Ragna's sister, was born and somehow held a piece of The Origin's soul. Sector Seven, Relius Clover, and the Novus Orbis Librarium created three Boundary Interface Prime Field Devices, each one having some of The Origin's soul - Lambda-11, Mu-12, and Nu-13 were born from this. Mu had over half of The Origin's soul, which became known as Noel Vermillion. She was eventually turned into a Kusanagi that was supposed to kill The Origin by Hazama and Yuuki Terumi but the plan failed. As well as this, she broke the Looping World.[2][3]

Thanks to the efforts of Izanami, The Origin's own Drive, she was summoned into her world through the Nemesis Horizon, a cauldron in the sky. Though she resided within the Amaterasu Unit, Rachel Alucard protected her using the Tsukuyomi Unit, blocking an attack from the Gigant: Take-Mikazuchi.[4]

The Origin's world was destroyed once more by Doomsday and she resided within Amaterasu as the world fell apart. After the death of Susano'o, and both Izanami and Saya merging with Noel, The Origin was found by Ragna, Jin Kisaragi, Trinity Glassfille, and Noel. Ragna carried Noel into the Amaterasu Unit and the two merged, becoming whole.[5]