Carl was born to Relius and Ignis Clover in the 2nd Hierarchical City of Iwatsuchi. He grew up in their family household, becoming fond of playing chess and the violin, but most of all, playing with his older sister Ada. At some point, he was enrolled into the Novus Orbis Librarium's Military Academy.

In the short span when Carl attended the Military Academy but had yet to realise that Ada had been turned into a Nox Nyctores, he was invited over by Makoto Nanaya to have lunch with her group (Team Remix Heart) on one day. He was introduced to Mai Natsume, who he took an immediate shining to as she reminded him strongly of Ada herself. He struggled to keep track of the conversation regarding Mai's feelings towards Taro Sasaga'e, and wasn't seen in the manga for the rest of the series afterwards, presumably because he dropped out at some point to take care of Ada.

Escaping from the family household with Ada in tow, Carl arrived at his uncle and aunt's house 3 days later in the dead of night. Having woke up his uncle and aunt, Francis and Rosenne, they took him and Ada in. After Rosenne called Ada a 'doll', Carl had an explosive outburst, claiming that she was unchanged, and still family; he then began to explain what Relius had done to her and was driven to heart-felt tears. Rosenne stared at her niece, unable to imagine how someone so beautiful and bright had been turned into an expressionless doll, she then asked that the two do not stay in the same room when he slept as she was wary of his safety, with this, Carl's eyes pleaded with Francis to say otherwise. Eventually, Francis complied and allowed the two to stay together regardless. When the two went to bed, Ada tilted her head in an attempt to make a gesture; Carl eventually fell asleep studying the gesture.

A Vigilante belonging to the highest class. Although young, he has excels in both talent and skill. Alongside a mysterious doll named Nirvana, he eliminates criminals. After receiving information about the great criminal "Ragna the Bloodedge," he heads for Kagustuchi.[1]

Now an established vigilante, and hearing about Ragna the Bloodedge being the possessor of the Azure Grimoire, Carl travelled to the 13th Hierarchical City of Kagutsuchi in the hopes that the grimoire could somehow help return Ada back to her original state. Around midnight on the 30th of December, 2199, Carl was near the Kagutsuchi NOL branch with Nirvana before being greeted by Hakumen. The boy correctly deduced that he was the genuine member of the Six Heroes given his appearance and that he was wielding the Interfectum Malus: Ookami. Hakumen told Carl to abandon Nirvana and that its mental affects will be too much for him to burden. Angered that the hero was impeding his progress, Carl began to threaten him but was shocked when his sister stood between them both as Hakumen began to draw his sword. Before the fight could ensue, Nirvana grabbed Carl and leaped to a nearby rooftop to protect him, ever so aware of Hakumen's incredible power thanks to the time they spent together in the Dark War. [2]

Carl is only briefly seen when he was resting in the fields of Kagutsuchi, with Nirvana carefully watching him and keeping guard.

A boy who works as a bounty-hunting Vigilante. He pursues the "Azure Grimoire" in order to regain his true sister "Ada." He tracks its owner, Ragna the Bloodgedge while accompanied by the self-moving automaton and Causality Weapon "Nirvana."[3]

Stumbling around Kagutsuchi eventually lead Carl to Ragna by pure chance. Determined to take the Azure Grimoire for himself, Carl attacked but had a crippling loss, but Nirvana managed to deal a deep blow to Ragna. Carl was found by Bang Shishigami and was taken to Litchi Faye-Ling's clinic, but since Litchi was nowhere to be seen, Linhua saw to Carl's treatment. Noel served as Carl's target when he awoke as Nirvana's emotion amplification had twisted his mind into believing her as a genuine threat, when all she was attempting to do was help the young boy. Bang interrupted the unfair duel which sent Carl scampering away.

Once in the Hanging Gardens far away from Orient Town, Carl consumed a healing Ars Magus potion that he bought from a street shop vender. Soon afterwards, he came across Tsubaki Yayoi, and demanded that she tell her more about her his father, Relius Clover. Tsubaki refused, which lead to Carl violently attacking her, and eventually, even beating her. Before dealing a further blow, Makoto intervened, saving Tsubaki from Nirvana's crushing claws; seeing a perfect opportunity, Carl asked if Makoto, a member of the Intelligence Department, would help him in his search for Relius. Instead of handing over the information, Makoto picked up Tsubaki and fled.

Nirvana sensed Litchi in the NOL branch, and lead Carl to her. The doctor expressed immediate concern for the young man since the effects of the drug he took has a crippling after-effect on its users, and was developed for soldiers on the frontlines of the Ikaruga Civil War. He began an assault on Litchi but the drug forced him to stop, and not long afterwards, he began to weep in Litchi's arms as the reality of his life and Ada's condition finally hit him.

Relius enters the scene, forcing Carl to immediately strike him out of pure hatred – his father completely ignored him, instead marvelling at Nirvana and Ada's “cooperation” with the experiment to turn her into the doll. Carl and Nirvana reared back and began to attack, however, this was blocked by the Fluctus Redactum: Ignis. Before Relius could truly attack, Nirvana transported both Litchi and Carl out the area. Tears streamed down Carl's face as he screamed, having realised that the Ignis is his own mother, Ignis Clover.

A boy who works as a bounty-hunting Vigilante, accompanied by the self-moving automaton and Causality Weapon "Nirvana." He travels to Ikaruga in order to search for the owner of the Azure Grimoire, Ragna the Bloodedge, and Kokonoe, who knows about Casuality Weapons. That place — where Ignis was created.[4]

In Ikaruga, Carl discovered that both Ragna and Kokonoe were nearby, leading him to pursue them respectively for the Azure Grimoire and answers to his sister's condition.[5] Soon enough, he arrived in the 8th Hierarchical City of Wadatsumi, where he met Bang and Platinum the Trinity. Platinum made an inappropriate comment about Ada's condition, leading Carl's anger to explode in an attack towards Luna, and he rejected Bang's offer to show him the city. He left them both, explaining he was destined for the 6th Hierarchical City of Yabiko. On the way there, in the 7th Hierarchical City of Kazamotsu, Celica A. Mercury happened upon him and repeatedly called out to Nirvana. Irritated, he attempted to battle her but was interrupted by Hakumen; he lost to the hero and continued onward to search for Relius.[6]

Following Nirvana's guidance, Carl found himself face-to-face with Relius and Ignis. They talked about Litchi and her decision to join the NOL, and finding himself so enraged with Relius' personality, Carl attacked as soon as possible, but was unable to even scratch the man. Relius left after promising that he would rebuild Ada, should the time come. After leaving the area, Amane Nishiki brashly approached him and begged him to join his traveling troupe. Carl gave him little chance and left as soon as the opportunity arose, in no joking mood after his meeting with his father.[7]

Near Kushinada's Lynchpin, Carl deflected a blow from Ragna that had been directed towards Relius. Litchi and Bang begged him to not join the fray, but he ignored them in pursuit of Ada's cure. Nirvana and Ignis' tag-team prevented the opposition from advancing, but the two were soon split up with Carl taking up arms against Izayoi.[8] After losing, Carl protected Relius and evacuated them, insistent on him fulfilling his promise to save Ada from her mechanical condition. Litchi aided him in taking his father out of the area.[9]

In the 7th Hierarchical City of Kazamotsu, Carl was found by Celica A. Mercury, who repeatedly called out to Nirvana. Irritated, he attempted to battle her, but was interrupted by Hakumen; he lost to the hero and continued on to search for Relius.[10]

A young Vigilante, who nonetheless excels in both talent and skill. Controlling a mysterious doll named Nirvana, he eliminates criminals. In order to cure his sister's illness, he sets his eyes on the "Grim Reaper" who possesses the "Azure Grimoire."[11] 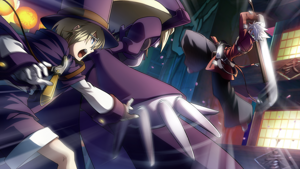 Fighting for the Azure Grimoire

Both Carl and Nirvana were taken inside the Embryo, and the former had his memories altered so that he didn't believe that Ada was inside Nirvana, and that she was instead bedridden at the Clover family home. [12] In an alternate Roningai, Carl found Ragna and Tao, whose memories had also been changed. He knocked Tao flying with Nirvana, and demanded the Azure Grimoire. He lost the fight against the Grim Reaper, being forced to retreat, but not before causing a serious wound with Nirvana. [13]

The following day, Carl began wandering around Kagutsuchi and met Nine the Phantom who mocked him for being ordinary compared to his father. She told him that Relius was partially responsible for bringing the Dark War open the world, feeling he had a right to know as their fathers had both worked together. [14] He was later transported to Ikaruga and by Nine and told to kill Izanami in order to secure his piece of the Azure [15]

In the 6th Hierarchical City of Yabiko, Carl was found by Celica, whose memories were unaffected. She told him about Ada being inside Nirvana, a truth he did not want to accept, even after Nirvana refused his order to assault her former mistress. Memories began to flood back to him, and he ran away from the mage. [16]

It would not be long until Carl's memories had truly returned. He apologised to his sister for having forgotten about her and pondered on what actions he could take, eventually settling on pursuing Relius in the search for more knowledge in the hopes that he could cure Ada without killing Noel. [17] Carl found papers dating from 2098 with Shuichiro Ayatsuki and Relius' names printed on them. He came to the realisation that his father had travelled through time using the Boundary.[18] He found Jin and Trinity Glassfille preparing to modify Platinum the Trinity's body so they could exist within the Embryo, and he offered his assistance to gather experience. [19] In time, he found his father, and asked to be taught all of his knowledge, to which he complied. He learnt of the Prime Field War, believing that the humans who started it were selfish. [20] Confronted with this new knowledge, Carl initially rejected it before realising that Relius had seen this with his own eyes. [21] 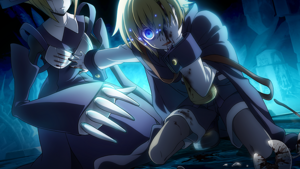 Carl sees “the world” at a cost

Carl looked into the Kagutsuchi cauldron, forcing Ada to let go of his hand in order to do so. He was nearly swallowed into the Boundary until his sister saved him. By peering into the Boundary, he had been given an eye similar to Relius, and he had seen the form of the world. [22] Soon, Carl evaporated into seithr, and was reborn in the new world created by Ragna. There, he was seen with a mask over his changed eye, and he wandered around the world with his sister. [23]