I, Spinner Superior, have prepared the highest quality bug for her sake... Raquel Alucard![1] 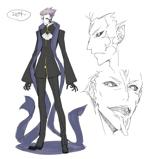 Spinner is a tall, gaunt man with unhealthily pale skin. His pupils are as white as his skin and his sclera is pure black; his ash hair is spiked upwards. Spinner's forehead is tattooed with a black insignia, and there exists another one on his tongue; on the left side of his face are marks hinting at corruption and both of his ears are pierced with several studs.

The mage's sense of style is unique - he wears a formal black suit with a white cravat, of which is attached with a black and red emblem. The suit itself has a golden trim, and he wears a simple belt. Spinner's look is completed with simple black shoes, black gloves, and a large purple scarf that reaches down to his feet.

Spinner is unusual with a hard to describe personality. He lusts after the Azure and Raquel Alucard, romanticising the both of them. Although he will act like a gentleman to Raquel, he is anything but, and will throw insults towards others, not being afraid of saying the cruellest thing he can to them. As well as this, his behavior towards Raquel when he is not around her is derogatory and vaguely sexual, expressing an intense desire to experience her with all of his senses.

This mage is dark and twisted. Spinner believes his powers to be far above that of others, expressing a confidence that could be described as hubris.

Described as an exemplary mage, Spinner is gifted with sorcery. He can effortlessly take on and defeat numerous members of Sleipnir, the Mitsurugi Agency's personal army. In combat, his main method of attack is with dark sorcery that can swallow individuals and chew them until nothing remains. This darkness is tangible, and can be cut down with certain methods; it functions similar to a liquid.

Spinner can heal most wounds, with insects appearing whenever a wound stitches itself together. Spinner's insects are a large part of his identity, as he uses them to track and spy on others, as well create Apostles, various men directly under his control. There are numerous bugs he has under his control, with one of them being designed to take on Clavis - this alone is a testament to the skill that Spinner possesses.

An excellent Mage hailing from the Magister's City Ishana, and a bug-user rumored to be the closest to the Azure.[1]