The game combines four franchises: Arc System Works' BlazBlue, Atlus' Persona 4 Arena and its sequel, French Bread's Under Night In-Birth, and Rooster Teeth's RWBY. A fifth franchise, teased at Evo 2018 as a pink square,[6] was revealed to be Team Arcana's Arcana Heart (formerly co-owned by Examu as of the end of February 2020) at Evo Japan 2019. A sixth franchise, represented by a light blue square, was also teased at Evo Japan 2019,[7] which was later revealed at Evo 2019 to be Marvelous Entertainment's Senran Kagura. A seventh franchise, represented by a grey or brown square, was announced and revealed to be Subtle Style's Akatsuki Blitzkampf at the same event.

The fighters take a risk in order to return to their own world, and throw themselves into the battle to steal each other's "Keystone"—.[15]

At the time of the game's announcement, the "expected" or obvious characters had already been decided for the roster. The game was announced relatively early in its development cycle due to the developers wanting to hear the players' requests for characters.[21] Overall, characters were chosen with the game balance and game system in mind first and foremost, so that a wide variety of players would be able to play and enjoy the game. The characters from other (non-BlazBlue) franchises were chosen by sending a list of characters over to their companies. The list would be whittled down there, and sometimes they would make a request for a specific character to be included.[22] 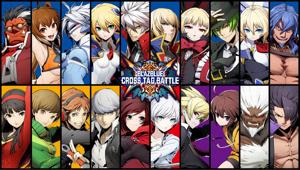 On Feb 6, 2018 it was announced that Cross Tag Battle would be the fourth game present at the Evolution Championship Series 2018 (Evo 2018). Along with a broadcast of a fully English-subtitled version of the ASW FGA trailer, it was revealed that Blake and Yang would be provided as free DLC.[25]

On Feb 7, 2018 the first English-language Arc System Works Official Livestream, ARC Live!, was announced on Twitter[26] and streamed on Twitch at 4 pm PST. Mirroring the Japanese-language version of the livestream, various Arc System Works titles are showcased during the live with gameplay, including Cross Tag Battle. It was mentioned on stream that the series would be streamed weekly. During the first ARC Live!, an ASW staffer reconfirmed that Blake and Yang would be free DLC, that the four RWBY characters would have both English and Japanese voices, and clarified that Blake would be available at launch, while Yang would be available shortly after launch.[27]

At a press release in mid February 2018, attended by BlazBlue producer Mori Toshimichi and Arc System Works CEO Kidooka, it was announced that Cross Tag Battle would support dual audio with full English and Japanese voices.[28]

A playable build was first exhibited in October 2017 at four events worldwide: New York Comic Con (NYCC) in New York (Oct 5-8), South East Asia Major @ GameStart 2017 in Singapore (Oct 14-15), RTX London in London (Oct 14-15), and Arc Revolution Cup 2017 (Arc Revo) at Toushinsai in Tokyo (Oct 21).[29] Arc Revo's playable demo featured an updated build referred to as the "Toushinsai build" in the gameplay manual, which included the third introduction trailer's characters as playable except for Weiss.[30] Following these events, Arc System Works put out a survey on BlazBlue: Cross Tag Battle's official website in both English and Japanese requesting feedback from participants of any of the four events. It was available until Nov 8, 2017 at 8 am PST. [31]

In this first build in October 2017 at Toushinsai, Reject Guard used only half a skill gauge and Distortion Duo only used one skill gauge. Resonance Blaze had a maximum of four levels, and the amount of time spent in Resonance Blaze was extended depending on its level. One round lasted only 120 seconds, and players started with all three out of three skill gauges. The initial roster consisted of Ragna the Bloodedge, Jin Kisaragi, Yu Narukami, Yosuke Hanamura, Hyde, Linne, and Ruby Rose. Hazama, Rachel Alucard, and Weiss Schnee were added to the roster in the Toushinsai build. [32]

During ASW FGA, it was announced that Arc System Works would appear at the 2018 Japanese Evolution Championship Series (Evo Japan) with a new demo featuring twenty playable characters (the twenty non-DLC characters).[33] It was announced at a later date that Arc System Works would also be appearing at Taipei Game Show 2018 (TaGS, TGS) along with a playable demo of Cross Tag Battle. This second playable build of Cross Tag Battle was presented simultaneously at Evo Japan (Jan 26-28, 2018) and Taipei Game Show (Jan 26-29, 2018).

In January 2018's build, Reject Guard and Distortion Duo had their costs changed to use 1 skill gauge and 2 skill gauges respectively, Resonance Blaze's max level was increased to five, and the amount of time spend in Resonance Blaze was changed to fifteen seconds excluding hitstun regardless of level. One round's length was increased to 180 seconds, and players started the round with only one skill gauge available out of a maximum of six. Additionally, this build added stage names to the pre-battle cutscene, as well as the Crash Assault "Crash!" indicator. [34] The roster was increased to twenty, adding in Noel Vermillion, Azrael, Iron Tager, Makoto Nanaya, Nu-13, Es, Chie Satonaka, Yukiko Amagi, Waldstein, and Gordeau.

On March 8, 2018, Arc System Works America revealed that Cross Tag Battle would be playable at Anime Ascension at Irvine, California (Mar 31-Apr 1), and Anime Boston at Boston, Massachusetts (Mar 30-Apr 1).[35] A week after, it was also revealed to be at Sakura-Con in Seattle, Washington (Mar 30-Apr 1). These three conventions were the first to have available a playable build of Cross Tag Battle featuring the English dub.[36] The English dub would also continue on to be featured in the ARC Live!s following these three events.[37] They were followed by Sakura Fight Festa in London (Apr 7-8), the Brussels Challenge in Brussels (Apr 7-8),[38] and Next Level Battle Circuit in New York City (Apr 11)[39].

From Apr 8 to May 19, Cross Tag Battle playable demos were featured in various stores across Japan, alongside demos of Persona 3 Dancing Moon Night and Persona 5 Dancing Star Night.[40]. Demos were also made available in various GameStops across North America the week after April 11[41], and users were encouraged to provide feedback through the hashtag #BBTAGdemo.[42]

BBTAG released a free trial on Steam for the duration of Evo 2018's weekend, allowing players to try out any of the twenty base characters in the roster.[43] After Evo 2018, the DLC characters for Character Packs 4, 5, and 6 were revealed and made available to demo at Evo's Bar Fights afterparty.[44]

The news of Version 1.5 and BBTAG in arcades was announced at JAEPO 2019, and arcade location tests for version 1.5 were held at Akihabara Hey in Tokyo, Taito Station Phoedra Osu, and Taito Station Osaka Nipponbashi on February 9 - 10, 2019.[45]

Console demos of Version 1.5 including the English dub were available at the Game Developer's Conference 2019 (GDC 2019) in San Francisco between March 18 to 22[46] and at SoCal Climax in Long Beach, California on March 22[47].

Hosted by Arc System Works America, the North American demo covers the beta and demo available to Canada, Mexico, and the USA for the PS4 and Switch.[48]

Hosted by PQube Games, the European demo covers the beta and demo available to Europe for the PS4. They did not host a demo or beta for the Switch.[49][4]

Hosted by Arc System Works, the Japanese demo covers the beta and demo available to Japan for the PS4 and Switch.[50]

On March 2, 2018, the BlazBlue official twitter announced a special campaign called the My Tag Cheer Campaign (推しタッグ応援キャンペーン Oshi Taggu Ōen Kyanpēn)[51]. During this campaign, fans could tweet with the hashtag #BBMyTag to express their favorite tag-team in BlazBlue: Cross Tag Battle. Tweets in the hashtag containing original art would be retweeted by BlazBlue's official account, and fans could like or retweet others' tweets to show support. Especially popular tag teams would have a gameplay video made for them. Additionally, players who participated in the hashtag were automatically entered into a drawing for a specially-illustrated tapestry drawn by HIGUCHI Konomi, the main designer for Cross Tag Battle.[52] It was later clarified that only participants living in Japan could be sent the prize, although participation itself was open to everyone.[53] The event closed on May 31, 2018.