Saya's Drive is not her only strength, however, as she is an incredible swordswoman who wields her katana with deadly proficiency. Her strikes are fast, deliberate, and powerful, being able to land blows on both Raquel and Valkenhayn. Physically, she's strong enough to lift Naoto in the air by his throat. As a member of the Amanohokosaka Clan, she is also versed in exorcism, but is nowhere near the level of the main family. An interesting exorcist technique that Saya can employ is to vastly improve her speed and strength, allowing her to outpace and nearly defeat Valkenhayn. There is only one drawback, and that the technique will greatly tire her after three minutes. Saya is also hindered by her naturally frail body, meaning she needs to use Soul Eater regularly to keep up her strength. 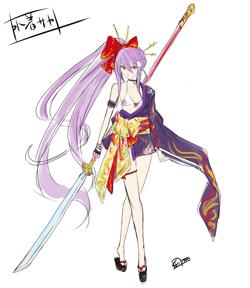