A researcher of magic with a body containing countless insects. Currently living in the sewers beneath Kagutsuchi. In order to maintain its existence it requires a large amount of vitality, which it obtains through attacking humans and Kaka. One day, it senses a disproportionally large energy source and begins to move.[1]

Having run away from Sector Seven, Arakune found himself within the 13th Hierarchical City of Kagutsuchi, becoming a monster lurking within its sewers. The Novus Orbis Librarium issued a bounty on him, and the monster fed on the kittens of the Kaka in Lost Town, having constant scraps with Taokaka, the clan's guardian.

In the late December of 2199, Arakune was found by Ragna the Bloodedge. The monster sensed the Azure on the man and attacked him, but were interrupted by Litchi, who had become a doctor within the Hierarchical City to protect others from Arakune and to save Roy. Arakune lay on the ground while Ragna and Litchi talked about him before finally escaping. [2]

It was originally a researcher of Sector Seven, who opened a forbidden door in his zealous search for the truth. It transformed him into an amorphous creature that housed countless insects within its body. It wanders while searching for a "strong life force" that will sustain its existence.[3]

A researcher of Sector Seven. For the sake of surpassing Kokonoe, he touched the Boundary; as a result, he lost his memories and was transformed into an amorphous creature that sought only the Azure. After that, the creature was captured by Relius Clover and modified into a puppet.[4]

Arakune followed Relius around in Ikaruga before being ordered to infiltrate the NOL branch in the 6th Hierarchical City of Yabiko.[5] When he did, he found Noel, who had subconsciously entered the Realm. Arakune assaulted her, but Ragna and Kagura Mutsuki broke down the door and Arakune was forced to fight the Black Knight. He lost and retreated, returning back to Relius, telling him about Noel and Ragna being in the Yabiko branch before being ordered to return to Hazama.[6]

After Relius captured him in Kagutsuchi, Arakune was locked away in a laboratory where he was implemented with an Artificial Causality Phenomenon Weapon. Litchi also worked in this lab and would visit him when she had the time. Before long, Relius sent Arakune to the Ikaruga Region.[7] He was then ordered to attack Bang and Bullet, luring them back to the Grave Marker of Bases. Relius planned to use Arakune as the base for a new Black Beast.[8]

A researcher of magic with a body containing countless insects. Currently living in the sewers beneath Kagutsuchi. In order to maintain its existence, it requires a large amount of vitality, which it obtains through attacking humans and Kaka. Claiming itself as the "Azure Grimoire," he (?) senses the Azure and moves.[9]

Transferred into the Embryo, Arakune strangely became one of the chosen. In the Kaka Village, he found Bullet and fought her until she managed to fend him off. [10] He later lurked in the sewers of Area 28 until he sensed a piece of the Azure and came across Ragna, whom he assaulted. However, Arakune then sensed Noel, who holds a piece of the true Azure, and stopped in order to hunt down the young woman instead. He attempted to devour her but was stopped by Ragna and was nearly killed by him before Litchi came to his rescue, allowing him some time to flee. [11]

He ran deeper into the sewers before being chased down by Litchi. When he smelled the scent of the Azure on her, he attacked. However, almost immediately he realized it would overpower him, knowing that the power of the Boundary that she channeled would consume him, and he stopped his attack and fled. [12] Like the other chosen, Arakune was transported to Ikaruga by Nine the Phantom who told him to kill Izanami to claim his piece of the Azure. Before hunting down Izanami, however, he was discovered by his former colleague Tager, whom he assaulted and forced to retreat. [13] He found Nu-13 much deeper in Ikaruga and attempted to attack her, but was repelled by Relius Clover, so he fled. [14] In a possibility created by Phenomenon Intervention, Ragna took Arakune's desire and devoured it. [15] 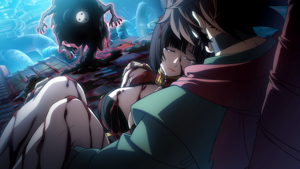 Later, Arakune was tracked down by Litchi, Tao, and Bang. He fought the three of them before swallowing Litchi, which allowed her to meet Roy, and then spitting her out again. Arakune desired to become a Black Beast through absorbing nearby seithr, but was stopped by Bang and eventually dissolved into seithr. [16] It is unknown if Arakune's data was backed up by Es, and he has not been seen since.