An Es-N unit was first seen confronting Touya Kagari and Es in the Wadatsumi Research Facility while Souichiro Unomaru talked to them over the speaker system. Unomaru told Touya to go into an elevator and come down to him if he wanted to talk, but specified that only Touya was welcome. Unomaru called Es garbage. Unomaru told Touya and Es about how the Es-N units had no will of their own, only listening to him and had a shared memory stored remotely. Unomaru ordered the Es-N to kill Es and capture Touya so Touya and Es ran. Touya went to confront Unomaru while Es stayed to fight Es-N. Es-N had all of Es's combat data, allowing it to predict her actions, making the battle difficult for Es. Es figured out a way around this by using unknown attack patterns and predicting Es-N's movements, allowing Es to defeat her. Es then killed the Es-N unit before moving on. 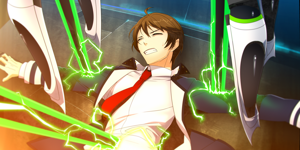 Preparing to refine the Embryo

Four more Es-N units were with Unomaru when he met Touya in the core of the T-System. Unomaru revealed that he created eight of them, with another on the way and had sent reinforcements to take care of Es. After a discussion with Touya about the T-System, Unomaru said it was time to refine the Embryo and ordered the Es-N units to release the Grimoire and they pinned Touya to the ground with their swords. Unomaru told Touya that the Es-N's weapons were made from Mei Amanohokosaka's blood and had the power to control the flow of seithr, allowing them to forcibly control the Origin of the Grimoire. [1]

Es reached the elevator to the basement but was ambushed by three more Es-N units. The three units quickly overwhelmed Es. Kuon Glamred Stroheim and Mei then arrived to back Es up.

Once Unomaru completely refined the Embryo, Sechs suddenly appeared and stabbed him with the Sword of Destruction: Kusanagi. Unomaru ordered the Es-N units to kill Sechs, but Sechs effortlessly defeated all of them.

One month after the Embryo Incident, Mei told Touya and Kuon that she had found the last Es-N unit and was reprogramming her to work for them, but Mei was having trouble switching its power sources from crystals to electricity. Mei said that she would probably be less efficient like that, but was sure she could compensate with her magic. [2]

Another month later, Mei succeeded in completing the last Es-N unit and enlisted its help in fighting the Union outbreak. [3]