Azrael (アズラエル) is an infamous criminal and mercenary who is well known for his absurd strength and thirst for blood. He has amassed many monikers in his career, such as Mad Dog, Genocider, and Deathbringer.

He made his playable debut in BlazBlue: Chrono Phantasma. 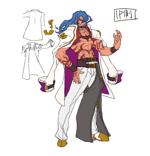 Azrael is a large, extremely muscular man with tanned skin and somewhat wavy, long blue hair. He has blood-red eyes, and his body is decorated in tattoos, the Enchant Dragunov, and he has a blue goatee. Azrael doesn't wear a shirt, instead he wears am untied cream jacket over his shoulders held to his body by a small brown strap around his chest. The coat's inner lining is a royal purple and the same color lies on the end of his sleeves near two brown belts. There are small golden parts on the shoulders of said coat, and there are small brown lines running close to, but not on, the rims of it. He also wears white trousers held onto his body with two brown belts with golden buckles. His left leg has a black cover on it and his shoes have golden tips.

A battle freak that constantly instigates fights with strong people. Because he fights only with his fists, he doesn't use weapons at all. However, since he is ridiculously strong, he worries that he won't be able to fight seriously, so he imposes a limiter on himself.[2][3][4]

Battle - the only thing that truly matters to Azrael. All he lusts for is a foe who can rival his incredible strength and keep him entertained. This lust has brought him from battlefield to battlefield, finding himself unsatisfied with nearly every fight he has.

His confidence borders on hubris as even allows some foes free hits on his body. In fights he can turn cruel as he will do whatever he can to goad his opponents into fighting him, taunting them over loved ones he may have killed or bringing harm to the people in the immediate area.

In the rare moment he is not fighting, Azrael is not completely unreasonable. He has a great understanding of what he wants, and is noted to despise bullying as it is a fundamental core of his beliefs that the strong should fight the strong, and not the weak. [5] Upon finally tasting defeat, Azrael accepted the feeling, admitting that it does not feel as bad as he had imagined.

Undoubtedly one of the strongest people to have ever existed. Azrael's true strength is actually completely unknown, as he is forced to hide it under a limiter called Enchant: Dragunov in order for him to even attempt having a fair fight. His power is capped at 1/8th under usual circumstances, but he has been known to release it to 2/8th's and even 4/8th's depending on the circumstances. Azrael's Drive is The Terror - each time he hits an opponent with his Drive, he exposes a weak point and additional Drive hits cause greater damage.

Even at his usual cap, Azrael's power almost denies physics. He can catch bullets in mid-air with his fingers and flick them back with an even stronger force, casually lift a slab of stone from the ground, and can break a man's shoulder by just placing his hand on it. His strength is so great that he can physically alter the space-time inside the Embryo and can tear through dimensions with his own hands. When releasing more of his limiters, Azrael can move faster than the eye can see. He refuses to use weapons and likes to fight using his body alone.

Strength is not just Azrael's one gimmick, however, as he has unlimited endurance, being able to take explosions and, after being thawed out of ice, was only so bothered as if he had woken up from sleep. This is one of the few ways to stop him, however, as under extreme temperatures, the Mad Dog cannot move, and it is the only way to detain him. Sector Seven also installed a collar on him which prevented him from fighting those who did not wish to, but this was removed when he was put in his dimensional prison. As a result of his wild fighting style, he can struggle against those who are well-trained, but this is only effective against his usual cap, as removing more caps on his power easily allows him to beat said opponents.

Azrael has fought against the likes of: Kagura Mutsuki, Hakumen, Ragna the Bloodedge, Valkenhayn R. Hellsing, Kokonoe, Nine the Phantom, Hades: Izanami, Nu-13, Rachel Alucard, Bullet, Iron Tager, and Houichirou Hazuki - he has not lost against one of them, drawing at best, and only being beaten by the combined efforts of Kagura and Jin Kisaragi.

Placed under a Sealing Designation by Sector Seven, "Mad Dog Azrael" possesses a superhuman strength that defies common sense. Once he begins fighting, he continues in an unstoppable rampage until everything is destroyed, earning him the moniker of "Deathbringer." Released from his cell and searching for a "hunting ground," the Mad Dog sets his sights on Ikaruga.[6]

He bears a superhuman strength that defies common sense. Once he begins fighting, he'll attack anyone, friend or foe, and continue uncontrollably until everything is destroyed. For this reason, he gained the moniker "Deathbringer." He was sealed in a Dimensional Prison by Kokonoe, but after sensing the presence of the "Chosen," he begins acting in search of that strong prey.[7]

A battle freak that constantly instigates fights with strong people. Because he fights only with his fists, he doesn't use weapons at all. However, since he is ridiculously strong, he worries that he won't be able to fight seriously, so he imposes a limiter on himself.[2][3][4]

A notorious criminal sealed away in Sector Seven's dimensional prison. He is more commonly known as the Mad Dog.

He is a hired gun, but for some reason has strength that seems to break the laws of physics as we know it. When on the battlefield, the odds of any survivors, friend or foe, is reduced to zero. He is a dangerous man. Genocider and Deathbringer are also names he has acquired from the terror he brings to the battlefield.

He may be violent and cruel, but most of his actions grounded in some form of strategy. Bloodthirst would be his fatal flaw, which is what brings him back to the battlefield time ad time again. He refuses to fight with anything other than his own flesh and blood, which is why we never see him with a weapon. Despite that, he must still hold back his strength to have somewhat fair fight.

On orders from the Committee to retrieve the Azure Grimoire, he heads to Ikaruga to carry out his mission... or rather, his hunting grounds. [8]

Owner of a strength that deviates from common sense, and a natural-born fighter. Once he begins fighting, he becomes uncontrollable and will destroy both enemies and friends.

Only fighting with his own body, the Mad Dog. His mid and low attacks, when timed carefully, will increase his might! Teach the opponent fear with his high damage combos![9]