Kazuma was created by Relius Clover to be a vessel for Yuuki Terumi. In 2106AD he was manufactured outside of the Magister's City of Ishana but was eventually transported to the island with Relius supposedly as his guardian. On January 11th, Kazuma's consciousness came into existence and he believed his memories were wiped and he could only remember the last seven years. Kazuma believed himself a student of Relius and was unaware that his tutor was The One of the Ten Sages. After a week, he attended classes, being put in the same ones as Konoe A. Mercury and Trinity Glassfille. During an alchemy experiment, Kazuma was severely burned, but the wound almost instantly healed by the time he made it to the infirmary.

Kazuma awoke from a dream where he was Hazama fighting against Ragna the Bloodedge atop the Monolith in the 13th Hierarchical City of Kagutsuchi - an event that wouldn't happen for nearly 100 years in the future. It was January, and the student remembered that it was the day for Konoe's canonization as one of the Ten Sages. Although disheartened by jealousy, Kazuma continued his day and headed for lessons. In the cafeteria, the boy looked forward to eating a boiled egg, yet was interrupted by Trinity, Konoe (who had now become Nine), and the latter's younger sister - Celica A. Mercury. 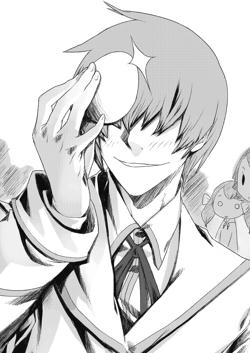 Although he did not want to spend lunch with the girls, Kazuma relented, feeling an immediate dislike towards Celica and taking every ruthless comment from Nine. When the sister's left to argue, Trinity apologized for Nine's behaviour and the two talked until news came in from the nearby television about a Japanese survivor. Kazuma, having spent too much time near Celica, became terribly sick and ran out of the cafe, unable to continue being near her, yet trying to smile through the pain.[1]

Escaping from the infirmary, Kazuma returned home although still dizzy from his encounter with Celica. He entered a narrow alley to return home and heard a voice telling him to dodge. Almost instinctively, Kazuma dodged a blow from a beastkin with twin swords. Reflexively the boy began to smile, and the beastkin asked if he was Kazuma Kval. He then introduced himself as Tomonori and lunged at Kazuma again, but the student somehow dodged the attack and bolted out of the area. Abruptly, Tomonori retreated just before he was about to kill the boy. Despite the dodge, Tomonori had still dealt deep blow to Kazuma's left arm.

Nine, Celica, and Trinity arrived. The latter two girls expressed their concern and Celica attempted to heal Kazuma but he brushed her aside. Nine asked about the situation and he tried his best to explain that he was assaulted by a strange cat-like creature. Trinity insisted on helping him back to his dorm and they walked side-by-side to it. Kazuma almost instantly collapsed onto his bed. He had a dream about Relius and Shuichiro, and the Azure was mentioned. When he awoke, he saw Terumi next to his bedside, and the man asked if he wanted the Azure.[2]

Kazuma was enticed by the promise of the Azure, as it meant he could restore his missing memories. He barely paid any attention to his lessons that day on the history of sorcery. He then skipped two days worth of lessons and spent his time in Ishana's Great Library to research the Azure. He was found by Trinity, and he told her about how desperately he wanted his memories back just so he could understand the feelings of himself and others. He asked if she could ask Nine for permission to look at classified materials, but he was rejected.

As he returned home, Kazuma was met by Terumi, who teased him about not being able to get the information he wanted. They arrived at a public park, and Terumi told him about the Azure's information being locked within the Ishanan Cathedral. They were trapped by Ars Magus and met by three half-beastkin. They attacked him, and Kazuma dodged all their attacks. He begged Terumi for help but only received it when he promised the man that he would obtain the Azure. Terumi then saved Kazuma and effortlessly fought off the assailants.

Returning back to his dorm, Trinity knocked on Kazuma's door. She told him that she was genuinely concerned for his safety and left, offering that he could use her strength whenever he needed her. Closing the door, Terumi laughed and told Kazuma to not swallow her words and that she was spying on him for Nine. With this, Kazuma began to doubt his only real friend on the island.[3]

After class the following day, Trinity invited Kazuma to have tea with her. He accepted, thinking it would just be the two of them. When he arrived, Celica and Nine were also present. They sat and drank together, although the boy was noticeably shocked by the amount of sugar and gomme syrup she poured into her coffee. Nine asked why he had spent so much time in the Library; changing the subject, Kazuma mentioned Shuichiro, which caused Celica and Nine to argue over him as they always have. Trinity ended the fight and Terumi lingered outside the cafe's window. Kazuma left and ran after him. 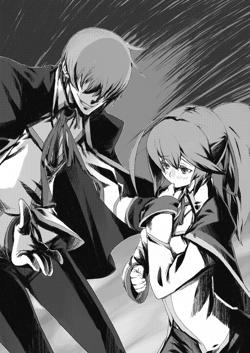 He followed Terumi to the edge of Ishana, and was shown a tear in the magical barrier that allowed Tomonori and the assassins to enter. They formulated a plan to distract the Ten Sages by having their efforts focused on fixing the tear. With them distracted, the two of them could enter the Cathedral. Terumi disappeared and both Trinity and Nine arrived. The latter investigated the tear and barely allowed Kazuma off with his weak excuses.[4]

Celica met Kazuma at the beach. He began to leak poison into her ears, telling her that it was very likely that Shuichiro had survived given the news the other day, and that she should try to find him by using the tear in the island's barrier to escape. He told her that there was now ferries to Japan and that she could search for him if she wanted. Kazuma feigned concern for her, and told her to leave if she wanted to save her father. He then left for his dorm after telling Celica how to escape. 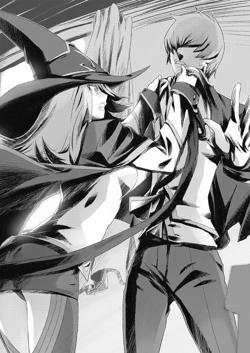 The following morning, Nine burst into the boy's dorms and threatened to burn Kazuma's door down. She burst in and grabbed him by his collar, demanding to know Celica's location. Trinity stopped her from nearly killing him and threw him a letter wrote by Celica. Kazuma stated that he knew nothing about where Celica was, and Nine grabbed him by his collar again. Kazuma was saved by conveying sorcery that asked for Nine to attend to her duties as a Sage. She left and Trinity helped Kazuma up before leaving, crying to herself. When they left, Kazuma began to manically laugh to himself, convinced that he had fooled them both with his lies.

With the Ten Sages distracted, Kazuma infiltrated the Cathedral. Before he could get inside, Trinity met him, and said that she was waiting for him after remembering their conversation in the Great Library. She begged him not to leave and accused him of being the reason why Celica had disappeared. She continued to beg until Kazuma had enough and raised his hand, unleashing a sorcery shock wave and knocking her unconscious as she collided with a nearby wall. As he descended down the staircase, Kazuma continued his maniacal laughter.[5]

Somehow, Kazuma managed to slip past the barrier that kept the Cathedral safe from outsiders. Within it, he marvelled at the grand scale of the building before proceeding deeper and deeper. He shouted out to Terumi and had a response, although the man was nowhere to be seen. Kazuma followed the voice to the centre of the Cathedral and placed his hands on the floor - directly below it was a Cauldron. Suddenly, Kazuma's memories came flooding back to him and he finally remembered who he was, realising that he had never lost his memories, but that he was in fact just an artificial existence created by Relius. Terumi and Kazuma began to merge as the student accepted his fate.

They were interrupted by Tomonori, who launched himself at the student and began a wild flurry of attacks. Terumi watched on and sneered until the beastkin drew Hihiirokane, the only weapon which could kill him. Using defensive sorcery, Kazuma continually deflected the blows Tomonori launched at the student, and then with Terumi, Kazuma summoned a version of Geminus Anguium: Ouroboros. Kazuma was in full control of his body, and used the chains of Ouroboros to attack. Tomonori caught him off guard and landed a deadly blow with Hihiirokane, scarring the boy's abdomen.

Angry, Kazuma pierced Tomonori's body as he began to bleed onto the floor. Kazuma continued to kick the downed beastkin with as much force as he could, screaming at him again and again. The kicks were merciless and Tomonori's small body was breaking under the force. It finally ended as countless shadowy serpents came from Kazuma's body and began to eat into the beastkin's body. Just as Kazuma was about to leave, he was found by Valkenhayn R. Hellsing who knocked him unconscious. He was then locked in the deepest darkest part of the Alucard Castle by Valkenhayn and Clavis Alucard.[6]

Nine, Jubei, and Valkenhayn eventually went into the prison that held Kazuma, who had perfectly fused with Terumi. Mind Eater was placed by Nine onto Terumi, and he was put under her control. Kazuma, however, was still free to act whenever he could take over the body, something that no one had predicted.[7] As months passed, no one was aware of Kazuma still possessing autonomy over his body; Terumi was recruited into a group of warriors that would become the Six Heroes, which included Hakumen, Jubei, Nine, Trinity, and Valkenhayn.

Terumi was subject to Nine's every single command. He managed to escape her notice under the guise of needing to use a toilet. Kazuma took control and appeared before Seven and Eight, two of the Ten Sages who were in the mind of using the Gigant: Take-Mikazuchi.[8] Mind Eater forced Terumi to tell the truth to Nine, but since Kazuma was in control of the body, the interaction between the Sages and Kazuma was never unveiled.

Kazuma organised the OLN to help get Gigant: Take-Mikazuchi into an area where Seven and Eight could summon it to fight the Black Beast in Eastern Europe. When they returned, Kazuma stalked them into Ishana’s Cathedral and began to coyly taunt them both from the shadows about his involvement with both the OLN and who he really is. He left as quickly as he had arrived after asking them both to trust him, filling both Sages with a sense of unease. Terumi then took over the body once more. [9]