Thirteen years before the Embryo Incident, Kazuto Kotetsu was a police officer. He was one of the officers in charge of guarding Ripper's prison transport. However, Ripper suddenly developed his Drive and attacked the police officers. Miraculously, Kazuto alone somehow survived. He followed Ripper to Yuki Himezuru's house, whose parents were his best friends, and shot Ripper, saving Yuki from him. He then disappeared, becoming the bounty hunter known as Avenge to hunt down Unions and Ripper specifically.

Three years later, Avenge was hired by the Magic Guild to guard a Mage at the Wadatsumi Research Facility. When the Wadatsumi Incident occurred, he tried to run from the black wind but got trapped underneath a piece of rubble. Suddenly, Sui Amanohokosaka arrived and saved him, but said he needed to help her in return. She told him to go somewhere and receive something to hide where no one could find it. Arriving at the specified location, Avenge found a dying Ryouko Kagari, who gave Hinata to him. He then took Hinata to the same orphanage as Yuki and asked Yuki to act like an older sister to Hinata, forging documents to make Hinata and Yuki appear to be blood related.

He first appeared in the middle of a battle between Es and Ripper, attacking Ripper. After Ripper escaped, he told Touya Kagari, Es and Mei Amanohokosaka to leave Ripper to him and he'd kill them if they got in his way. Touya approached him, saying he has no right to threated people, but Avenge knocked him out for his trouble before leaving. [1]

One night, he approached Yuki and said it's been 10 years. He told her to take her family and leave the city because something similar to “that day” would probably happen again before leaving. [2]

Avenge met Yuki at Mei's request. Yuki apologized for tricking him by telling him it was for a job. Avenge said it was fine since he owed the Amanohokosaka Clan a favor but then remembered he already repaid the debt. Yuki asked him about Hinata's past. Avenge said she shouldn't ask because she would be getting involved, but Yuki was adamant that she needed to if something dangerous was happening so she wouldn't lose another family and Avenge gave in. After moving to a safer location, Avenge said that Hinata was a Wadatsumi survivor and was likely connected to the event, confirming Yuki's suspicions based on the dream Hinata had told her about. He then told her about how, at Sui Amanohokosaka's request, he had received Hinata from a dying Ryouko Kagari and brought her to Yuki. Avenge apologized for not getting Hinata's name, but Yuki thanked him for it since she was able to name her herself, explaining how Hinata saved her from her depression. Yuki then asked Avenge how long he planned to continue on as “Avenge” and Avenge replied that he hadn't avenged anything yet. He once again told her to leave the city since an event worse than the Wadatsumi Incident could happen and Touya was at the center of it. However, he said he would help them. Yuki said that next time they met, they should all go out for barbecue and that she would introduce Avenge as Touya's father. Avenge then left. [3]

That night, he found Ripper, who was extremely weakened due to the attack from Touya unleashing the Origin of the Grimoire, in the sewers and attacked him. Ripper claimed that he surrenders but tried to attack Avenge when he approached. However, Avenge saw this coming and countered his attack before killing Ripper. At the docks, he talked to himself, telling Yuki he finally took care of Ripper. Remembering Yuki's words that she will not leave the city, he said that he would protect her family. [4] 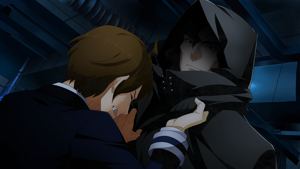 Touya demands to know the truth

Later, he found Touya and Es in the sewers and helped them escape from the Mitsurugi Agency's agents. Touya wanted to know why Avenge was helping them and Avenge said it was because he felt like it. Touya thanked him but Avenge said he should be thanking Touya for allowing him to kill Ripper. Touya didn't know how to feel about Ripper being dead and Avenge said he was stronger then he seemed. Avenge said that he was basically a serial killer who was no different than Ripper for hunting down and killing Unions, but he could live with it as long as he was aware of it. He then told Touya that, while he didn't kill Ripper himself, it was his actions that led to Ripper's death and he must accept that, with Touya saying yes. Avenge then asked Touya if he wanted to know about his mother, Ryouko Kagari's, role in the Wadatsumi Incident, even if he'd be better off knowing. Touya grabbed Avenge and demanded to know. Avenge told Touya that the Takamagahara Group was forcing Touya's mother to build the T-System and that the Embryo was meant to be its core. Touya was shocked that it meant Souichiro Unomaru was doing as the Ten Sages said, which surprised Avenge that Unomaru was continuing Takamagahara's research. Es then explained about the Embryo's power to use Phenomenon Intervention and that with it would be possible for the T-System to control the thoughts of everyone on the planet. Es said that the T-System would be impossible since they didn't have an energy source big enough for it but Touya realized that they intended to use the Boundary and its infinite supply of seithr. Suddenly Es detected a large number of Mitsurugi Agency soldiers and Avenge told them to go ahead while he dealt with them. [5] Avenge then saved Touya and Es from Drei's attacks. He told the two of them to leave Drei to him and run and that Mei would be waiting for them. After Touya and Es ran off, Drei said he would deal with Avenge first at his leisure. Drei asked Avenge why he was attacking him even though Avenge only hunts down Unions, which Drei was not. Avenge was angry that the Magic Guild lied to him but Drei said it didn't change anything, and he would kill anyone who got in Sechs's way, calling Sechs the only “true” member of the Ten Sages. Avenge asked Drei why he was so obsessed with the Ten Sages and, despite finding Drei's intentions honorable, Avenge insisted he would kill him. Drei then prepared to attack and Avenge said he was much more powerful than anyone else he's faced.

After the battle, an injured Avenge remained in the sewers. He complained that Drei got away but figured that he only had a few minutes left based on his wounds. As he prepared to succumb to his wounds, he was approached by Zwei. Zwei claimed to just be a curry restaurant waitress but Avenge recognized her and asked if she was there to avenge Drei. Zwei said she wanted to thank him and used healing magic on him, but said that healing magic wasn't her speciality so all she could do was patch him up. Avenge wanted to know what she wanted in exchange so Zwei asked him to protect Touya and his friends. Since they were about to attack the Mitsurugi Agency, she wanted him to clear out the foot soldiers. Avenge said that Zwei should be able to do that easily, but she said she was in hiding and that it was not her fight. Avenge promised to repay his debt. Zwei offered to make him curry if he succeeds but he declined. [6] 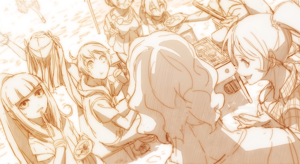 One month after the Embryo incident, Avenge cancelled his contract with the Magic Guild and was hired to support the Mei and the Mitsurugi Agency. [7]

In the Restricted Ward, Avenge approached Touya, saying Mei told him to come. Touya explained to Avenge about his desire to regain his memories and wanted to ask Avenge what kind of person his mother was. Avenge said he didn't care whether or not Touya got his memory back and started to walk away. Touya begged him to say anything since he was the only person who knew his mother. Avenge claimed he had only talked to her a couple of times. Avenge told Touya that his mother worked as a scientist at the Wadatsumi Research Facility and that he had been hired by the Magic Guild as a bodyguard for a high-ranking mage. Avenge said he never spoke to Touya's mother, but did once run into her when she was speaking to Sui Amanohokosaka, Mei's mother.

Ryouko was talking about how she had to protect something and would do whatever it took to do so. Avenge then told Touya that even though he was found in the Restricted Ward after the incident, he had not seen Touya in the days leading up to the incident. Avenge prepared to leave again, saying that he told Touya he wouldn't be able to help him regain his memories, but if he couldn't let go, he needed to keep fighting. Avenge then left. [8]

Sometime after the battle with Freaks, Yuki keeps her promise to Avenge and brings him to a barbecue with the rest of her family and friends.