A travelling performer and manager of a troupe consisting of orphans of war that he has adopted, Amane roams the globe. Around 2190, Amane was hired by a mercenary squad's drill sergeant as an instructor for their "troops" on integrating new combat moves into their arsenal. Amane misunderstood, thinking that they were a "troupe" who needed to be taught new dancing styles. For three days and nights, he made the troops dance traditional Oriental dances before realising his mistake and vanishing. Bullet, then a young girl, never forgot the incident, swearing revenge. [1]

The beautiful leader of a dance troupe, "Amane." From a young age he wished to grasp the true essence of dance, and obtained the "dance" of battle. He prefers unparallelled "pretty boys," and after hearing rumors of one such young vigilante, he journeyed all the way to the Ikaruga Region to scount him. [2]

In the February of 2200AD, Amane took his troupe to the 7th Hierarchical City of Kazamotsu where he announced that they were to have a vacation from their hard-work. As soon as the group left, Amane went to find Carl Clover. Before he could proceed to scout for the boy, two girls from the troupe came to him, telling him that they saw the Novus Orbis Librarium drag Iron Tager away. Excited, he went the way that they were taken.[3]

Some time later, Amane found Ragna the Bloodedge in Varubtuke Source, but was ignored by the Grim Reaper. He got his attention and then told him that he had all the potential to become the leading man of a play, likely Amane's way of telling Ragna that he had the potential to become something great. They began to battle, and Amane won, taking his leave after having witnessed Ragna's strength. He then resumed his pursuit of Carl.[4]

Amane did eventually find Carl at the Lakeside Port, although the boy had just had a troubling confrontation with his father, Relius Clover. Amane asked for his time, but the boy was not in the mood to talk. He asked the boy to become his, but was rejected. He later watched with Rachel as Ragna battled against Kagura Mutsuki and lost. Amane reminded the vampire to not interfere too much with the world's events.[5] At some point he came across Valkenhayn R. Hellsing and told him Rachel's location, although he did reprimand the vampire for her extreme methods and lamented over the loss of most of her power as an Onlooker.[6]

In the 8th Hierarchical City of Wadatsumi, Amane was approached by Bang Shishigami, who believed that the troupe leader was a spy for the NOL. Amane gave the idea some fancy, which led to the two of them fighting. There was no victor as both came to respect one another's fighting styles during the match, leading to a “manly” friendship which had been forged in battle. Bang knew of Carl but could not tell Amane where he was, so Amane left, cryptically telling the ninja that there was doubt in him and that he should visit his roots to solve the problem.

As Amane left, he bumped into Bullet, who recognized from years before but did not think they could be the same person. She told him the story of her unit's tortured dancing and at the end of it, Amane confessed it was actually him who put them through that. Bullet then attacked him, but the battle was a stalemate. He told her to follow her instincts and then left her be, laughing merrily.[7]

From a young age, Amane travelled to grasp the true essense of dance. He realized that the origins of "dance" lie the ideals of the "martial arts," and obtained the "dance" of battle. He prefers unparallelled "pretty boys," and journeyed to gather a number of "pretty boys" and establish positions for them. Concerned about the fate of the world, he decides to Observe it.[8]

As with many others, Amane was absorbed into the Embryo, although his memories remained unaffected, and he became one of the chosen. He found Rachel in the Kagutsuchi Port in a distorted reality of the 13th Hierarchical City of Kagutsuchi, and began to warn her about how much she was intervening in the world – but he did grant her his blessing to continue forward as “everyone is an actor once on stage”. [9]

Mimicking Rachel's teleportation, Amane used sorcery to transfer Ragna the Bloodedge to his location next to the Kushinada's Lynchpin. He offered Ragna to join his troupe, a metaphor for Observation. Although he was turned down, Amane listened to the Grim Reaper's plan to create a new possibility using Soul Eater to take the desires of the chosen. Gleefully, Amane told him that he would watch what he could do, teleporting Ragna back to Wadatsumi. [10]

Valkenhayn R. Hellsing found Amane at the Altar atop Kagutsuchi. The lycanthrope told him about Rachel's disappearing state and that he was going to kill the Onlooker to save his young mistress. They battled, but Amane revealed that because Valkenhayn exists outside of Logic, there is no way that he can kill an Onlooker and change the world. Amane further asked him where his loyalties truly lie – with his promise to Clavis Alucard to protect Rachel, or to the girl herself. He answered the latter, so the Onlooker told him of Ragna's plan and how that would save the young vampire from disappearing. [11] He later came to the battle between Es and Makoto Nanaya, seeing the latter off as she dissolved into seithr and commending her on how brilliantly she fought. Es left to pursue Naoto Kurogane afterwards, and Amane allowed her. [12] 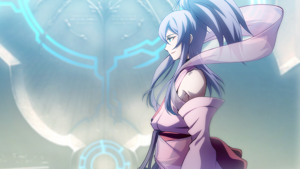 A final conversation with the Man of the Azure

Amane met Es at the Gate, and told her to rest easy as she dissolved into seithr, believing that she had made the right choice to believe in others, not something as grandiose as possibilities. [13] He was the last of the chosen to dissolve into seithr, and met Ragna in his final moments, calling his dance “majestic.”[14]

Amane soon dissolved into seithr and was reborn in the new world created by Ragna, wandering the world with his troupe. [15]