Prior to the beginning of the Dark War, Tomonori lived in a village in Japan with the rest of his clan, hidden from the world. However, the appearance of the Black Beast in Japan caused the world to launch nuclear strikes at the country to eradicate it, and the beastkins were forced to immigrate. Many of their people went to fight the Black Beast, and all lost. At some point, Tomonori and Jubei helped to shelter half-beastkins in their new village, aware that they had nowhere to go.

Six years after having lost his home, Tomonori was hired by the Alucard Clan, specifically Clavis Alucard, to observe Kazuma Kval, and in the worst scenario, kill him if necessary, but he took his own initiative and decided to hunt him instead. Tomonori first appeared when Kazuma was walking down a street in Magister's City of Ishana, the sorcery capital, and attempted to assassinate him, but failed despite inflicting a nasty wound to the boy's shoulder. The battle was over quickly as Kazuma continually dodged his attacks.

Not long afterwards, Tomonori met with Rachel Alucard, and she scolded him for trying to kill Kazuma. She then took him back with her to the Alucard Castle, where Clavis reprimanded him for almost killing someone who hadn't committed anything worthy of death. Tomonori clashed with Clavis and his servant, Valkenhayn R. Hellsing, over the future of Kazuma, and the cat left when he was compared to Jubei over his attitude.[1] 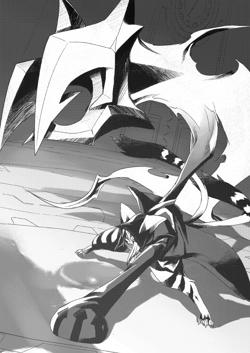 Tomonori would later send half-beastkins to assault Kazuma at Ishana, but they were beaten by Kazuma thanks to the influence Terumi was having over him. The beastkin was watching from afar, and retreated after Terumi noticed his presence.[2]

An unspecified amount of time later, Tomonori went back to his village. He took the Hihiirokane, a treasure sacred to his people and something that could kill Terumi by attacking his soul, and encountered Jubei. Tomonori refused to take the half-beastkins with him on his mission to kill Terumi, knowing that they would die. With Jubei's blessing, Tomonori ventured towards Ishana. This would be the last time the brother's saw one another.[3]

Eventually, Tomonori stalked Kazuma into Ishana's cathedral basement, however, by the time he arrived, Kazuma and Terumi had already fully merged. The two battled intensely, but Kazuma's barrier sorcery and imitation of the Nox Nyctores: Geminus Anguium: Ouroboros was overwhelming.

Tomonori's body was pierced by Ouroboros, but he still continued forward and successfully slashed Kazuma's abdomen with Hihiirokane. Kazuma threw him around with the chains, and Tomonori was unable to get himself up from his pool of blood created by his grievous wounds. He was kicked repeatedly, his silver fur blackened with his own blood. After Kazuma had his fun, he let out shadow serpents that began to eat into Tomonori's body. By the time Kazuma looked back, Tomonori had already died from the vicious beatings.

Valkenhayn was sent to assist Tomonori by Clavis, but he was too late. He subdued Kazuma, and recovered Tomonori's corpse. Clavis would later feel regret over Tomonori's death, lamenting over whether he should've stopped him, or sent Valkenhayn earlier.[4] Jubei would later take Tomonori's right eye as his own, and had it hidden under an eyepatch. This eye would become known as the Eye of Tomonori, which had seen Terumi's true form, and would allow him to become weakened nearly a 100 years later. The Hihiirokane was later buried with Clavis when he died not long afterwards.