Izanami had made her base of operations the Magister's City of Ishana. Relius, with Ignis by his side, was surprised to hear about her talk about fate as she reflected on the usefulness of Gigant: Take-Mikazuchi. She complimented him on her vessel, also learning that Phantom was taking care of Take-Mikazuchi. As Relius left, Izanami was found by Terumi. She coldly greeted him and asked about the status of Tsubaki and Hakumen. His answers did not satisfy her as she believed he was taking the entire situation far too casually. Terumi then aggressively asked her about why she let Ragna escape in Kagutsuchi, and she coldly reminded him that she could kill with him even by exerting little effort.[1]

With Phantom, Izanami came to the burned remains of Celica A. Mercury's Church. She interrupted Ragna and Rachel, who had been discussing how to deal with the Imperator herself. Izanami asked Ragna to become her servant, and in exchange would give him Terumi's head. When she was refused, she taunted him, pretending that Saya missed him. Ragna lunged for her, but Izanami effortlessly dodged – Phantom bound him and as the pair left, Izanami told the Grim Reaper that her offer would stand, and that he could visit her anytime he wished. [2]

When Tsubaki faced against Jin, Noel, and Makoto Nanaya, Izanami took it upon herself to heavily set own conscious over Tsubaki's telling the group that they would meet their deaths. When Tsubaki thought she killed Jin, however, the spell was broken and Izanami's grip over the girl was released.[3] She later witnessed Rachel sending Ragna back in time to the Dark War, calling her heavy intervention a foolish act. She then ordered Phantom to destroy Takamagahara.[4]

Izanami and Phantom went into the Yabiko branch, assaulting Jin, Kagura, Hibiki Kohaku and Homura Amanohokosaka. She taunted them and then publicly relinquished her position as Imperator to Homura, announcing the event to the entire world. The Goddess of death then attacked Kagura again and again, severely damaging him before teleporting away. She was attacked by Jubei, but Izanami decided that Phantom was better suited to that task, unleashing her true form as Nine. The former Imperator then summoned the Gigant: Take-Mikazuchi from its orbit, planning to have it destroy everything. Unfortunately, its movements were delayed by Celica A. Mercury and her ability to nullify seithr. Izanami, wielding Take-Mikazuchi, then battled against Jin and then Noel.[5]

After the battle, Izanami saw that the flow of seithr had stopped as the Lynchpin was activated by Bang Shishigami. She leant her power to Take-Mikazuchi to allow it to fight and assisted it in battle against Ragna. Despite this, it was still defeated, but Izanami was not. She averted Hakumen's Time Killer and had Phantom return to her side; she then turned her attention to Ragna and forced his Azure Grimoire to go berserk. Before she was finished, Izanami took to the sky and condensed Take-Mikazuchi's remains, creating an Embryo. She attempted to attack the Amaterasu Unit, but Rachel and the Tsukuyomi Unit blocked her assault. Izanami promised Rachel that she would give the vampire death, and was met with a retort – that she would be given life.[6]

Some time later, both Izanami and Phantom accidentally teleported to the church again, only this time they found Celica A. Mercury herself standing there. Perplexed, Izanami commanded that Phantom teleport them away, something she did after gazing at her little sister. When she returned to Ishana, she jumped into its cauldron activate Takamagahara.[7]

Hades that descended to bring "death" equally to all living things. She possessed the body of Ragna and Jin's younger sister "Saya" and provided the template for the Boundary Interface Prime Field Device series above No.10. She was the long-time "Imperator" of the NOL and aimed to bring about "Doomsday." And now, she has achieved that goal— [8]

Before the Doomsday began, Izanami went to the Amaterasu Unit, and opened it up, showing that inside, there was no one. She soon summoned Noel and Rachel to her location to force Noel to Observe where she had placed Ragna – inside the Embryo. She then journeyed into the Embryo herself. [9] 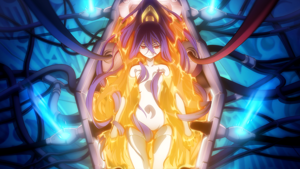 Inside, she bathed in one of the Prime Field coffins, asking Relius about the vessel she was possessing. She dressed herself and travelled to Ikaruga, realising that Nine had set the chosen against her, [10] and later watched as Relius and Ragna fought in Akitsu, being interrupted by Azrael and fighting him. He grew bored however since there is no life emanating from her, and the two formed a pact – should Azrael defeat all the chosen, Izanami would grant him access to the world of the Gods where he could fight them for all eternity. [11]

Witnessing Azrael fighting against Ragna, she summoned the latter to her location next to the Amaterasu Unit. They fought, every moment with her mocking him with Saya's voice. Noticing that his strikes were filled with unwillingness to hurt his sister's body, Izanami rammed herself into his sword, telling him that she cannot die as Amaterasu's Drive. Amaterasu intervened and used phenomenon intervention to send Ragna away from her location. [12] 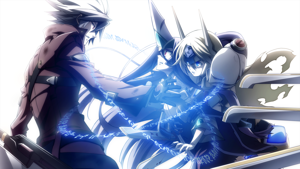 Ragna and Noel find a way to defeat “death”

Izanami infiltrated Nine's workshop, finding her defeated by Ragna. She offered death to Kokonoe, Celica, Jubei, Ragna, Jin, Nine, and Rachel before being stopped by one of Nine's strongest fields. Nu followed after her master, attacking the witch but being stopped by Jubei. Izanami remained inside the workshop as time froze over, watching Nine die. [13] She broke the space-time, transferring the Requiem to a different location and issuing an illusionary message to Ragna, Noel, Kagura, Jin, Hakumen, Tsubaki, and Ex Machina: Minerva, warning them all that if they could not find her in three hours, they would all perish in Requiem's explosion. [14] Eventually, Ragna and Mu found her, and she was absorbed by the latter despite being up a resilient fight. Izanami, from that point on, no longer existed, having merged together with Noel's soul. [15]