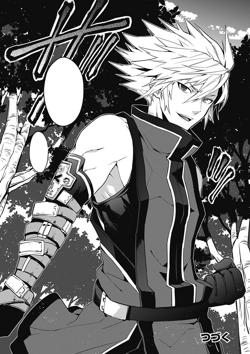 The Azure Grimoire (蒼の魔道書 Ao no Madōsho), also known as the BlazBlue (ブレイブルー Bureiburū) and Original Codex (原書 Gensho), is the Grimoire wielded by Ragna the Bloodedge. It is a Grimoire that connects directly to the Boundary and gifts its user the Soul Eater Drive. Although arguably the most powerful Grimoire, it is also one of the weakest. It is an imitation of the Azure Flamed Grimoire.

The basis for the Azure Grimoire was created by Yuuki Terumi from the corpse of the Black Beast.[1] The Azure Grimoire has no real shape; it changes shape for its user, and has taken on the appearance of a headless mannequin and Ragna's right arm. Regardless of its shape, the Grimoire has always been seen as pure black - it can also change its wielder's eye color to red. It is functionally similar to the Blue Grimoire.

This Grimoire is unique because of its ability to directly contact the Boundary, and is essentially a cauldron in its own right. If combined with a Boundary Interface Prime Field Device, it can become a Black Beast - this happens when the fusion goes out of control. However, if the fusion is perfect, or done with a piece of the Azure, then a Kusanagi is made, which is the perfect Prime Field Device. Another of its powers is to grant its wielder the Soul Eater Drive, which generates an aura that gradually drains the souls of others into the Grimoire; an additional part of this power is that it can steal the wishes of the chosen. It can also grant its wielder the ability to use Ars Magus, regardless of their aptitude. To prevent the seithr from the cauldron corrupting him, Ragna has to wear two seithr regulators.

Nine the Phantom begun development on the Burning Red Grimoire, which was to be paired with the Azure Grimoire, but it was never completed in her lifetime.[2] Kokonoe has argued that the Azure Grimoire is incomplete, and that it is also the weakest Grimoire because of its overwhelming weakness - it eats its user's soul.[3] Late in 2200, Ragna's overuse of the Azure Grimoire heavily corrupted his right half and drastically shortened his lifespan.[4]

Rachel Alucard gifted the Azure Grimoire to Ragna to stop him from dying from a wound caused by Jin Kisaragi and Terumi.[5] Many rumors surround the Azure Grimoire. Some believe that it can do practically anything, such as helping turn Nox Nyctores' into humans, or being able to reverse the effects of the Boundary on the human body. According to Relius Clover, the Azure Grimoire also has a piece of the Azure, allowing it to be capable of killing cauldrons.[6]

Ragna has had many different calls for activating the Azure Grimoire in the series, the most common ones being:

Ragna calls for the power of the Azure Grimoire as a last ditch effort to defeat Hakumen after being interrupted by Kokonoe.

There are two different activation calls Ragna uses in Continuum Shift. One call is used by Ragna during his and Hazama's arcade modes, and the other is used in Continuum Shift's story, after he absorbs the Idea Engine from Lambda-11, who was destroyed by Terumi.

Ragna has another altered version of the activation call in Chrono Phantasma's arcade mode when trying to use it against Nu-13 as a last ditch effort, only to be interrupted by a Phenomenon Intervention caused by Terumi.

Ragna has two versions of the activation call in the Alter Memory anime. The first when fighting Hakumen, and the other when fighting Terumi after absorbing the Idea Engine.

It is said to be the 'strongest' Grimoire. It is also called the 'original codex.' While it's called a Grimoire, it's actually a high density mass of compressed Seithr similar to the 'Black Beast,' and has no definite shape. It's currently taking the form of Ragna the Bloodedge's right arm.

Its original purpose is to utilize the 'power of the Boundary' similarly to a Cauldron, and was smelted with the power to oppose the Master Unit. However, it went out of control while absorbing excessive numbers of souls, becoming the 'Black Beast' seeking out more souls indiscriminately.

The basis for this Azure Grimoire was designed and created by Yuuki Terumi.[7]

One of the spells necessary for Ragna and Hazama to utilize their BlazBlue. Details are unknown.[8]

One of the spells necessary for Ragna and Hazama to utilize their BlazBlue. Details are unknown.[9]

The grimoire hiding the power hailed as the strongest, the "Azure," is destined to be coveted by many. However, those aware of its true appearance are few and far between...