Haruka lives in Shin Kawahama City with her mother, Yuki, and was raised solely by her mother. Growing up, she was very close to her cousin, Naoto, and they would spend a lot of time together. Naoto's family was killed by Saya, his younger sister, and Saya was sent to the main Amanohokosaka Clan household. Naoto came to live with Haruka and the two grew closer. Naoto eventually moved out to an apartment owned by Yuki and Haruka got into the routine of visiting him every day before and after school. Haruka also joined the Student Council and became friends with Kana Kirishima, the Vice-President. 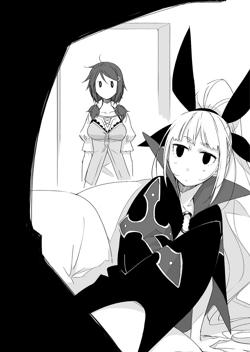 In October, Haruka woke Naoto up before school began and teased him about the dating simulator games he had been playing. They walked to school together and sat in the homeroom. She had Geography later that day with Tadayuki Isa, and told Naoto that she thought he was acting weird. Haruka returned home that day without Naoto as he stayed behind.[1]

When Haruka walked into Naoto's apartment the following morning, she found Raquel Alucard naked on his sofa as the boy attempted to put clothes on her. Raquel used Slave Red on Haruka so the girl believed that the vampire and Naoto were cousins, as to not rouse her suspicion. Haruka then dragged Raquel away and dressed her in some of Yuki's collected clothes.[2]

Haruka opened Naoto's apartment to Clavis Alucard and offered him tea, to which he was delighted with. He put the girl to sleep with sorcery and made her rest in another room. Haruka stayed asleep as Valkenhayn R. Hellsing and Relius Clover destroyed the apartment in a battle against Clavis. When she awoke, she saw the destroyed apartment and several lawyers from the Mitsurugi Agency spoke to her to explain that it was their fault and that they would pay for the damages. 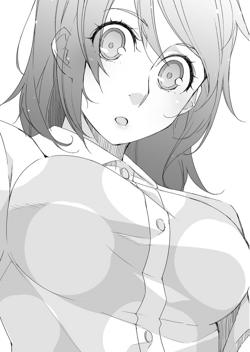 In the evening, Haruka made tea for Naoto and Raquel. The boy fell asleep in her lap, and Haruka sung a nursery rhyme to him as he laid there. He awoke and they talked about where Naoto would be staying, getting closer and closer as they did. They were about to lean in for a kiss, but were interrupted by Raquel who pointed out that Yuki was standing by the frame of the door. Haruka asked her mother if Raquel could stay in the flat, and was met with a yes. She dragged Raquel away so they could both get some sleep.[3]

The following evening, Haruka listened as Naoto asked her questions about Kana. Although she was initially upset he was asking so much about another girl, he made a comment about liking Haruka's hair and her mood was instantly lifted. She also gave information about Kana going behind an alley fairly recently. The next day at school, Haruka stayed behind for Student Council duties.[4]

Tadayuki approached Haruka as she was finishing her duties. He called her attractive and lunged towards her, begging the teenager to call him a "pig" and handing her a whip. Scared, Haruka desperately tried to escape but all the doors were locked. The teacher began to forcefully strip her, and she screamed for Naoto to save her - miraculously, he did, bursting through the door and kicking the teacher in the face. Haruka cried herself to unconscious in Naoto's arms, and he carried her to a nearby bench. Haruka was carried back home by Naoto after he defeated the Apostle his teacher had become.[5]

Haruka was initially against Naoto and Raquel living together in the boy's restored apartment but relented. On the weekend, she spent lunch with the two of them, and spent some time with Naoto. Haruka finally worked up her courage and kissed Naoto before leaving to open the door. At its entrance was Saya.[6]

She let her cousin into the apartment and offered her tea, only to be denied. Noticing that Naoto would want to be left alone with Saya, Haruka dragged Raquel out of the apartment and into her own. She explained the Amanohokosaka Clan to the young vampire and the situation with Saya. Raquel suddenly ran out of the room and Haruka ran after her. After scouring the supermarkets for her, Haruka came back to Naoto's apartment and saw that Saya had left, the living room was messy, and that Raquel was with Naoto.[7]

Haruka was too busy with Student Council duties to spend time with Naoto and Raquel.[8] Days later, she spent time with Naoto and Raquel on the school rooftop to have lunch - the three of them talked about families until Raquel blurted out that Haruka really wanted to be with Naoto. She confessed that she really did, her words constantly speeding up as she talked about the kiss she shared with the boy. Later that evening, she went food shopping with the duo.[9]

When Naoto ended up in a hospital because of Spinner Superior, Haruka visited him, and was told that he was injured by a sinkhole. She softly cried when he awoke, and went back to his apartment to fetch his clothes.[10]