Now in a laboratory, Nu was connected to several cords, including one large one in her eye, each injecting seithr into her body. Scientists meddled with constantly raised the levels during the process of this. Nu's body began to spasm as she came to life, and the scientists declared that their job was complete. They decided on the schedule for her to be delivered to Relius Clover, while discussing how she was made by both him and Sector Seven. However, they were interrupted in their discussions by Hazama, who claimed to have an order from the Imperator to pick Nu up personally.

Hazama asked to see the unit for himself, which the lead scientist agreed to. He took Hazama to the chamber she was contained in. He touched her and marvelled at their work, proclaiming that she truly was the thirteenth unit. However, after the scientist left, he began to mock Nu, demanding she wake up. Her eyelids began to flutter in response to his words.

A young girl who appeared from the "Cauldron" buried deep within Kagutsuchi. Nothing about her appearance suggests who she may be.[1]

When Noel Vermillion came into the presence of the cauldron inside Kagutsuchi, Nu descended from it. She immediately identified Noel as the twelfth unit, the long missing Mu-12. She equipped Murakumo and battled against Noel and her Arcus Diabolus: Bolverk. Eventually, the fight ended with Nu victorious, ready to kill her predecessor; the conclusion was better than she could have hoped for, as Ragna lept in front of the blade meant to kill Noel. Nu, ecstatic that Ragna had finally arrived, began to tell him all about her dreams of seeing him, and ripped her blades out of him. The two battled, and again, Nu emerged victorious. She stabbed him again, and told Ragna about how much she wanted to stay by his side. The pair began to fall into the cauldron, to become a Black Beast, but Noel managed to barely save Ragna with an outstretched hand, and Nu fell into the cauldron to die alone. [2]

Though she had died, there was a small duration where Nu's soul had yet to reach the Azure. Kokonoe snapped up the soul and put it into Lambda-11, Nu's sister unit. Nu's memories were sealed away, but she was able to see Ragna one more time before Lambda herself died. As Nu has a Life Link with Ragna, she began to reconstruct herself in the Boundary shortly afterwards. [3]

Nu-13, who resurrected by her own will in order to fuse with Ragna. Hazama calls her the "Sword of Hades." Rebuilt by Hazama, she once again stands before Ragna.[4]

Hazama and Terumi were given charge over preparing Nu after she rebooted. In the February of 2200AD, Phantom teleported Ragna to her location in the Grave Marker of Bases and the two battled. Nu landed a serious wound on Ragna and Izanami undid the event using Phenomenon Intervention. Ragna was still wounded from the battle even though it had not happened.[5]

Nu later entered the Realm alongside Hazama and Yuuki Terumi. She battled against Noel, who had accepted her identity as Mu-12, leading to the first known clash between the two Lux Sanctus: Murakumo's. Nu's primary objective here was to Observe and synchronize with Noel's status as the Eye of the Azure, being partially successful before retreating.[6] She stood by Hazama and Terumi as they watched over the Battle of Ragna the Bloodedge.[7]

Alongside Relius, Ignis Clover, and Litchi Faye-Ling, Nu made her way to the 8th Hierarchical City of Wadatsumi where she further synchronized with Noel. She was repelled by the Ex Machina: Minerva but had still completed her objective, and returned to Terumi above the Monolith in the 5th Hierarchical City of Ibukido so she could open the gates to the Nemesis Horizon. After doing so and summoning the Amaterasu Unit into the world, Nu merged with the Gigant: Take-Mikazuchi, which Izanami had summoned from its orbit around the planet.[8]

Ragna, Minerva, and Celica found Nu inside the distorted time-space of Take-Mikazuchi. She told Ragna that she had Noel's memories and that both Noel and Hazama were supposed to fuse to become a Black Beast. However, her twisted personality around Ragna came back and the two fought. Nu lost, knocked unconscious by the strength of the Grim Reaper. He then carried her outside of the Nox Nyctores. She woke up soon after and stabbed Ragna; after Ragna's Azure Grimoire went berserk, Nu disappeared.[9]

Nu found Azrael, Litchi Faye-Ling, Kagura Mutsuki, and Iron Tager together in Downtown. Her mission was to retrieve Litchi and fought against her, winning but no succeeding in her mission because of the interference of Tager and Kokonoe, who teleported the group, bar Azrael, away. Nu was left with Azrael but had no will to fight him – Hazama interrupted the two, asking if one was going to propose to the other. [10]

A young girl who appeared from the "Cauldron" buried deep within Kagutsuchi. She is a Boundary Interface Prime Field Device fitted with the Phenomenon Weapon "Lux Sanctus: Murakumo." She has appeared once again in order to fuse with Ragna, but things seem a little different from before.[11]

Cast into the Embryo, Nu's memories were changed so that she believed it was 12/31/2199. She also became one of the chosen. She woke up in Kagutsuchi near the cauldron, being awoken by Noel. Despite being knocked to the floor, she continued her assault, only being stopped by Ragna. [12] She lost to him, something she didn't think possible, but instead of killing her, the Grim Reaper offered to save her, only being unable to as he was teleported away by Nine the Phantom. [13] She was transported to Ikaruga and told by Nine to kill Izanami so she could claim her piece of the Azure and have her wishes come true. Relius had also ordered her to start hunting for the Nox Nyctores' and began with the Arma Reboare: Muchourin, finding Platinum the Trinity but being unable to keep track of her due to the latter's fluctuating existence.[14]

She later found Bang Shishigami, the wielder of the Phoenix: Rettenjo and began fighting him until she was interrupted by Nine. She fought back against both, insanely muttering that the Nox was hers and hers alone; despite this, Bang still managed to flee. [15] While searching for the ninja, she was attacked by Arakune who wanted her Murakumo. She was saved by Relius, who conducted repairs on her, and she allowed it. [16] Nu later followed Izanami into Nine's workshop and nearly assaulted the witch had she not been stopped by Jubei. The two fought until the Corpus Sepulcro: Requiem froze the area in space-time. [17]

When Nu awoke, she was still fighting Jubei, although this time above ground and near the Amaterasu Unit. Intent on destroying it, she fought Jubei and then eventually both Hakumen and Izayoi. She beat the both of them, only being stopped by Ragna, who she revealed to that she had absorbed the core of Gigant: Take-Mikazuchi. When defeated, Nu was knocked unconscious but was forced to awaken by Terumi who sent her insane and broke her soul. Nu lashed out, nearly killing Tsubaki, a blow that was defended by Hakumen – she fought the leader of the Six Heroes, being not only defeated, but knocked unconscious. [18] She was watched over by Tsubaki and Jubei until all three of them dissolved into seithr. 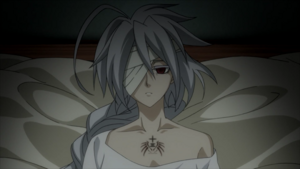 In the new world created by Ragna, Nu was left in a catatonic state. She lived bedridden inside Celica A. Mercury's Church ​with Noel and Lambda as her carers.[19]

As time went on, Nu became closer to Noel and Lambda, eventually referring to them as her sisters. She was able to regain her strength, but decided to leave her old life behind. Nu discarded Murakumo and her Seithr Regulator over her eye. She cut her hair short and even threw away her old name to adopt a new one - Juusan. Her personality shifted as she left behind her salacious and robotic behaviors. Somehow, perhaps because of her merge with it, Juusan gained the ability to summon Take-Mikazuchi at will.

For reasons unknown, Juusan chose to leave the church, but would take cookies made by Lambda. Juusan began searching, although for who is unknown. She began to travel to Phantom Fields within the Boundary, being afforded the ability to do so by virtue of being a Prime Field. Within these Fields, Juusan experienced the world prior to the Dark War, although she found a particular dislike for their dirty air. In time, Juusan found herself within Trinity Glassfille's Phantom Field, which took the form of the Magister's City of Ishana before it was destroyed by Take-Mikazuchi and the Black Beast. Within the Field, Juusan encountered multiple Seithr Beasts that were attracted to her status as a Stranger. Although she found the absence of any presence within the Field eerie, she pressed forward towards the Ishana Cathedral, passing the Grand Clock. As she walked past it, Juusan felt a stir of emotions, although she did not understand why. A security golem soon arose in response to her presence, but Juusan effortlessly beat it.[20][21]

Juusan continued down the Cathedral, eventually finding the cauldron at its heart. There, she saw a shadow of Trinity Glassfille, who had been freed from the Field earlier on. Juusan battled against the shadow to free it from its nightmare as a trapped Observer. As Trinity was freed, Juusan left the Field to continue her search.[22] In the new Phantom Field, implied to be Saya Terumi's Phantom Field, Juusan awoke on a train. A version of Naoto Kurogane was near her; he asked if her sword was real, but Juusan's instincts repeatedly told her to kill him. The fight was short and Juusan ran away, her vision and body giving out. As she ran into a nearby alley, she was attacked by more Seithr Beasts. With no other choice, she killed them with what little energy she had left.[23][24]

Knowing she could not fight the Beasts forever, Juusan ran to the top of a nearby building, managing to escape. She soon lost consciousness and woke up an hour later. A cat came near her and, knowing that it was hungry, Juusan crushed one of Lambda's cookies to give to it. The cat then suddenly fled and Juusan's survival instincts flared into action. Nearby was Clavis Alucard, a version of him back when he was once the No-Life King. Juusan began to call on Take-Mikazuchi but he asked that she refrain. Clavis introduced himself, but the name Alucard only reminded Juusan of her old life as Nu. Clavis asked her a favor: to save a friend of his within a certain Phantom Field.[25]