Formerly belonging to the Magic Guild, being an exemplary mage. Spinner lusted after the Azure and is rumored to have come the closest to it. Because of this, he left Ishanan society, and he set his sights on Raquel Alucard, a vampire who could sense the Azure. He ventured to Shin Kawahama City and created several Apostles in order to help in his goal. Among them was Tadayuki Isa. At some point, he came into contact with the Mitsurugi Agency and Kiiro Hikagami.

During October, Spinner had been tracking Raquel throughout Shin Kawahama, eventually tracked her scent down to an arcade. Putting his hand on a concrete wall, he saw various sorcery runes appear, a message written by Raquel that asked that if the mage could defeat Naoto Kurogane, she would become his. Interested in the invitation, Spinner crushed the bug that had led him to the message, and he licked the wall, gleefully expressing that he would love to lick her directly, and that he will prepare the best insect for her.[1] 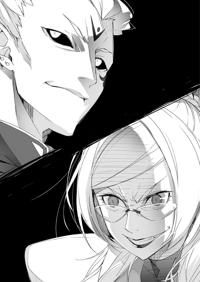 At night in Shin Kawahama First High School, Spinner had tracked Raquel down. He engulfed one of the corridors in pure darkness and effortlessly defeated an entire squadron of Mitsurugi Agency soldiers. He introduced himself to Raquel, calling her 'beautiful' and wishing that there was a full moon he could see her under. The mage asked where Naoto was, ignoring the fact that the student was standing directly in front of him. After Raquel grabbed the boy's arm, Spinner sent him careering into the nearest wall, screaming at him to never touch her again. Summoning another gulf of darkness, he prepared to kill the boy but was interrupted by Kiiro, who cut down his darkness with her Drive.

After calling Kiiro a 'mosaic', the two began to fight. Spinner dodged the majority of her attacks until he was nicked by her Drive. The wound stitched itself together and the two of them exchanged more insults. Upon Raquel's insistence, Spinner left, agreeing that he had only arrived to greet Raquel, and not to kill Kiiro. The mage disappeared as quickly as he had arrived.[2]

Later that same week, Spinner arrived an apartment complex and found one of his bugs cut into tiny pieces. After complimenting the cleanness of the cuts, he noticed that the Soul Eater Drive had been used as well, and gleefully exclaimed that the Azure must be calling to him for such a thing to happen.[3]

Spinner later sensed a battle between the Soul Eater user, Saya Terumi, and Valkenhayn R. Hellsing, a lycanthrope belonging to the Immortal Breakers. He kidnapped Saya, took her to the top of a building complex, and looked back at the crowd he had kidnapped her from - the people within it being Raquel, Naoto, Valkenhayn, and Relius Clover.[4] 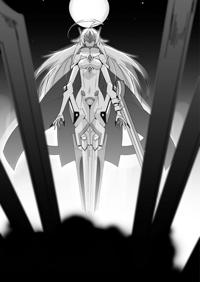 Spinner then created numerous sorcery circles to amplify his own power and had encased Saya within a massive bug, taking over Soul Eater and using it to absorb the souls of everyone around the building he had arrived on. Naoto and Raquel caught up to him, and learned of his plan for Soul Eater and the fusion of himself with Raquel.

Naoto attempted to fight Spinner, but the mage just let his giant bug do the fighting for him while he mocked Raquel. Spinner told the duo that the bug was designed explicitly to fight Clavis Alucard, hence its incredible strength, speed, and ability to damage the soul. To his shock, the duo defeated his bug and freed Saya, but Spinner used his power over darkness to absorb Raquel during the confusion. Together they formed a grotesque creature - Spinner's torso being the upper-half, and the lower-half being that of a massive spider. Spinner opened up a gate to the Boundary and had nearly obtained his goal of getting to the Azure, but Naoto had activated his Drive, Bloodedge, and cut Spinner down. Raquel was torn out of the fusion by the boy and Spinner was left on his deathbed.

The circle he had created earlier had forced him too close to the Boundary and the mage's body began to rapidly mutate without Raquel within him to maintain his connection. He unleashed a bloodcurdling scream, begging for the Azure. Although he was losing his recognition, he unleashed more bugs until Kiiro arrived and finally killed him with her Drive. The remainder of Spinner's corpse was dragged into the gate to the Boundary.[5]