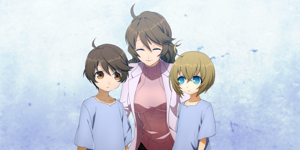 Touya, Ryouko, and the Embryo.

Ryouko had a career with the Takamagahara Organization, where she was put in charge as the project head of a new venture to stream seithr from the Boundary. By doing this and controlling the flow, they hoped to create a limitless source of energy. Unfortunately, Ryouko's son, Touya Kagari developed a crystal, becoming a Drive-Union. During her time here, Ryouko became close to Sui Amanohokosaka, the shrine maiden of the Amanohokosaka Clan.

The Takamagahara Organization partnered with the Magic Guild and used the Wadatsumi Research Facility in Shin Yokozaki City as their main laboratory because of its native cauldron. The organization discovered a young girl who possessed an Embryo and transferred her to the facility. The goals of the research changed to create the T-System, which could prevent crime through Phenomenon Intervention. Touya was already being kept in the facility because of his condition. Ryouko looked after them both, encouraging their friendship to blossom.[1] Touya and the young girl ran away, and Touya, aged 6, eventually died after using his Drive to protect her. The girl was brought back to the facility.

After the death of her only son, Ryouko worked with Sui to sabotage the Takamagahara Organization and their goals of creating the T-System with the Embryo. The Ten Sages opened the cauldron prematurely on the day of the experiment and the Origin of the Grimoire went berserk.[2] Ryouko's sabotaging of the facilities systems had managed to limit a great deal of the damage from the Grimoire. The Embryo settled the Grimoire and recreated it in Touya's image. Her reborn son was one of the last images that Ryouko saw before she was killed by the extreme amounts of seithr in the area.

Ryouko's legacy was tarnished by her fellow scientist Souichiro Unomaru. He fabricated information that implicated her as the main perpetrator of the event, which took 3000 lives and was later known as the Wadatsumi Incident.