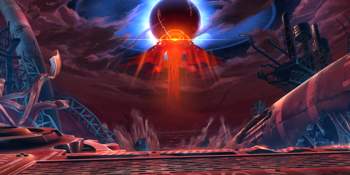 The destruction of the world

Doomsday (, Horobi), also known as The Day of Reckoning, was an event that began in February 2200AD. The event was heralded by Izanami as she attempted to end the world by forcing the Amaterasu Unit to reset it. The event successfully happened, but Izanami's plan to kill The Origin before the world would reset was thwarted.

Doomsday is a ritual that involves the deaths of every living creature and returning their souls to the Azure, deep in the Boundary. Once this is completed, the next step is forcing the Amaterasu Unit to reset the world and making the Successor of the Azure rebuild the world as they see fit. Originally, the Takamagahara System were going to make this ritual occur, but Izanami and Yuuki Terumi seized control of the system.

Prior to the beginning of Doomsday, Kushinada's Lynchpin had been activated and stopped the flow of seithr across the world. A Monolith had also been activated in the middle of the 5th Hierarchical City of Ibukido, killing countless civilians. Nu-13 and Hazama forced the Nemesis Horizon to not only appear, but open its gates and allow the Amaterasu Unit to descend from the Boundary and into the real world.[1]

Despite the clarity of the ritual, many things went awry during the process. Several people became the Chosen, those qualified to make their wishes part of the new world, and were transported into the Embryo as the real world perished; the Chosen were given a goal to obtain the Azure in order to make their dreams reality.[2] As well as this, Izanami planned to kill The Origin and Noel Vermillion before the world could reset, therefore destroying everything in existence since no one would be able to rebuild the world. During this time, Ragna the Bloodedge took the wishes of the Chosen using Soul Eater.

In the final stages of Doomsday, many Chosen turned into seithr, returning back to the Azure. The Azure itself chose Es to make backups of those Chosen so that they could be reborn in the new world. The Embryo itself also began to collapse in the final stages, showing the outside world had become the White of Nothingness (, Kyomu no Shiro), a vast scenery of pure white where nothing exists.[3]

Susano'o and Ragna battled for the Azure, and the latter won. He ended the ritual of Doomsday by entering Amaterasu and rebuilt the world using the wishes of the Chosen and the Azure, creating a world near identical to the one that existed prior to the beginning of Doomsday.[4]

Doomsday (The Day of Reckoning)

It was originally a phenomenon the Takamagahara System was trying to cause, but with the system seized by the Imperator, she and Terumi caused it.

'Doomsday' originally referred to the ritual of returning the lives and souls of all humans to their source, 'Azure', 'resetting' the world, then allowing the 'Successor of the Azure' to rebuild it. However, those deemed as 'qualified' by the Azure have been left in the world.[5]

The scenery altered by the Day of Reckoning. A white world with nothing, as far as the eye can see.[6]