Clavis came into existence when a man touched a portion of the Azure, and used it to create the vampire. Because of this, despite his strengths and identity, Clavis is an Illusionary Creature; his entire existence is like that of a Drive. He eventually clashed with the Soul Eater Drive, dedicating most of his time to taking it out. At some point, he arrived in Shin Kawahama City and battled against the user. In order to kill the user, he had to sacrifice 12,8932 people, causing the Mass-Disappearing Incident. Out of this, an Embryo was created.

In time, the Embryo became Raquel Alucard, and Clavis took her in as his own child, naming her and giving her a formal education in the space of a few months. Afterwards he directly connected her to the Boundary and streamed information into her mind. Raquel eventually left for Shin Kawahama, and Clavis followed for his daughter. Because of the Incident, Clavis was now being tracked by the Mitsurugi Agency and the Immortal Breakers.

The vampire tracked his daughter to the city and found that she was living in an apartment block owned by Yuki Hayami. He entered one of the apartments and met Haruka Hayami. She made him tea, which he thoroughly enjoyed, and used sorcery to put her to sleep in one of the rooms. Raquel, and her servant Naoto Kurogane, came back to the apartment as Clavis sat on the sofa.[1]

Clavis asked Naoto if it was alright for him to take Raquel back to the Alucard Castle, sternly telling his daughter that the question was not for her. He asked her if she would come back, also telling her to watch her language when speaking to her father. Clavis the grabbed the boy's right arm, briefly marvelled at it and then unattached it. He made the arm stronger and used new sorcery on it before reattaching it. Confident that Raquel was with the right kind of servant, he relinquished on asking her to return, and then apologized as it would get noisy. He promised to protect the kitchen and sofa as thanks for the tea.

Valkenhayn R. Hellsing burst through the doors of the apartment and attacked Clavis, but the vampire effortlessly threw him out of the entrance. Marionette arms then rose out of the floor as Relius Clover also attacked but Clavis effortlessly and cleanly cut them down. Valkenhayn, now in his wolf form, lunged at the vampire and sunk his teeth into his arm. Clavis looked at him and remarked how long it had been since he had seen a lycanthrope. He calmly walked to the nearest window and threw Valkenhayn out of it, following after him and apologizing for the state of the apartment.[2]

In one of Shin Kawahama's supermarkets, Clavis used Phenomenon Intervention to freeze time for himself and Naoto. He greeted the teenager and told him that he wished to speak with him in peace and quiet without interference. He asked Naoto why Raquel chose him, but was met with the answer that he should ask his daughter. The vampire laughed to himself, remarking that if it was only that easy for all parents to interact with their children. Clavis then asked what Naoto's would do with the Azure, hearing that he wanted to become human again. Naoto asked the vampire if he had truly caused the Mass-Disappearing Incident, and Clavis bluntly began to tell him the truth.

Using Phenomenon Intervention, Clavis changed the scenery, showing Naoto what had happened 5 years prior in his battle against the Soul Eater wielder. He then explained his wish to obtain the Azure and to erase both monsters and Drives from the world, even if it meant he would be in more pain and would no longer be himself. He also explained Raquel's origins and unfroze time for the boy, leaving and telling him that they would eventually clash for the Azure itself.[3]

Clavis reappeared to block an attack from Kiiro Hikagami that was aimed to kill Raquel. He turned to her and told her to retreat, as he did not want to kill her. Kiiro, with some persuasion, left after realizing that she could not fight him by herself.[4]

It is unknown when this war took place, but Clavis was a known participant as he fought on humanity's side. He urged them to create the Sealed Weapon Izayoi and the Zero-Type Izayoi, two weapons that could be used to defeat The Origin. As with the rest of the world, he was taken into the reconstructed world created by The Origin.[5] 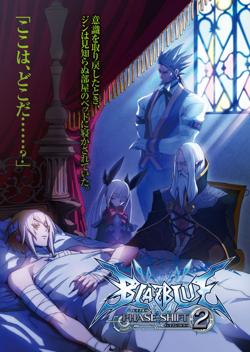 Years afterwards inside The Origin's dream, Clavis' appearance had vastly changed. He had become old and bound to a wheelchair. At some point he saved Valkenhayn from death and the wolf swore his loyalty. The circumstances are unknown, but Raquel seemed to no longer exist, and Clavis was instead the father of Rachel Alucard. At the beginning of the Dark War and the appearance of the Black Beast, Clavis tracked the monster's beginning back to Relius.[6] Valkenhayn notified him of the decision by the United Nations to launch a nuclear strike on Japan, and the elderly vampire was left questioning on how their decision would impact the future.[7] He quickly deployed Mitsuyoshi to find and capture Shuichiro Ayatsuki, one of the scientists responsible for the release of the Black Beast.

It was around this time that Rachel brought back a stranger on death's bed back to the castle - Jin Kisaragi, who had been displaced from his time period by exactly a century. Clavis gave the man a bed to stay in while Valkenhayn tended to his wounds; when Jin woke, he was told by Clavis about the Dark War, the Boundary, the Alucard Castle, and even the state of his memories. A short while later, they left Jin to rest as his wounds were seriously grievous. Clavis remarked that the man's future had yet to conclude.[8]

Jin had later recovered from his exterior wounds, but his body was paralyzed from the waste down. Clavis, along with Valkenhayn and Rachel, took the young man deep into the Alucard Castle's basement hallways. The elder vampire undid each sorcery seal on the doors, guiding the group deeper in. He inquired about Jin's missing memories, learning that he had recovered some about Tsubaki Yayoi and Ragna the Bloodedge. Jin was told that the future was already determined, and Clavis watched as the young man vocally vented his frustration at the fates of those he loved. The vampire continued, explaining about the three Sankishin before revealing what was in the final door - the Susano'o Unit. Clavis offered the Unit to Jin before retiring to his quarters, asking the young man to live true to his heart. Jin later took the Susano'o Unit and became Hakumen.[9]

Clavis hired Tomonori, a beastkin, to observe Kazuma Kval, a mage who was made by Relius to be the vessel for Yuuki Terumi. Rachel brought Tomonori back to the Alucard Castle to speak with Clavis and the elderly vampire reprimanded him for making an attempt on Kazuma's life. Although Tomonori's words were cutting, Clavis only responded with warmth and compared him to Mitsuyoshi. When the beastkin left, the vampire contemplated his place watching humanity and drank tea that was prepared by Valkenhayn.[10] 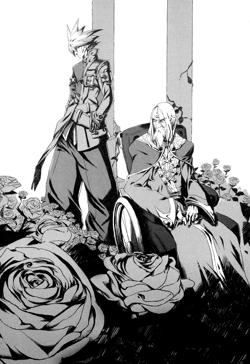 After discovering that Tomonori was going to kill Kazuma with the Hihiirokane, Clavis sent Valkenhayn after him, but his servant was too late - Terumi and Kazuma had fused and Tomonori was found dead in a puddle of blood. Together, Clavis and Valkenhayn created a special prison within the castle and bound Terumi within it since the servant had managed to knock him unconscious. They could not kill Kazuma since Terumi would only escape to a new host, and so Clavis bound him using sorcery. They left the prison, both master and servant expressing a deep regret over Tomonori's death.[11]

Some time later, Rachel brought three guests back the Alucard Castle - Ragna, Celica A. Mercury, and Mitsuyoshi. Mitsuyoshi was taken into the inner sanctum of the Castle to receive treatment for serious wounds he sustained against a Remnant of the Black Beast. Clavis soon entered the parlor with his daughter and Valkenhayn, meeting Celica and Ragna. He introduced himself and then began to explain to them about the reason why he deployed Mitsuyoshi to pursue Shuichiro, knowing that Celica is the youngest daughter of the scientist. After having stated his reasons, he left them to rest for the evening, retiring himself to the gardens.

In the Castle's rose gardens, Clavis saw Rachel and Ragna fighting, and dismissed his daughter so he could speak with the Grim Reaper. He listened calmly to the man's confusion, having been sent to the era of the Dark War from the year 2200. Clavis did his best to understand the situation, and was intrigued to learn that Rachel would become an interesting woman in the future. He told him to live true to his heart so he could understand the path ahead and find the truth in front of him. Clavis gave Celica and Ragna a map to the First District before sending them back to Japan.[12]

Shortly after sending Ragna and Celica to the Kantō region of Japan, Clavis passed away and Rachel assumed the position as the head of the Alucard Clan. Valkenhayn's loyalty extended to Rachel and he became her servant just as he had been for Clavis.[13]