An outstanding mage serving as the seventh of the Ten Sages, and the head of the "Kisaragi Family" during the Dark War. An intelligent, glasses-wearing young man.[1]

Seven was the head of the Magister's City of Ishana's Kisaragi family. He was accepted into the Ten Sages at a relatively early age, becoming associates with Eight. At some point, he and Eight began working on the Gigant: Take-Mikazuchi, a weapon that could repel the Black Beast and end the Dark War. Nine built the foundations of the weapon, while both Seven and Eight continued its development. 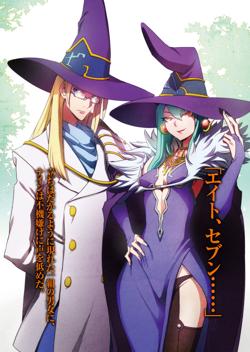 Seven was one of the Ten Sages who were ordered to help patch the barrier in the Magister's City of Ishana in 2106.[2]He, alongside his fellow Sages fulfilled this duty. Earlier that same month, he bore witness to the acceptance of Nine into the Sage's ranks.[3]

Seven, alongside Eight, stood in the Mage's Guild a year after Nine's acceptance. The two of them scorned Nine for bringing Jubei, Valkenhayn R. Hellsing, Yuuki Terumi, and Hakumen into the hallowed halls. Celica A. Mercury, who was also present, attempted to leave but Seven grabbed her arm, demanding that she stay with Nine for the conversation. The uninvited guests, as well as Trinity Glassfille, eventually left, leaving Seven and Eight with Nine and Celica. They asked the younger sister if she would cooperate with a device that could stop the Beast, but Nine abruptly stopped them, her glare alone making the two Sages wince. They both attempted to persuade Nine and Celica, but the older of the sisters was not willing to listen and dragged Celica away from them. She demanded that they both dismantle Take-Mikazuchi as soon as possible.

Left together in the courtyard, the two Sages began to mull over their options. Seven remained adamant in his decision to want Celica to keep the monster from going berserk. The two were then met by Kazuma Kval who acted under the guise of Terumi.[4]

Together with Eight, Seven found Celica at a junction near Ishana's shopping district. They asked for a moment of her time and Seven bluntly asked that she cooperate with their research before capturing a glimpse of the girl's guardian - the Deus Machina: Nirvana. Celica refused, telling them that she knew she would die if she cooperated. Still, they were refused and the girl bounded cheerfully away. From a nearby alley, Seven ordered several figures from the Orbis Librarius Norma to monitor Celica, remarking that she was the girl in Shuichiro Ayatsuki's research. Eight went to leave, and as she was out of earshot, Seven remarked on her disdainful personality.[5]

Both Seven and Eight were part of the battalion that were sent to Eastern Europe in the hopes of meeting and defeating the Black Beast. Together, they teleported Take-Mikazuchi to the battlefield, using Celica's sorcery to keep the monster from going berserk after teleporting her to their location. They swiftly left after the weapon did enough damage to cause the Beast to flee. It was humanity's first victory, but Celica was sent unconscious by their decision to use her power without her consent.[6]

Both Seven and Eight came back to the Ishana Cathedral after having witnessed the retreat of the Black Beast. Seven reminded Eight to not be so loud in her celebrations but struggled to hide his glee at such a success. Their happiness was short-lived as Kazuma appeared in the shadows - Seven listened to his praises yet both Sages remained on guard whenever the man appeared in front of them. A short time later, both Seven and Eight had received orders from the Committee of Hearing to detain Nine and bring her to them. They apprehended her with binding sorcery from other mages under their command, separating her from the other Six Heroes in the Cathedral.[7] 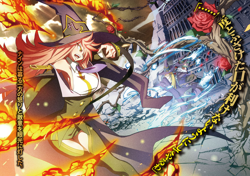 Battle of the Ten Sages.

Seven watched with some satisfaction as all of Nine's jurisdiction concerning the Dark War was stripped away from her. However, when she broke free of her restraints, Seven was the first in her line of fire. The two Sages battled outside of the assembly hall – Nine threw several spears at his direction, but Seven blocked them with a film of water before transforming it into a watery , serpentine dragon that lunged towards his fellow Sage. Nine destroyed it with her own power; Seven could not help but remark on her strength and watched as Eight followed up with her own spells before being dispatched by Nine's magical wrath. Seven did not stop his assault and bound Nine with several watery ropes before launching a blunt force of water against his opponent. Instead of this landing, Nine retaliated with an invisible blast that sent Seven hurtling back into the assembly hall – he cushioned his landing with a film of water before rising up and calling Nine a monster.

The battle was interrupted by the arrival of Hakumen, Jubei, Terumi, Nirvana, Valkenhayn, Trinity, and Celica. The group, however, took Nine and retreated as OLN soldiers and other members of the Ten Sages came to reinforce Seven and Eight during the struggle. Seven and Eight gave chase but lost the group in Ishana's streets. By the time they found them, it was too late as they had teleported to a location away from Ishana.

Eight roused herself into a temper, but Seven coldly demanded her silence. He reminded her that they gathered valuable data from the battle against the Black Beast five days earlier, and that they would no longer need Celica and would just need to replace her. Seven resigned himself to finding a solution, taking the OLN soldiers with him and leaving Eight behind.[8] The new plan involved using the lives of tens of thousands of people gathered in a small village in Asia. There, they would be used to summon Take-Mikazuchi and fight against the Black Beast.[9]

The plan to sacrifice the people was going smoothly. Together with Eight, Seven set up a simple barrier around the village where the people were gathered, trapping them inside. The Black Beast began to rise, its gradual appearance punctuated by the screams of the people trapped with it. Seeing it beginning to appear, the two Sages began to prepare to summon Take-Mikazuchi.

Take-Mikazuchi appeared and began to aim towards the Beast. Something was wrong, however, as the Beast quickly disappeared and reappeared next to the Nox. It bit down hard onto it, trying to rip its head off. Panicking, both Seven and Eight tried to send Take-Mikazuchi back into its summoning circle, but they were interrupted by the sudden appearance of Nine and Jubei. Jubei took a swing at the Sage, but he dodged it by hiding within a curtain of water. The plan to fight the Beast failed, as it was taken inside Take-Mikazuchi's summoning circle. It teleported both creatures into Ishana, making the Beast aware of its existence. The plan did not just fail, it backfired terrifically, and Seven disappeared.[10]

Seven managed to return to Ishana the following day. There, he was summoned before a committee of executives alongside Eight and Nine. They were ordered to explain what had happened within the Asian village that had allowed for the catastrophe within Ishana. Seven bit his tongue as both Eight and Nine argued over what had happened; he intervened as Eight became visibly angry, demanding that she stay silent. Nine continued, telling everyone that the Beast would now be on its way to Ishana.

When the meeting ended, Seven caught Nine telling Valkenhayn, Jubei, and Celica that she believed that the Mage's Guild and Duodecim was going to merge with the OLN. As an esteemed member of the first two organizations, Seven made it clear to her that he had no intention of selling Ishana. Nine bit back, but before either could fight more, they were stopped by Three, who had trailed behind them with Four and Eight. She reminded them of their position within Ishana and that they should not argue in the streets.[11]

Some time later, Seven was gifted a weapon by Nine: the Nox Nyctores – Mucro Algesco: Yukianesa, a powerful weapon which complimented his preference for water sorcery.[12] In a meeting later held by Nine that explained the last fight against the Black Beast, Seven learned that he and the other Ten Sages would have to teleport the Beast above a cave filled with crystals of Order. These crystals neutralize seithr, meaning the Beast would be severely weakened. Valkenhayn would be giving the order on when the teleportation would be completed. On December 31st, 2109, the Black Beast finally appeared and headed towards Ishana. Seven and the other Ten Sages worked hard, creating a massive teleportation circle that the Black Beast was baited into. Using Yukianesa, Seven was able to fight against the seithr thrown by the Beast by making a massive ice dragon. At the same time, he transferred his magic into the circle, allowing the Beast to eventually be teleported above the cave filled with crystals of Order. Soon afterwards, the Black Beast was finally killed and the Dark War ended. [13]

One month later, Seven invited Eight to a manor owned by the Kisaragi household. He poured her tea and placed Yukianesa on the table. She gasped and he asked her to keep it in her possession. He revealed to her that Three was missing and that he needed Eight to keep Yukianesa out of sight so that once the post-war scramble had settled, they would be able to analyze the weapon and keep it. As she grabbed its sheathe, the entire room froze. Seven spoke to the frozen statue, telling her the lie that he would tell the world: she had stolen Yukianesa and disappeared. She would never be found, and once the world had forgotten about it, Yukianesa would mysteriously return back to the Kisaragi family. As Seven finished his sentence, he took Yukianesa from her frozen hands and slashed at her, killing Eight as her frozen corpse crumbled to the floor in pieces. [14]