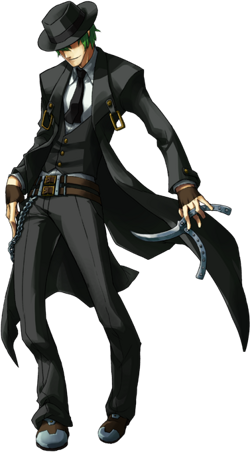 Terumi would utilize this Grimoire to best Ragna the Bloodedge throughout the Continuum Shift created by Noel Vermillion. Ultimately, Lambda-11 sacrificed herself to take a fatal blow aimed at Ragna, and then gave her Idea Engine to him before passing away. The Idea Engine changed the composition of the Azure Grimoire and allowed Ragna to defeat Terumi shortly afterwards despite the initial advantage that the Blue Grimoire had given him.[2] Later on, Hazama and Terumi used the Grimoire against Ragna again, but the presence of Celica A. Mercury made Hazama sick and the battle was abandoned.[3] The reason why Hazama cannot stand to be in her presence is because of Celica's ability to nullify and purify the seithr around her - as a Blue Grimoire is literally a cauldron and needs seithr to function, Hazama would feel sick as a result.

During the Dark War, a man called Kazuma Kval was likely a Blue Grimoire. Kazuma was created by Relius Clover, so it is unlikely that Kazuma is a Blue Grimoire in the same sense as Hazama, but they exhibited the same strengths and weaknesses that are caused by being one. Kazuma would also get sick in the presence of Celica A. Mercury.[4]

A Grimoire possessed by Hazama. It has the ability to neutralize the power of Ragna's 'Azure Grimoire.'[5]

One of the spells necessary for Ragna and Hazama to utilize their BlazBlue. Details are unknown.[6]

One of the spells necessary for Ragna and Hazama to utilize their BlazBlue. Details are unknown.[7]