Kiiro was made with the parts of the other six Dimensional Boundary Contact Prime Field Es units that had been murdered by Spinner Superior. She was employed then by the Mitsurugi Agency. After the Mass-Disappearing Incident, Kiiro was put in charge of the Immortal Breakers Valkenhayn R. Hellsing and Relius Clover, and the three of them pursued Clavis Alucard.

Kiiro first appears when she entered Naoto's apartment which had been destroyed in a fight involving Clavis, Valkenhayn, and Relius. She came to greet Naoto and apologize for the mess that Relius and Valkenhayn had created. Before she did so, she whispered in Raquel's ear that she wanted to dissect her but would relent for Naoto's sake. Kiiro told Naoto that she wanted to start a relationship with him, that she was aiming to exterminate Clavis, and the goal of the Mitsurugi Agency in maintaining world peace. 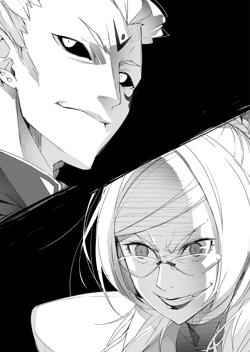 She offered Naoto a place to stay in a hotel but was rejected when she wouldn't reveal if she would be staying there as well. Before she left, Kiiro asked Naoto what his Drive is but he was confused at the question.[1]

A few days later in the dead of night, Kiiro and a squad of Sleipnir agents arrived at Shin Kawahama First High School. There, they recovered the defeated body of Tadayuki Isa. Kiiro approached Naoto and explained to him that they would save his teacher's life by extracting the bug that was making him an Apostle and that they would keep the recordings that the Apostle made of him and Kana Kirishima.

As she was about to leave, Spinner arrived for Raquel. He was about to deal a deadly blow to Naoto but Kiiro intervened, cutting down the attack with her Drive. He called her a "mosaic" and Kiiro exploded with rage, launching a wild fury of Drive attacks until she finally scored a hit on the mage's body. She screamed that she would kill him right where he stood. Raquel diffused the situation and Spinner left. Kiiro began to walk home, clenching her fists and crying.[2] 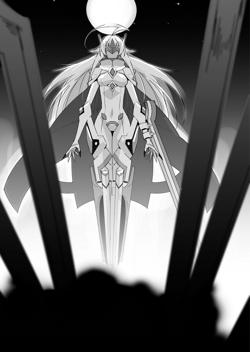 Kiiro spent her time being tuned by the Agency a few days after the incident with Spinner. Most of Spinner's Apostles were also being hunted down with fervor, with the assailant implied to be Kiiro.[3]

Relius and Valkenhayn broke down a sorcery circle that was amplifying the power that Spinner was employing in his battle against Raquel and Naoto. Kiiro finally arrived at the last second with her Murakumo to strike down Spinner, who had been corrupted by the Boundary. As she descended to the battle, she struck the mage down multiple times with her blades.

She rushed to Naoto's side and cried as she held his hand. The battle with Spinner had severely maimed the boy. She turned to Raquel and blamed her for everything that had happened. In her anger, she readied her Drive and Murakumo once more and threw her attack. It was blocked by Clavis, who calmly told Kiiro to retreat if she didn't wish to die. Understanding that she stood little chance, Kiiro backed off.[4]

Kiiro later visited Naoto in hospital. She wore a large coat and after explaining the source of his new limbs, she took it off, revealing that she was naked underneath. She asked the teenager to look and revealed her origins to him. She then extended an invitation to him to join the Mitsurugi Agency, but upon the rejection, remarked that the two of them would be enemies as they both pursued the Azure.[5]