A Prime Field Device (素体, Sotai) is an umbrella name for a series of artificial humans created by humans themselves for a number of reasons. Their original goal was the exploration of the Boundary, but this has gradually changed over time.

The first of the Prime Field Devices were created by scientists after the discovery of the Susano'o Unit in the First District. In order to further explore the Boundary from which Susano'o originated, they created a series of artificial humans to explore it, as humans themselves were unable to withstand the nature of the Boundary itself. The first of these Prime Fields discovered the Amaterasu Unit deep within the Boundary, and became the first Eye of the Azure. Each Prime Field that ventured into the Boundary gained a soul, becoming their own person.

Because Prime Field Devices have souls, it is possible for them to acquire a Drive. 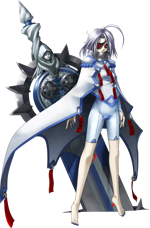 The Prime Field Devices most often seen in the series. The first of these Prime Field Devices was said to be created by Relius Clover. Only thirteen of them exist, and the last three were based on Saya, a girl who had the ability to almost infinitely amplify seithr. Mu-12 and Nu-13 both wielded a Lux Sanctus: Murakumo, a Nox Nyctores of which two exist.

These Prime Fields are so close to being human that it is difficult to tell them apart from ordinary people. Noel Vermillion spent most of her life without realizing that she was a Prime Field, and her friends were none the wiser. The models based on Saya have an incredible Ars Magus aptitude, but most importantly, all three possess a piece of The Origin's soul. However, this does not make them carbon copies of one another, as they all have distinct personalities and experiences.

Only one of these models is currently known: the body of Platinum the Trinity. They are programmed with the ability to activate a defensive personality that prioritizes preventing the body from falling into the wrong hands; in the case of Platinum's body, the personality was Bell.[2] They also possess a mechanism called the LunaSena System, which allows for the complete control of a Nox Nyctores if the body is used for the smelting of one. Only the test model of this variation has been shown. 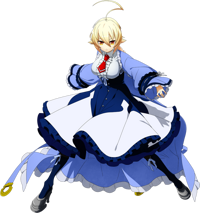 Also known simply as Embryo Storage, or Es for short. These Prime Fields were designed by Souichiro Unomaru, a scientist for the Mitsurugi Agency. They are designed specifically to store an Embryo, a crystallization of the Azure. Unlike the other Prime Fields, Embryo Storages are closer to machines than they are to humans, requiring weekly maintenance and power cores and having programmable personalities. Owing to their mechanics, they also have inbuilt sensors that allow them to track Discover Calls, a unique sound emitted by a Drive-Union. It is possible to power an Embryo Storage using the Crystal from a Drive-Union, but this is seen as morally wrong. [3]

Despite being more mechanical than their counterparts, they also experience pain, hunger, and even love, but this seems to only be present in the base model Es.

Later versions known as Embryo Storage-Nu, or Es-N, are the most mechanical of all Prime Fields. Their primary weapon is formed from blood acquired from Mei Amanohokosaka, and they follow orders from Souichiro without question.

Like other Prime Fields, Es is capable of wielding powerful weapons, such as the Legacy Weapon - Signati Gladio Crystalis: Murakumo. The base model of Es disappeared when she was reincarnated as a human by Nine the Phantom, but she appears again as an Embryo Storage in BlazBlue: Central Fiction for unknown reasons.

These Prime Fields were created prior to the Dark War. Kiiro Hikagami is the last of her kind, being the seventh in the series, and created from the pieces of her predecessors. Some of the Contact Prime Fields were destroyed by Spinner Superior and devoured by his bugs.[4]

Other Prime Field Devices that currently do not fall into any categories of variations.