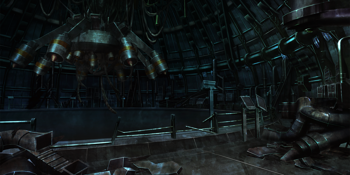 The First District, also known as the First Area, was a laboratory in Kantō, Japan, famous for being the first place where the Black Beast rose. Over the period of 100 years, this place has become the laboratory for Nine the Phantom and then eventually the foundation on which Sector Seven's headquarters were built upon.

In an unknown time, the Susano'o Unit was excavated from this area in Japan, which made humanity continue their digging. They eventually came across the first documented cauldron, leading to a large amount of scientific research in the area. These discoveries lead to humanity also finding the Boundary. This building was built and maintained through a combination of magic and science, being a primitive predecessor to Ars Magus.[1]

In 2099AD, scientists Shuichiro Ayatsuki and Relius Clover attempted to develop the first Kusanagi in the First District with the backing of Yuuki Terumi. Fearing for their failure, Shuichiro secretly created the Kushinada's Lynchpin and secured it here should their experiment with the Kusanagi fail. The experiment was a failure, and a Black Beast appeared from the cauldron, although its appearance was unrelated to the experiment itself - the area was later bombarded with nuclear weapons by the United Nations.[2]

At some point, the area had minor repairs by visitors. It was visited by Ragna the Bloodedge, Celica A. Mercury, Nine the Phantom, Trinity Glassfille, and Jubei while they were searching for Shuichiro in 2106AD. They discovered the Lynchpin and Shuichiro, who had been left alive by the seithr in the air neutralizing the radiation and the cauldron distorting time to have passed much slower within the area. The district was subject to another visit from the Black Beast, and it was here that it was stalled for one year by Ragna.[3]

When the Dark War ended, Nine revisited the District and moved her laboratory into a space between it and the Boundary with Jubei having used the Mucro Somnio: Musashi to do so. A lock was created that required alchemy and the blood of a Mercury to open, leaving it sealed shut with the 11th Nox Nyctores - Corpus Sepulcro: Requiem hidden within. Kokonoe later had the Sector Seven headquarters built upon the First District, doing so for two reasons: to seal away her mother's laboratory, and to use the cauldron as a source of power for the organization's headquarters.[4]

The First District was notably ahead of its time, using magic to operate its elevators and to lengthen the durability of the building. The lower levels had been largely damaged by the Black Beast, with the soil at the lowest level being made visible from the metal sheets that had been torn apart. Doors had electric locks and one laboratory in particular had projectors and computers with details on Kushinada's Lynchpin. Clavis Alucard possessed a map of the area.[5]

The 'land of origin' located within Japan. The Susano'o Unit and Cauldron were discovered here, and it's also the place where the 'Black Beast' first appeared.[6]