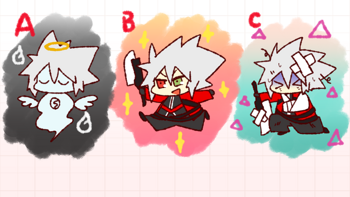 An example of Phenomenon Intervention on Ragna

Phenomenon Intervention (事象干渉 Jishō Kanshō) is an ability possessed by Observers that allows them to alter one possibility into another.

Observers, and by extension Onlookers, have the ability to manipulate phenomena as they see fit.

There are multiple realities, and Observers can overwrite certain realities with others within reason. In the BlazBlue: Continuum Shift recap in BlazBlue: Chrono Phantasma Extend's Anthology, an example is given with Ragna the Bloodedge. If Ragna dies in reality 'A', then it is overwritten with reality 'B', where he does not, then a Phenomenon Intervention has occurred. There are an infinite amount of possibilities, such as the one where Ragna did not die, but is injured. Only the Takamagahara System and Amaterasu Unit are capable of overwriting major phenomenon such as this.[1]

The act of 'intervening' on existences and phenomena (events). It refers to one with a 'will' Observing phenomena.[6]

Referred to as "The Power of God." A phenomenon that is predicates on an individual's "proof of existence." It allows one to re-write discreet pieces of a target's past actions in order to influence the reality of the present. However, if it cannot be determined if an individual actually "exists" or not, performing a phenomenon intervention becomes very difficult, of not impossible.[7]