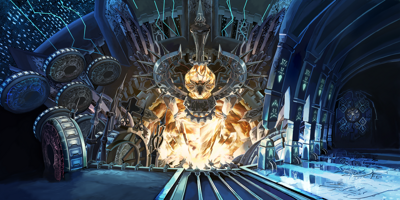 The cauldron beneath the 13th Hierarchical City of Kagutsuchi

A Cauldron ( Kama), also known as a Sheol Gate (シェオルの門 Sheoru no Mon), Hell Spring, and Gate of Judgement, is an entrance to the Boundary itself. They exist all across the world and are mainly located deep underground, while one exists in the sky - the Nemesis Horizon. Seithr endlessly spews into the world from the cauldrons.

Cauldrons have existed before recorded history. The Azure Shrine Maiden was the first known person to interact with one, accidentally summoning a Black Beast into the world. She brought it back through the cauldron, and her descendants, the Amanohokosaka Clan, guarded that land for millennia.[1]It was eventually named Wadatsumi, and the land was sold to the Takamagahara Organization, who used the cauldron within to create an infinite power source from the seithr. When the Wadatsumi Incident occurred, it was shut down. A cauldron also exists in the First District, and was place where the Dark War begun.[2]

Each Hierarchical City is built above a cauldron, with the Novus Orbis Librarium branch having a direct Ars Magus elevator to the cauldron's foyer. The cauldron quite literally fuels the Hierarchical City with its endless reserves of seithr. Relius Clover enacted a plan to activate every cauldron across the world to prepare for Doomsday, and was successful in his venture.[3] Lotte Carmine was obsessed with the Boundary, and was lured into a cauldron by Yuuki Terumi, creating Arakune and sealing Lotte's soul deep within the dimension.[4]

Ragna the Bloodedge made it his goal to destroy each cauldron, which brought ruin to the afflicted Hierarchical Cities. The 9th Hierarchical City of Akitsu-Kou is buried in snow because of its cauldron's death. According to Relius, cauldrons are essentially living beings, and they can only be killed by those who wield a piece of the Azure, such as the Azure Grimoire. Order is ineffective at killing a cauldron, but it is capable of destroying one.[5]

As the cauldrons connect directly to the Boundary, seithr endlessly spews out of it into the world. They also act as gateways to the dimension, meaning that people can be sent backwards and forwards in time and space, and be moved between timelines thanks to the Boundary's interconnecting nature.[6] Simply being near a cauldron is enough to stimulate the memories of those near it, regardless of the trauma that caused the amnesia.[7] One purpose of a cauldron is to smelt weapons and artificial humans. Thousands of souls are needed for this, and a Monolith can fulfil the same purpose by being connected to a cauldron.

There are several different types of cauldrons. Asides from the conventional ones deep underground, the Nemesis Horizon is hidden deep in the sky, while the Azure Grimoire is essentially a miniature cauldron thanks to it being able to directly connect to the Boundary.[8] A Black Beast is also a cauldron for the same reason. For an unknown reason, Terumi gains incredible strength when near a cauldron.[9]

The formal name for Cauldrons. Also known as a 'Hell Spring' or 'Gate of Judgement,' these are located in various places around the world. It's unknown when they've existed but all Hierarchical Cities are built on top of one of these Gates.

The Gates are connected to the 'Boundary,' creating a pathway to extract energy from it, and Nox Nyctores such as Murakumo are smelted beyond them. All Seithr spews out into the world from these Gates.[10]

Another name for the Gates of Sheol. They are found in various places around the world, and are connected to the Boundary. It's unknown since when they've existed, but all Hierarchical Cities are built on top of one of these Gates.

The Gates create a pathway to extract energy from the Boundary, and Nox Nyctores such as Murakumo are smelted beyond them. All Seithr spews out into the world from these Gates.[11]