Seithr (魔素 Maso) is a particle substance which constructs everything in the world. It surges out of the Boundary and is needed to activate Ars Magus, exorcism, Drives, and magic. It's a Particle-type Program and how it was created is unknown.

Before the Dark War, seithr was a sparse substance, existing in small quantities around the world. Mages and exorcists learned to use it in both magic and exorcism. However, during the Dark War, the Black Beast appeared, a monster constructed entirely of seithr. After its death, seithr spread across the globe, swallowing it in its toxic substance, forcing humanity to retreat the mountaintops and create Hierarchical Cities. 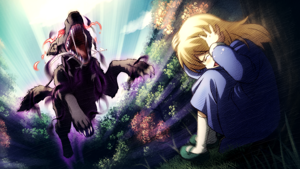 An animal mutated by seithr

In small quantities, seithr is relatively harmless to flora and fauna. In large doses, however, it creates thick toxic clouds that can cause mutations and choke anyone who breathes it in. Some species have a higher resistance to seithr than others, such as the Kaka. It appears that animals mutated by seithr, such as dogs, become feral and much more deadly. Seithr does replenish in certain areas, but time is needed. In the usage of Ars Magus, some people use more seithr in an area than others, which is used to gauge aptitude towards the Art.

The Boundary is filled with a near infinite amount of the substance, and it enters the world through cauldrons. Despite its apparent density, seithr does rise, and can reach the outer atmosphere. All things are made of seithr, including all species. In the final phase of Doomsday, the chosen were dissolved into seithr and their data was backed up by Es.

A substance spewed forth by the Black Beast, said to be the source of its activity. The defeat of the Black Beast at the hands of the Six Heroes caused it to spread, covering the entire world. While it has adverse effects on humans, the substance itself has many practical uses, and Ars Magus utilizes it.

The Boundary is filled with Seithr, and it's actually a 'Particle-type Program.' However, it's unknown how it was created. [1]