The Corpus Sepulcro: Requiem () is the eleventh Nox Nyctores. It took the shape of a giant deformed person. It was the strongest of the Noxes and was destroyed by Ex Machina: Minerva. Nine the Phantom was its sole wielder.

After the Dark War, Nine learned the truth of the world and its time-loops that were created by the Amaterasu Unit. Sickened, she vowed to stop them, and begun work on the Requiem, having it placed deep within her laboratory. To ensure no one would be able to access the Nox, several locks were put on the entrance to the workshop. Nine was shortly thrown into the Boundary by Yuuki Terumi not long afterwards, and development on Requiem was halted.

Nine would later return to resume her work on Requiem nearly 100 years later when she regained her own independence from Izanami. It was eventually discovered by Celica A. Mercury, Ragna the Bloodedge, Kokonoe, Jubei, Rachel Alucard, and Noel Vermillion. Nine defended her work and told them all the reason for Requiem's creation - to replace Amaterasu itself. After having lost to Ragna and being found by Nu-13 and Izanami, Nine set Requiem to create a frozen space-time to trap the two women and to buy everyone else enough time to defeat them, creating a one week period in which to do so; however, in doing so, Requiem would detonate.[1] Izanami managed to take the Requiem to another location, concealing it as Amaterasu. 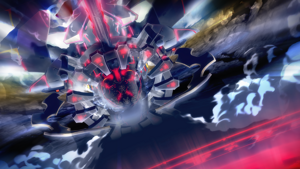 Ragna, Noel, and Minerva eventually found Requiem and Minerva sacrificed herself by charging into it, the detonation from her own reactive tank being enough to counter the explosion created by the Nox.[2]

Requiem was unique in that it was able to use Phenomenon Intervention at a rate which could rival the Amaterasu Unit itself. It was capable of several interventions in rapid succession. The strength of its detonation would be 10^31 joules and would atomize everything in a 400,000 kilometer radius - calculations performed by Izanami and confirmed by Kokonoe. [3]

The Requiem was seen as a giant humanoid figure with pure black skin and multiple red lines running down its body, making it similar to Gigant: Take-Mikazuchi in appearance. It was seen upside-down and wearing a collar made of coffins next to its amber eyes. On its chest was a red core, and multiple tubes and wires were connected to the Nox. Two arms were seen suspended below the collar.

The 11th Nox Nyctores Nine develops during the Dark Wars. It is able to trigger a massive scaled phenomena intervention.[4]

Corpus is Latin for "body" while Sepulcro is Latin for "tomb". In Japanese, the title used is 骸葬 kaizou, using the characters for "bone" and "funeral" respectively. A "requiem" is "a Mass for the repose of the souls of the dead,"[5] further tying into its theme of death. Thus Corpus Sepulcro: Requiem can be translated literally as "Body's Tomb: Requiem".