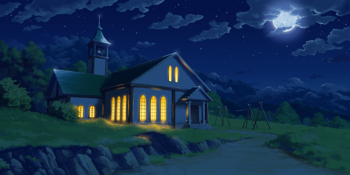 Celica A. Mercury's Church (セリカの教会) was a large church that was erected after the end of the Dark War at the site that marked the death of the Black Beast. Celica A. Mercury was the only known nun of the church itself.

In 2110, at the end of the Dark War, the Six Heroes found a location above crystals created by Order that had the ability to nullify seithr. After having slain the Beast, a church was erected over the area with Celica presiding over it. In time, Jubei sent three children into her care and they were raised inside its grounds; these children were Ragna the Bloodedge, Jin Kisaragi, and Saya. In 2192, Yuuki Terumi attacked the church, burning it to the ground and murdering Celica. In 2200, the church was completely rebuilt inside the Embryo, and Celica passed away for a second time at the church itself. [1]

The grounds of the church are lush and green, with a nearby forest that harbors raspberry bushes. [2] Celica's grave is located on the grounds and has been visited by Kokonoe when she needs to think. For some time, a barrier protected the site from being accessed by Terumi, but he manipulated Jin into breaking it. Deep under the church lay the corpse of the Black Beast, something that would become the Azure Grimoire. [3]

In the new world created by Ragna, a church very similar to Celica's has been constructed. Noel Vermillion and Lambda-11 serve as its nuns as they care for Nu-13. [4]

A small church where Ragna, Jin, Saya, and the Sister lived. It was destroyed during an attack by Terumi.[5]