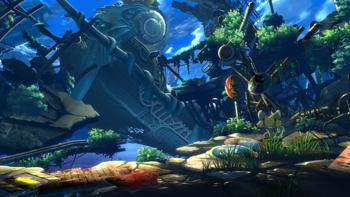 The 5th Hierarchical City of Ibukido was once the largest of the Hierarchical Cities. It declared itself the head of the Ikaruga Federation, causing the Ikaruga Civil War, and was destroyed by Gigant: Take-Mikazuchi in what became known as the Burning Fields of Ikaruga. It is currently under the jurisdiction of the Mutsuki family of the Duodecim. Izanami used the Monolith in Ibukido to help enact Doomsday.

Between 2192 and 2195, Sector Seven began several experiments in a laboratory under Ibukido in the attempt to create either a Kusanagi or a Black Beast. As a result of these experiments, known succinctly as the Ibukido Experiments, Lambda-11 was born.

On December 25, 2195, the Takamagahara System fired the Nox Nyctores - Gigant: Take-Mikazuchi on Ibukido's center. The city was burned to the ground in an instant, leaving a crater where the city once stood. Mu-12 was being smelted at the time of the explosion and managed to survive. When the war finally ended in 2197, Ibukido was left as a testament to the NOL's strength as the general public believed that the NOL was responsible for its destruction. No restoration efforts have been given to Ibukido and it has been left uninhabitable.

One of the Hierarchical Cities belonging to the Ikaruga Federation.

It was once the world's largest Hierarchical City, but it was destroyed during the Ikaruga Civil War. Not a trace of its former glory remains in the present day. Te area around ground zero is currently closed off.[1]