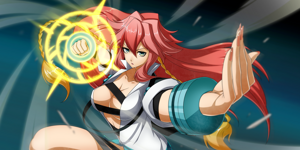 Magic is a type of Art that utilizes seithr to activate certain spells. Magic is infamous for having being combined with science to create the most widely learned Art - Ars Magus. The purest form of magic is sorcery.

Using magic involves the manipulation of seithr in the air with various incantations to convert seithr into tangible phenomenons that can be interacted with. This means that the practitioner can conjure anything from fire to paper ravens. Rare among the various types of magic is the ability to manipulate gravity, something first explored by Sechs. The ability to use magic is something that someone is born with since the ability to sense and access seithr is genetic, being passed from generation to generation.

Nine the Phantom created Ars Magus through the combination of magic and science, a creation that was helped greatly by Yuuki Terumi and his vast knowledge on seithr.[1] The reason for Ars Magus' creation was because of the genetic barrier that the majority of humanity had with learning either magic and sorcery. The barrier around Ishana was magical in nature, requiring even the Ten Sages to repair it if a tear was present.[2] The barrier prevented seithr from accessing Ishana. Ishana's Great Library held information on the theories surrounding magic, and in order to become one of the Ten Sages, one had to be exceptionally versed with magic, sorcery, and alchemy.