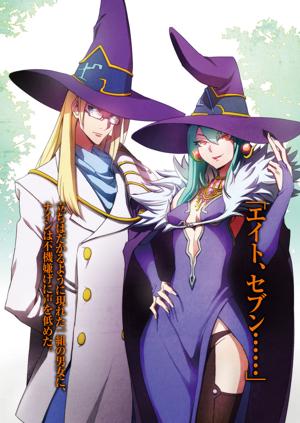 Seven and Eight, two of the Ten Sages during the Dark War.

The Ten Sages () are the directors and most powerful mages that the Mage's Guild has to offer. They are exceptional mages that have contributed in far strides to magic, sorcery, and alchemy, also being masters of all three. It is rare for their ranks to be filled all at one time.

Ten Sages are chosen because of their ability and contribution to the Mage's Guild. They are exceptional, making them leaders among the organization and are one of the few people permitted to enter the Ishana Cathedral.[1] It is unknown how exactly one is chosen, but they must undergo the Canonization Ceremony. All of the Sages can be identified with their signature hat, which has a large brim and is similar to the hats of witches found in folklore.

In the XBlaze Possibility, around 2040, the Ten Sages entered a pact with Takamagahara Organization to obtain Wadatsumi, and smeared the name of the Amanohokosaka Clan in order to do so. They attempted to open the cauldron deep below so they could find the Azure, but this plan backfired and the Sages who attempted to open the cauldron were killed in the Wadatsumi Incident.[2] Three years later, and Zwei left the Sages to travel to Japan and discover the secrets of making curry - she was considered the greatest Sage of her time, making her departure another devastating blow after the Wadatsumi Incident. Soon after, a young mage who excelled in gravity magic was chosen to become Sechs - he became the youngest Sage in history at the age of 18.

Around the year 2050, Sechs went rogue and was accompanied by Drei and Acht, who abandoned their positions to join him in his conquest to defeat both life and death so that sorrow could no longer exist; as well as this, he ventured to destroy an Embryo. Kuon Glamred Stroheim, an exceptional mage and Sech's younger sister, was sent to kill the three Sage's with the Sealed Spear: Izayoi by the Mage's Guild's elders. Drei was killed by Avenge, Acht was killed by her condition as a Drive-Union, and Sechs was killed by Touya Kagari, although his soul is said to wander the Boundary.[3][4] The elders were killed by Freaks and the organization was thrown into a disarray. Zwei returned to the Magister's City of Ishana, and Kuon was trained by her to become a member of the Ten Sages.[5] Many members of the organization had been lost in the last 10 years - they then underwent a reformation because of their past mistakes.

In the BlazBlue Possibility, the Ten Sages were The One, Two, Three, Four, Seven, and Eight. The One was involved with an experiment with Shuichiro Ayatsuki and Yuuki Terumi, and brought about the Black Beast on the world, starting the Dark War. The One, real name Relius Clover, was sent decades into the future as he was swallowed by the Beast. In 2106, Konoe A. Mercury was chosen to become Nine, and was made the Sage with the ultimate authority concerning the Dark War - she was also the only Sage in history to have become one while still a student. She became part of the Six Heroes and invented Ars Magus - Nine is the most famous of all the Sages and her name reverberates across history. Both Nine and Eight died immediately following the war, while the other Sages went missing. The concept of the Ten Sages was dissolved as the Mage's Guild fused with the Orbis Librarius Norma to become the Novus Orbis Librarium.

A symbol of the Mage's Guild itself, the supreme decision-making body in the organization. Even among the Mage's Guild, only those of the highest class are selected to serve in such a vital position. Being appointed is considered a special privilege.

While they're called the 'Ten Sages', there are presently not ten of them, as it takes considerable talents and abilities to be given such a title[6]