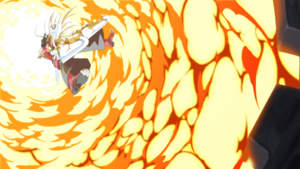 The beginning of the Looping World

The Looping World was a series of timeloops that began on January 1st, 2100AD and ended on January 1st, 2200AD whenever the Central Fiction died. It was created by The Origin using the Amaterasu Unit and managed by the Takamagahara System. Each time loop was called a phase.

Over 725 different phases occurred, each one presumably spanning 100 years.

When The Origin rebuilt the world after the Prime Field War, she created the BlazBlue world. When the date moved to the 1st of January, 2100AD, the Looping World began. This was also the beginning of the Dark War.

In 2200AD, Ragna the Bloodedge and Nu-13 entered a cauldron in the 13th Hierarchical City of Kagutsuchi, becoming a Black Beast. The Beast was sent back to December 31st, 2099AD, just before the Looping World began and ensuring that the Dark War would be a permanent event fixed in each phase. In phase 299, Jin Kisaragi was also sent back to the same date, fixing his existence as a part of the Dark War and allowing him to become Hakumen a few weeks later.[1][2] 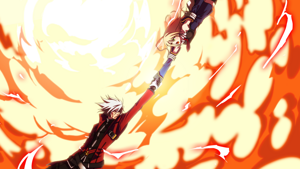 The end of the Looping World

Because the BlazBlue world was built around the Central Fiction (Ragna the Bloodedge), meaning that whenever he died, the world would reset. His death was guaranteed to happen every time a phase entered December 31st, 2199AD thanks to Nu-13 or the activation of Gigant: Take-Mikazuchi by the Takamagahara System. In the final phase, Noel Vermillion broke the Looping World by saving Ragna from Nu, becoming the Eye of the Azure. Rachel Alucard, the Onlooker of the world, broke the rules she was bound to in order to stop Take-Mikazuchi from destroying Kagutsuchi and everyone in it.[3]

When the Looping World broke, it was immediately followed by a Continuum Shift triggered by Noel being unable to control her power as the Eye. Within the phases, there were two Onlookers - Clavis Alucard, who watched between the years 2100 - 2106, and his daughter Rachel, who oversaw the events unfolding between 2106 - 2199. They retained their memories of each phase, as did the Takamagahara System, who forcibly reset the world by killing Ragna with Take-Mikazuchi whenever it did not reach a favorable conclusion. Onlookers, as well as Yuuki Terumi, attempted to subtly move the world and events to break the seemingly infinite looping phases.

It was the knowledge of the Looping World and Prime Field War that sent Nine the Phantom into her attempts to destroy Amaterasu and The Origin. Knowing that her father, Shuichiro Ayatsuki, and younger sister, Celica A. Mercury, would be forced to relive their deaths and suffering again and again led her to pursue both a solution and revenge. To this end, she created the Corpus Sepulcro: Requiem.[4] Relius Clover believed the world was insane, knowing everything was only built from a finite version of The Origin's memories.