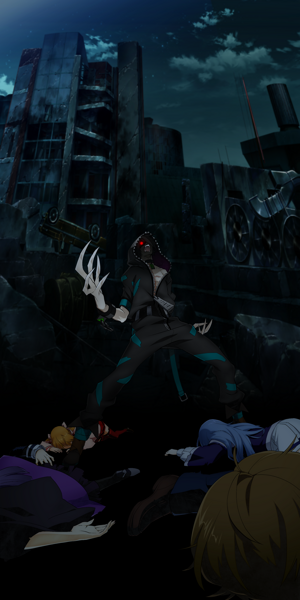 The Restricted Ward, known as The Ward to locals, is a location in Shin Yokozaki City. The site of the Wadatsumi Incident, it is closed off to civilians.

Prior to the Wadatsumi Incident, the Wadatsumi Research Facility was here, where research was conducted on the T-System and the Embryo. Prior to its acquisition by the Takamagahara Organization and the construction of the research facility, it was known as the Legendary Lands of Wadatsumi, a mountainous area sacred to the Amanohokosaka Clan.

Since before recorded history, the Amanohokosaka Clan guarded this area, known as the Legendary Lands of Wadatsumi. It was here that the Azure Shrine Maiden sacrificed herself to seal a Black Beast within the Boundary using a cauldron. Since then the lands have been guarded by the Amanohokosaka Clan to prevent calamity, but over millennia, their mission has been lost to time. Eventually, the Magic Guild brought the clan to ruin, forcing them to sell the lands to the Takamagahara Organization.[1]

Takamagahara leveled the lands and built the Wadatsumi Research Facility on top. The goal of the facility was to create the T-System using the cauldron, the Embryo, and the Origin of the Grimoire. During the creation of the T-System, the Grimoire went out of control and killed over 3000 people , and was only subdued by the Embryo. This event was christened the Wadatsumi Incident; Ryouko Kagari was scapegoated as the cause by Souichiro Unomaru.[2] Because of the incident, the area was polluted with high levels of seithr and was sealed off to civilians. Drive-Unions, attracted by the seithr levels, would flock to the area. What was once the Wadatsumi Research Facility then became known as the Restricted Ward.

The Mitsurugi Agency would regularly send in their Sleipnir soldiers to either detain or execute the Drive-Unions that made their residence within the Restricted Ward. Goro Joizumi was detained here.[3] Unomaru made the abandoned research facility as his base of operations, having created the Es-N within the space. Unomaru's plans to recreate the T-System were foiled, however, by Touya Kagari, Es, Mei Amanohokosaka, and Kuon Glamred Stroheim.[4] Es was later reborn within the Restricted Ward[5], and it served as the setting for the final battle against Freaks. Some months later, Touya, using the power of the Origin of the Grimoire, cleaned the Ward of its seithr.[6]

The Restricted Ward. Known as "The Ward" by locals, it's the area where the former Wadatsumi Research Center stood. Due to serious health concerns, the area is all but abandoned and has been taken over by criminals and other unsavory types. Also the source of numerous urban legends.[7]