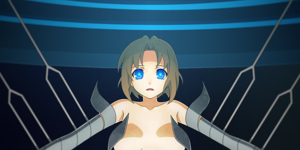 The T-System powered by Hinata Himezuru.

The T-System, short for Takamagahara System, was a construct designed to use Phenomenon Intervention in order to completely prevent crime at the cost of humanity's freewill.

The T-System was originally envisioned by the Takamagahara Organization. Using an Embryo powered by both the Boundary and the Origin of the Grimoire, the T-System would access Phenomenon Intervention on a scale that would allow it to prevent crimes before they happened. Takamagahara paired with the Magic Guild to make this vision a reality and began experiments 10 years before the events of XBlaze Code: Embryo.

Takamagahara discovered a young girl who possessed the Embryo and took her in. They had nearly completed the T-System, but Ryouko Kagari stopped it. This, combined with a mistake from members of the Ten Sages who were present, lead to the Wadatsumi Incident. Souichiro Unomaru, one of the scientists working on the T-System, attempted to reactivate it but was unsuccessful. Both the girl with the Embryo and the Origin of the Grimoire went missing afterwards.

After the Wadatsumi Incident, Unomaru continued to work on the T-System in secret despite the dissolution of the Takamagahara Organization. To obtain the Embryo he created Es and then later the Es-N. Eventually, Unomaru managed to secure Hinata Himezuru, who was the girl used in the original experiments. When Touya Kagari came to rescue her, the Es-N manipulated his Origin of the Grimoire in order to open up the nearby cauldron, thereby completing the T-System once more.[1] The majority of the times that this happened and that the T-System was completed, however, Hinata would forcibly use Phenomenon Intervention to rewind time back before its completion.

A sophisticated information control system created by the Takamagahara Organization, it is essentially a powerful computer simulator capable of predicting the intentions of all mankind and nudging any individual to more beneficial behaviors. Souichiro Unomaru was trying to make it a reality.[4]